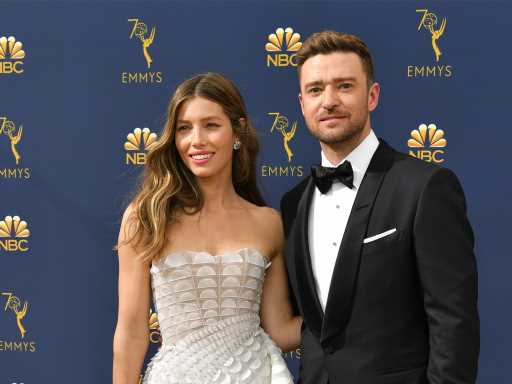 On the latest episode of the Armchair Expert, celebrity dad and multi-hyphenate superstar Justin Timberlake bonds with podcast host extraordinaire Dax Shepard about navigating masculinity and raising kids in a world with gender norms that are, thankfully, so different from when they were kids. While Timberlake and wife Jessica Biel have two sons, Silas, 5, and new baby Phineas, Shepard is raising two girls, Lincoln, soon-to-be-8, and Delta, 6, with Kristen Bell.

Both the former Parenthood star and Timberlake, whose movie Palmer is out on Apple TV+ this week, share somewhat similar upbringings. Both were children of divorce in places where the definition of “man” had some pretty specific requirements — and which they are trying not to pass on to their kids. Shepard had four stepfathers of varying likability and hails from the suburbs of Detroit, while Timberlake grew up with one “amazing” stepdad in the country outside Memphis.

“My town was real blue collar, a lot of violence … a lot of shaming dudes for being girly,” Shepard said. “I didn’t have a dad around, so I didn’t have a guy telling me … ‘You’re on your way to being a proud man.’ So anything my peers deemed masculine or brave, I ran towards, because I just wanted this male approval so much.”

Timberlake empathized, saying where he grew up, “you either played football or basketball or people considered you a sissy.” And while his stepdad is an amazing man who taught him “so much about how to be a gentleman,” Timberlake also really admired his very traditionally masculine grandfather.

“My grandfather was captain of the fire department in Memphis for 30 years, then became a contractor. He was like John Wayne, manly, and barrel chested, and had a saying for everything,” Timberlake said. “I’d say, ‘This kid at school was picking on me, Papa, and he’d say ‘That’s not your dog.’ What does that mean?!” Timberlake joked. “He came from a generation of ‘rub some dirt on it,’ don’t be a b****, like that type of thing — this whole generation of men who were told not to feel. And now we have something to figure out, because now we’re being allowed to feel. Raising young males is one thing, and raising young females right now is another thing. There’s a lot to unpack.”

Shepard has joked many times how happy he is to have daughters instead of sons out of anxiety over how to properly parent boys in certain situations.

“I don’t envy you at all,” he told Timberlake, “because here’s the moment I always fear [with boys]: Someone is going to pick on them at school, they’re going to come home upset, I’m going to hate that, and I’m going to tell them what I know, which is, well, either get punched for the rest of your life or just slug them once and then it’s over. I wouldn’t know what else to say. You’re weighing, do I want my kid to be a victim so that he can help this transition to where guys don’t hit each other anymore? Do I want my kid to be the sacrificial lamb? That seems so scary to me.”

His worries hit home for Timberlake, who quipped back, “Thanks, I’ll be carrying that around for a week.” Shepard joked back, “Yeah, you’d better have your speech ready.”

Luckily, as Timberlake’s boys are still pretty little, he should have plenty of time to come up with a strategy — and we’re sure Biel will be an equal partner in such an important talk!

These celebs are taking important steps to speak to their children about racism: