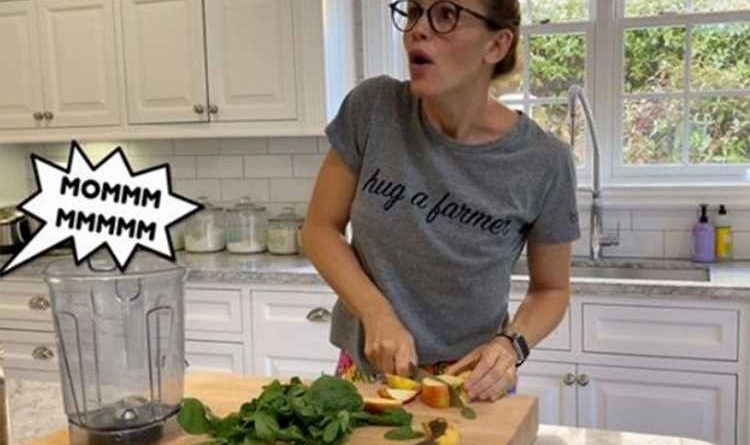 Jennifer Garner is giving fans a glimpse into her life at home amid the ongoing coronavirus pandemic.

On Monday, the actress, 48, got candid about the realities of the return of the school year while working remotely when she shared a homemade promo for her organic food company Once Upon a Farm.

The ad, which was shot in Garner's home, features the mother of three scrambling to prepare snacks for her kids — son Samuel Garner, 8, and daughters Seraphina Rose Elizabeth, 11, and Violet Anne, 14 — before a conference call. After struggling to make a smoothie, the star reaches for a few packets of cold-pressed applesauce to save time.

"Whatever Back-to-School means for you this year—it’s here! 🎉 🙈🙃 If you’ve been hired to teach Reading, Writing and ’Rithmatic 😬—let us make your job as Snack Lady a whole lot easier— with homemade tasting deliciousness and without added sugar," Garner wrote in the caption, tagging her brand.

"If my house is any indication, you are busy, Mamas!—and we are here to help," she continued.

Garner capped off her post with the hashtag: "The Juggle Is Real."

Whatever Back-to-School means for you this year—it’s here! 🎉 🙈🙃 If you’ve been hired to teach Reading, Writing and ’Rithmatic 😬—let us make your job as Snack Lady a whole lot easier— with homemade tasting deliciousness and without added sugar. We play well with others (hello, @pipsnacks & @partakefoods 🤗) or we’re happy on our own. If my house is any indication, you are busy, Mamas!—and we are here to help. ❤️🧡💛 @onceuponafarm 💚💙💜 #2020 #thejuggleisreal

Garner recently opened up getting her children ready for back to school, sharing that her oldest daughter Violet is "taking an incredibly tough load of classes" as she begins her first year of high school virtually.

"I feel like the transition into school for her feels almost unfair because I know she's going into a real crunch of a year, but without the anticipation of being with her classmates and just [physically] going to school first day," she said on Friday's episode of Dear Media's Raising Good Humans podcast.

"I just want to help her shift gears in a healthy way, and also to set the boundaries that I would set if she had an early bus ride or whatever, that she does have to go to bed," Garner continued. "I stay up till they're all asleep and I can only go so far, but definitely we've all pushed later than we normally would."

As for Seraphina, who's entering her final year of elementary school, "I just want her to have a great time, and I want to find a way for her to engage with friends safely and to feel like school is alive and vibrant, because she's a great student and she deserves [it]," Garner said.

According to Garner, her "little guy" Samuel is "really eager and excited" to start his academia again.

"I just want to keep that alive for him and want him to see himself as having agency in his education and as intelligent and a hard worker," she shared. "And I think remote learning can suck that idea of yourself from you a little bit."

While the Alias alum doesn't "get [her] kids a new backpack every year," as she believes they "have too much stuff," Garner said that she may just make an exception this year, considering the circumstances: "I think this is a year where … I think that [they] do need to get a new backpack and a new lunchbox."