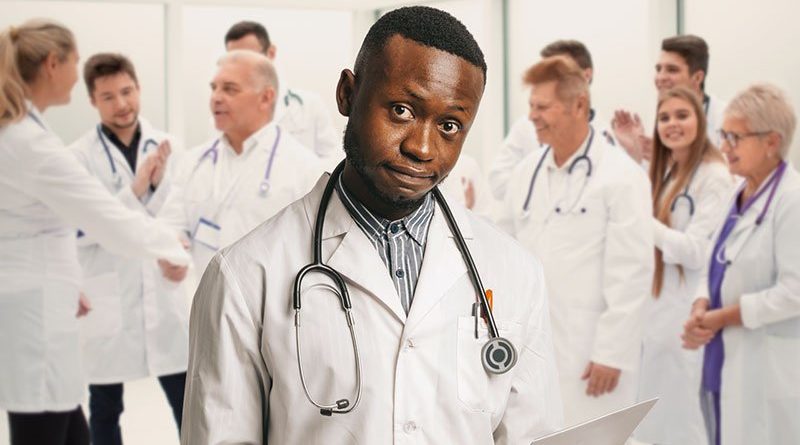 Researchers project that it may take up to a century before the percentage of Black and Hispanic medical residents reflects that of the general population.

Moreover, in over a decade, medicine has made little to no progress toward increasing the proportions of Black and Hispanic residents, according to an analysis by Christopher Bennett, MD, of the Department of Emergency Medicine, Stanford University School of Medicine, Stanford, California, and colleagues.

Although efforts to diversify the physician workforce have been evolving for decades, they are falling woefully short, the authors conclude.

The research was published online in the Journal of General Internal Medicine.

Among the top specialties, radiology was the only one with a statistically significant increase in the proportion of Black trainees during the 10-year study period.

The proportion of Black trainees in that specialty increased from 2.25% to 3.63% (odds ratio, 1.04; 99.75% CI, 1.02 – 1.07). Even with those gains, modeling indicates that “it could take radiology 77 years to reach levels of Black representation comparable to that of the US population,” the authors write.

Other specialties were making gains toward population-reflective representation for Hispanic residents, but the projections indicate that it will take many decades to achieve parity.

Even Longer Until Physician Workforce Catches Up

“In addition to getting folks into residency, we’re going to have to continue to support them after residency and make sure we continue to recognize it’s not just a single step as much as the entire pathway problem,” Bennett said.

The authors note that volumes of research have demonstrated that diversity among physicians directly benefits patients through increased healthcare access in underserved communities and increased patient compliance and that broader social perspectives lead to better outcomes.

Bennett says that although this study wasn’t designed to identify the reasons for the diversity lag, many experts point to medical school recruitment as an early point at which efforts to diversify the workforce break down.

The researchers used logistic regression and trend modeling to make their projections. A limitation of the research is that they assumed that racial-ethnic proportions would remain at 2018 levels. Actual time to parity will vary with population changes.

The calculations also don’t account for “the fact that we’re seeing more applications from students who identify as non-White or the growing heterogeneity of the general population,” Bennett said.

The American Association of Medical College reports that in the first year of the pandemic, the number of Black and Hispanic applicants to medical school increased by double digits.

The research also doesn’t account for programs such as the partnership between Morehouse School of Medicine, a historically Black medical school in Atlanta, Georgia, and the CommonSpirit Health system, which created a 10-year, $100 million program to train more Black physicians, as reported by Medscape Medical News.

Alexa Mieses Malchuk, MD, MPH, an assistant professor and the diversity liaison for the Department of Family Medicine at the University of North Carolina at Chapel Hill, told Medscape Medical News she is less concerned with predicting what will happen decades into the future than addressing the lack of progress or the worsening of circumstances over the past decade.

She noted that radiology was the only specialty with a statistically significant increase in Black physicians but that the size of the increase is “abysmal.”

“This is a huge problem,” Mieses Malchuk said.

Some progress has been made by medical schools’ taking a more holistic look at applicants and deemphasizing performance on standardized testing, she said.

“We need to be more proactive in nurturing students from diverse backgrounds, and I mean as early as elementary school,” she said.

“We have to give everybody the tools they need to be successful, rather than assuming if everyone is given the same tools, they will be successful. There’s a big difference there,” she explained.

She uses her own experience as an example. When she was in college in New York, she was supported by the state’s Search for Education, Elevation and Knowledge (SEEK) program, which was designed to help economically disadvantaged students.

She was able to be a full-time student, to graduate from school debt free, and to work at the same time. She went to college for a fifth year tuition free, all while living at home and helping support herself and her family.

Rather than being under pressure to finish a full premed curriculum in the traditional window, she said, she was able to get a bachelor’s degree in biology, to study abroad, to work full time, and do internships on other continents ― things that made her a more attractive candidate for medical school and eventually a better doctor.

Financial Worries Can Be Overwhelming

Cochran, a Black physician, told Medscape Medical News that although there are many factors to the problem, the primary one is economic.

A higher percentage of Black and Hispanic students are of lower income than White students. To become a physician requires 4 years as an undergraduate and 4 years of medical school, after which you receive modest income as a resident for at least 3 years. Only then can one make enough to begin to pay back their medical school debt. Other professions seem more within reach, he explained.

Students of color see that PhD students receive stipends while they earn their doctorates. They start to make a good salary while in their early 20s, which allows them to start erasing their debt. This is a different financial track than medicine offers.

“Yes, they’re not going to make as much as physicians in the end, but the road to get there is not as arduous economically,” he said.

Cochran, who is immediate past president of the American Medical Student Association, said he has advocated for increasing residents’ salaries and easing the financial burden of becoming a physician so that medicine becomes a viable choice for more people.

Telling people who come from a low-income household that they have to wait until they are in their 30s to start to erase medical debt will continue to cause people to turn away from medicine, Cochran said.

He sees Bennett’s research as “motivating,” inasmuch as its dire projection emphasizes that “we are nowhere near where we need to be” in representing cultural, racial, and ethnic diverity in medicine.

Mieses Malchuk and Cochran have disclosed no relevant financial relationships.

Marcia Frellick is a freelance journalist based in Chicago. She has previously written for the Chicago Tribune and Nurse.com and was an editor at the Chicago Sun-Times, the Cincinnati Enquirer, and the St. Cloud (Minnesota) Times. Follow her on Twitter at @mfrellick.