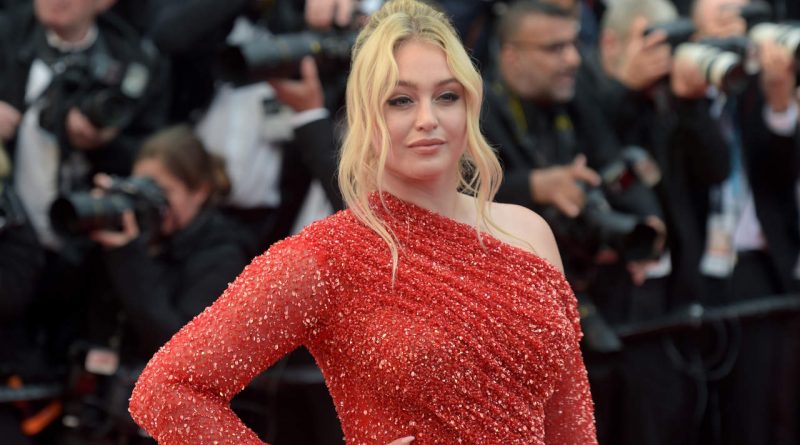 Iskra Lawrence is getting closer to becoming a mama! The British model, 29, recently debuted her baby bump on social media, and her fans are loving it.

On Monday, November 25, Lawrence shared a cheeky video of herself dancing while naked to Snoop Dogg to celebrate the four-month mark of her pregnancy. In the clip, a group of friends lower a towel to reveal her growing baby belly, with the number “4” painted on her stomach in silver.

“4 months has flown by! And my belly has finally popped,” Lawrence wrote when she posted a video on Sunday. “Celebrated 20week half way (so now 5months) on this magical journey with a stunning photoshoot with my girl.”

But that wasn’t her only preview for her fans. The next day, the mom-to-be shared a series of shots in her underwear from a recent photo shoot that gave an even closer look at her bump.

“Growth” she captioned her post, then thanked her team for the support throughout her pregnancy.

Her 4.5 million fans were quick to celebrate her exciting news, and she received thousands of likes and comments on both posts.

The mom-to-be announced her pregnancy in early November, when she shared a sweet series of photos with her boyfriend, music producer Philip Payne.

“It’s not just the two of us anymore, we’re soon to be a family of 3,” she captioned that post.

It’s not just the two of us anymore, we're soon to be a family of 3 ❤️. . When @Philipapayne ran out and got us six boxes of #ad @firstresponsepregnancy Early Result tests, our lives changed forever. We were so shocked when we saw those two lines and we knew for sure we were having a baby🤱🏼 Right now we’re 17 weeks and 3 days pregnant! 🤰🏼 And I can't wait to share with you what these last 4 months have been like. I’ve never been more excited to meet anyone, and Philip and I are in love with our mini baby P bump 🥰 I’m well aware of the struggles many women face with infertility and how lucky I am. That is why I’ll be giving away $10,000 to help and support one of you in your pregnancy journey (more deets coming soon). Thank you so much #firstresponsepregnancy for supporting me and all of the work you do to support couples struggling to conceive. It’s something very close to my heart with many of my best friends and family members experiencing these challenges. Can’t believe I’m finally telling the whole damn world our magical news sending you all lots of love xx #2MeansYes #preggo #pregnancyannouncement #17weeks #pregnant

Now that Lawrence has hit the four-month point, let's hope to see many more exciting baby bump photos—and plenty of adorable couple photos with Payne, too.

To get our top stories delivered to your inbox, sign up for the Healthy Living newsletter