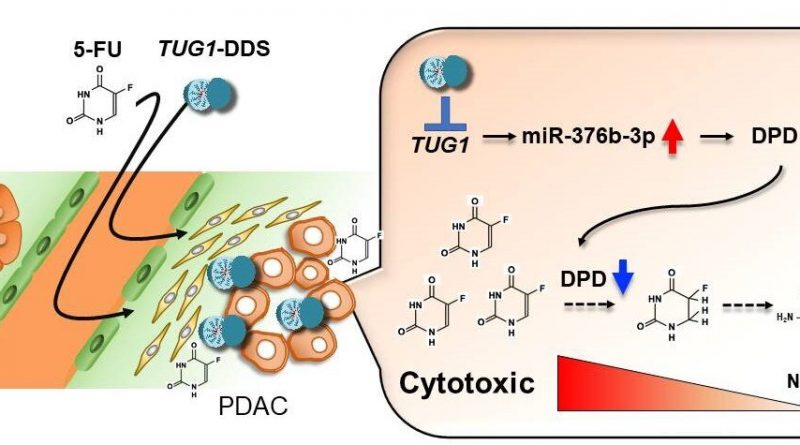 Nagoya University researchers and colleagues in Japan have uncovered a molecular pathway that enhances chemotherapy resistance in some pancreatic cancer patients. Targeting an RNA to interrupt its activity could improve patient response to therapy and increase their overall survival.

“Pancreatic cancer is one of the most aggressive human malignancies, with an overall median survival that is less than five months,” says cancer biologist Yutaka Kondo of Nagoya University Graduate School of Medicine. “This poor prognosis is partially due to a lack of potent therapeutic strategies against pancreatic cancer, so more effective treatments are urgently needed.”

Kondo and his colleagues focused their attention on a long noncoding RNA (lncRNA) called taurine upregulating gene 1 (TUG1). lncRNAs are gene regulators, several of which have recently been identified for helping some cancers resist chemotherapy. TUG1 is already known for being overexpressed in gastrointestinal cancers that have poor prognosis and are resistant to chemotherapy.

The researchers found TUG1 was overexpressed in a group of patients with pancreatic ductal adenocarcinoma. These patients were resistant to the standard chemotherapy treatment 5-fluorouracil (5-FU), and died much sooner compared to cancer patients with low TUG1 expression levels.

“Our data provides evidence that our therapeutic approach against pancreatic cancer could be promising,” says Kondo.