Home » I want my daughters to know what I didn’t: your weight is not your worth

When I was growing up, my mum never commented negatively on my body. But then, she didn’t need to.

I learned enough from watching her battle with her own body; alternately starving, stuffing and, for a time, purging, too. I learned her body was never acceptable as it was, instead some perversion that required punishment. 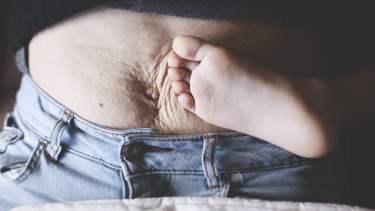 When I descended into my own eating disorder as a 12-year-old, missing nearly two years of school as I teetered on the edge of heart failure, it wasn’t her fault. In fact, it speaks volumes that she has given permission to share this story because she doesn’t want to see it perpetuated.

My poor body image and eating disorder were the results of a messy interplay between my personality traits (low self-esteem and perfectionism) and my environment, along with a lack of capacity to reconcile the two.

But when a family member recently asked how I feel about my own eating disorder experiences and body image since becoming a mother to one daughter and with a second girl on the way, I replied: “Conscious.”

Just as my mum’s body image has shaped mine to a large extent, my body image will shape my daughters.

Research has found about half of six to 12-year-olds are dissatisfied with their bodies, 81 per cent of surveyed 10-year-old girls say they are more afraid of getting fat than getting cancer, while, in another survey, two-thirds of 18 to 25 year-olds said they would rather be mean or stupid than fat.

Media, societal expectations and our peers all play a role. Our parents, however, are our primary role models, and also our primary line of defence against "diet-think".

“We know children have an internalised sense of fat-phobia by the age of three or four,” says clinical psychologist and founder of Untrapped, Louise Adams. “Our kids are little sponges who pick up the messages we send, both verbal and non-verbal. They take on a lot more than we realise.”

One study found five-year-olds whose mothers admit to dieting are twice as likely to have ideas about it for themselves. Separate research found girls who thought their mothers wanted them to be thin were two to three times more likely to worry about losing weight.

Just as my mum’s body image has shaped mine to a large extent, my body image will shape my daughters.

The point is not to shame mums or create guilt. After all, we are all in this “soup of diet-culture thinking which makes us scrutinise our bodies”, Adams says.

“Mothers have been exposed to this very same relentless training so it’s no surprise that we inadvertently pass that on to our kids. There’s no blame attached to that, but I suppose the whole body positivity movement is about trying to help mums understand that the way they relate to their own body will rub off on the next generation.”

Having awareness about the influence parents have on their children’s body image also involves being aware of how we relate to their bodies.

Parents report worrying their child will be bullied or ridiculed if they are bigger (overweight children are four times more likely to report problems at school) or being accused of being bad parents if their child is not thin.

“I want my son to be skinny,” one mother told The Times Magazine in a feature on how our fear of obesity is driving a generation of parents to obsess over their children’s weight. “I feel dreadful saying it, but it’s true. He kept saying to me, ‘Mummy, do these jeans make me look fat?’ And I said, ‘No, no,’ but I had to have a quick check.”

Adams explains that, when parents say they want their kid to be skinny, what they’re really saying is: "I want my kid to be accepted."

“We can teach them to push back against this narrow-minded point of view that there’s only one way to fit in and only one way to have a body,” she says. “Body positivity is about all kinds of diversity, so it’s teaching our kids to be more tolerant and more inclusive in general.”

This, of course, starts with us learning to be more tolerant and accepting of our own bodies and learning to treat them with care regardless of their size.

Having awareness about the influence parents have on their children’s body image also involves being aware of how we relate to their bodies.

“We have to wake up and ask ourselves the question, ‘Why do I hate my body and when have I ever been allowed to just relax and like my body?’” Adams says. “Body dissatisfaction happens to thin women and big women and everyone in between.”

It took me until my 30s to create a healthy relationship with my body that was not based on control or size. I want my daughters to know their weight is not their worth and to enjoy being in their bodies for all they are capable of.

The body positivity movement shows we can recreate our image in our own eyes. And by changing the way we see ourselves, our children are given tacit permission to see themselves in a different light too; a light worth loving.