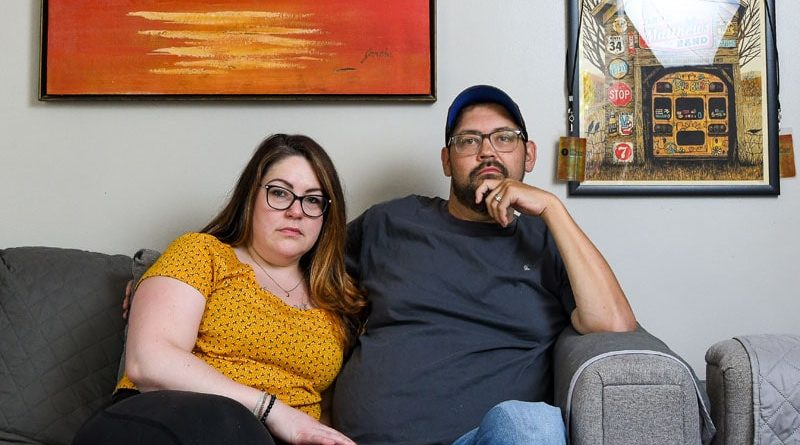 The collection practices are commonplace among all types of hospitals in all regions of the country, including public university systems, leading academic institutions, small community hospitals, for-profit chains, and nonprofit Catholic systems.

Individual hospital systems have come under scrutiny in recent years for suing patients. But the KHN analysis shows the practice is widespread, suggesting most of the nation’s approximately 5,100 hospitals serving the general public have policies to use legal action or other aggressive tactics against patients.

And although industry officials say they are careful about how they target patients for unpaid bills, few institutions have renounced what federal rules call “extraordinary collection actions,” even as medical debt forces millions of Americans to cut back on food and other essentials, drain retirement savings, and make other difficult sacrifices.

At the same time, a majority of hospitals scrutinized by KHN effectively shroud their collection activities, publicly posting incomplete or in many cases no information about what can happen to patients if they can’t pay.

These are among the findings of an examination of billing and financial aid at a diverse sample of 528 hospitals across the country. Over the past year, KHN investigated each of these hospitals, reviewing thousands of pages of policies and other documents. The reporting also included thousands of telephone and email inquiries and interviews to obtain and clarify how hospitals handle patients with unpaid bills.

Some hospitals did not respond to multiple requests for information. But KHN was able to gather details about most. From them, a picture emerges of a minefield for patients where a trip to the hospital can not only produce jaw-dropping bills but also expose patients to legal risks that jeopardize their livelihood. Among the findings:

“People don’t know what’s going to happen to them. It can be terrifying,” said Tracy Douglas, a consumer attorney at Bet Tzedek Legal Services in Los Angeles. Douglas described one older woman she worked with who was afraid to seek financial assistance from a hospital because she worried the hospital would seize her home if she couldn’t pay.

Taken Aback by How Callous They Have Been

The impact of these collection practices can be devastating.

Across the U.S. health care system, medical debt is taking a fearsome toll on patients, forcing more than half of adults with health-related debt to make difficult sacrifices, including taking on extra work, changing their living situation, or delaying their education, a  KFF  poll conducted for this project found.

Basit Balogun was a freshman at Lafayette College in Pennsylvania when a heart attack caused by a previously undetected birth defect landed him in the hospital. Because his insurance had lapsed, Balogun, whose family is from Nigeria, was hit with bills amounting to tens of thousands of dollars.

When he couldn’t pay, the hospital reported him to a credit agency, which he discovered only after he’d graduated and was trying to rent an apartment in New York City. “I kept getting rejected and rejected,” Balogun recalled. “I was desperate.”

Nick and Elizabeth Woodruff also had their faith shaken by hospital debt collectors. Nick was sued by Our Lady of Lourdes Memorial Hospital in Binghamton, New York, where he’d received care for a dangerous foot infection. 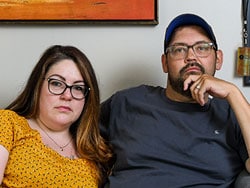 Elizabeth and Nick Woodruff of Binghamton, New York, were sued for nearly $10,000 by the hospital where Nick’s infected leg was amputated.

Despite having insurance through Nick’s work at a truck dealership, the couple were buried in bills, forcing them to withdraw money from their retirement accounts and borrow from family. When they still couldn’t make all the payments, the hospital, a Catholic institution owned by the Ascension chain, took them to court, and in 2018 they were ordered to pay more than $9,300.

“This hospital boasts Catholic values and states they take pride in their charity work,” said Elizabeth, a social worker, “but I am taken aback by how callous they have been.”

Hospital spokesperson Lisa Donovan subsequently told KHN this was an “administrative oversight.” “Lourdes is reviewing matters to ensure that all legal activities have been disposed/dismissed,” she said in an email.

Holes in the Charity Care System

Many hospital officials say they are obligated to collect what patients owe. “We don’t want to promote the concept that medical bills just go away, especially for those who are able to pay,” said Michael Beyer, who oversees patient accounts at Sanford Health, a South Dakota-based nonprofit with clinics and hospitals across the U.S. and abroad.

Hospital leaders also stress the industry’s commitment to helping low-income patients and others who can’t pay their bills. “Hospitals are doing a lot,” said Melinda Hatton, general counsel at the American Hospital Association. “Is it perfect out there? No. But I think they should get credit for trying pretty hard.”

Charity care is offered at most U.S. hospitals. And nonprofit medical systems must provide financial aid as a condition of not paying taxes, a benefit that saves the industry billions of dollars annually.

At many medical centers, however, information about financial assistance is difficult or impossible to find. About 1 in 5 hospitals researched by KHN, including public university systems in five states, don’t post aid policies online.

The University of Mississippi Medical Center disclosed its policy only after KHN filed a public records request. Many hospitals prominently place a link on their homepages for patients to pay a bill, but then require people to click through multiple pages to find information about financial aid.

Visitors to the website of Opelousas General Health System in Louisiana who click on the “Patient Resources” tab can learn that the Lil’ General Café serves panini and pancakes, but they won’t find any information about getting help with medical bills.

Applying for aid can also be extremely complicated, requiring patients to produce exhaustive amounts of personal financial information, KHN found. Standards vary widely, with aid at some hospitals limited to patients with income as low as $13,590 a year. At other hospitals, people making five or six times that much can get assistance.

About two-thirds of the hospitals researched by KHN require patients to report their assets, sometimes in great detail. Centura-St. Anthony Hospital, a Catholic medical center in suburban Denver, notes in its policy that in reviewing patient assets it may count crowdfunding or social media accounts patients have set up to help pay bills. Other hospitals ask patients to report the make, model, and year of cars they have.

“The system doesn’t work,” said Jared Walker, founder of Dollar For, a nonprofit that has helped thousands of people across the country apply for financial aid. “Patients can’t find the information they need. Half the time, when they do apply for assistance, they never hear back. Basically, hospitals do what they want, and there is no accountability.”

Sent to Collections or Sued

In many cases, patients who should qualify for assistance are instead targeted by bill collectors, whether by accident or by design.

“Every week or so we get a call from someone who should have qualified for aid, but they weren’t enrolled,” said Michele Johnson, executive director of the nonprofit Tennessee Justice Center.

A 2019 KHN  analysis of hospital tax filings found that nearly half of nonprofit medical systems were billing patients with incomes low enough to qualify for charity care. Earlier this year, Washington state sued hospitals belonging to the nonprofit giant Providence after uncovering that the system trained its collectors to aggressively pursue even patients who should have qualified for aid.

But CommonSpirit hospitals still report patients to credit rating agencies, according to the chain’s  published  policies.

Credit reporting, a threat that is supposed to induce patients to pay, is the most common collection tactic, KHN’s analysis and other data shows. Fewer patients are actually taken to court.

But more than two-thirds of policies obtained by KHN allow hospitals to sue patients or take other legal actions against them, such as garnishing wages or placing liens on property.

This includes half the hospitals earning top spots on the U.S. News & World Report’s annual scorecard — medical centers such as the Mayo Clinic, Cleveland Clinic, and Massachusetts General Hospital.

Major nonprofit systems such as Kaiser Permanente, Trinity Health, and Northwell Health will also take legal action against patients, according to their policies or spokespeople. America’s largest for-profit hospital chains — HCA Healthcare and Tenet Healthcare — don’t post collection policies, but don’t sue patients, according to spokespeople. Other investor-owned chains, such as Community Health Systems, will take patients to court.

Hospitals with policies allowing them to sue patients tend to have only slightly higher profits than those that don’t sue, KHN found by comparing financial data that hospitals submit annually to the federal government.

The same is true of hospitals that sell patient accounts, a practice in which medical providers typically package a group of outstanding bills and sell them to a debt-buying company, usually for a small percentage of what is owed. Debt buyers then keep whatever they can collect.

Officials at many hospitals that sue say they rarely take that step. And spokespeople at several medical systems said they have effectively stopped taking patients to court even if their policies still allow it.

But in many cases, hospital policies haven’t changed, leaving patients in legal jeopardy, as was the case at the Ascension hospital in New York that continued to file lawsuits against patients.

A few hospitals have barred all aggressive collections, including two of California’s leading academic medical centers at UCLA and Stanford University. So too have the University of Vermont Medical Center and Ochsner Health, a large New Orleans-based health system.

That can make a difference for patients, data suggests. A recent analysis by the Consumer Financial Protection Bureau found that while medical debt is widespread across the Appalachian region, one notable exception is western Pennsylvania.

Residents there have fewer past-due medical bills on their credit reports than the national average. This region is dominated by the Pittsburgh-based UPMC hospital system, which prohibits aggressive collection actions, including reporting patients to credit agencies.

In neighboring West Virginia, by contrast, the incidence of medical debt is more than 50% above the national average, the CFPB found. That state’s largest hospital system — operated by West Virginia University — not only reports patients to credit agencies but will also sue patients, garnish their wages, and place liens on property.

Elected officials in some states have begun to put limits on hospital bill collecting. In 2021, Maryland barred hospitals from placing liens on patients’ homes and protected low-income patients from wage garnishments. California recently restricted when hospitals could sell patient debt or report patients to credit bureaus.

But these states remain the exception. And hospitals that have voluntarily given up aggressive collections are in the minority: Just 19 of the 528 hospitals researched by KHN have publicly posted policies barring “extraordinary collection actions.”

Mark Rukavina, who spent decades at the nonprofit Community Catalyst working to expand protections for patients with medical debt, said that is why federal action is needed to rein in hospitals and other medical providers everywhere.

The researchers who worked on this story were KHN writer Megan Kalata and Dr. Margaret Ferguson, Anna Back, and Amber Cole, who were students at the Milken Institute School of Public Health at George Washington University.