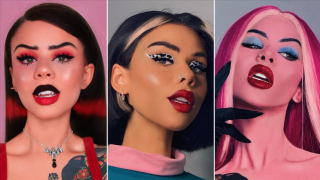 Welcome to Lace Frontier, a column about the world of wigs, the players in it, and how wig culture is evolving. This month, we speak to Snitchery on how her personal hair journey and her love of cosplay have influenced her relationship with wigs.

Cosplay fans know that the key to creating a good look requires the right outfit, good makeup, and the perfect wig to match. No one knows this better than Snitchery, née Eleanor Barnes, whose 1.1 million followers on Instagram and 611K on YouTube log on to see the anime, comic book, and cartoon-inspired looks she's created. Wonder Woman, Harley Quinn, and even Cardi B have all gotten the Snitchery treatment, re-imagined with stunning accuracy by the 23-year-old influencer.

Creating so many different characters means Barnes has to have a lot of wigs — and some styling skills to boot. But whether she's buying a unit that perfectly matches the character she's trying to emulate or she has to snip it into submission, her wig collection is vast and unlike the kinds we see from many wig enthusiasts. Yes, the lady is a fan of a lace-front made from human hair, but in her world, synthetic units rule. 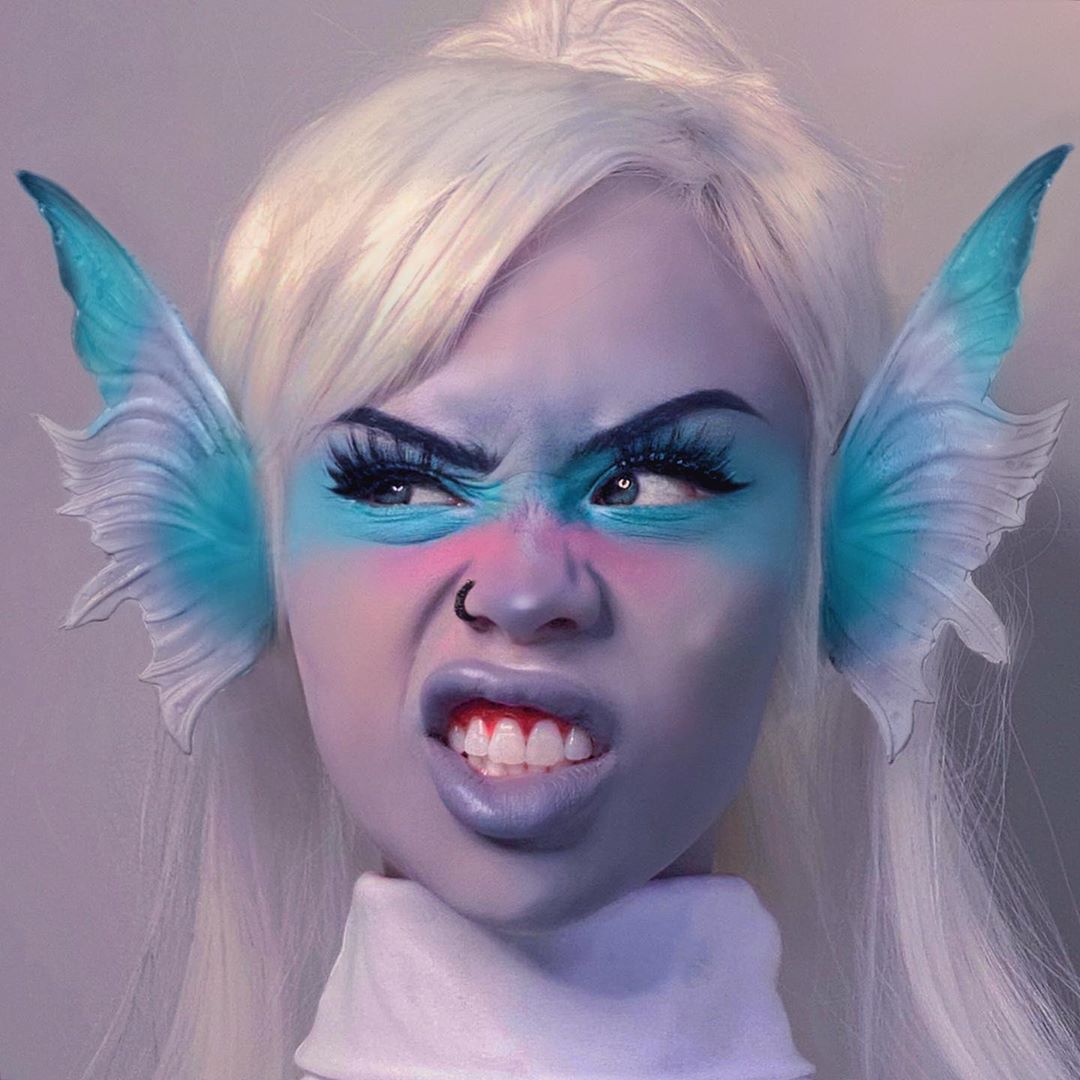 We chatted with Snitchery about her wig collection, how she cares for it, and what she does with all those units when she's done with them.

ALLURE: I watched your hair journey video and you mentioned that you initially started wearing wigs to cover up your damage and thinning. When did it become more about you liking the look of wigs as opposed to hiding your hair?

SNITCHERY: When I started cosplaying — that would be around the time when I made the switch into looking at wigs as a creative expression instead of just a means for me not to have to deal with my hair in the morning. [I started wearing wigs for personal use] around 2015, and pretty much right away I was wearing them on Instagram, too. But it would just be whatever wig I had at the time that I was wearing around my college campus. Essentially, I was considering it my hair.

Around 2018, I started wearing wigs for cosplay. I had a little bit more money at that point than I did in college, and it was a great way to mix things up on Instagram. Obviously, with the cosplay, it's essential. When I started cosplaying, I was not super comfortable showing my body online, so I was doing what I called "beauty-based cosplay," which was shoulder-up, very makeup and predominantly wig focused. Wigs became really important in my job.

ALLURE: How did you initially get into cosplay?

SNITCHERY: I've loved cosplayers for the longest time. I've been really involved in their culture since I was 13, maybe. I would see [the ones] who would go to conventions when I was a young teenager.  I didn't know how to sew, so it was always super intimidating to me, these people who would do amazing costumes and wigs.

I slowly started dipping my toe into it through [dressing up for] Halloween, so that if it didn't work out or if I wasn't very good, I could just say, "These are Halloween costumes, no big deal." But people loved [my looks] and I ended up loving doing it. So I'm happy that the dream of my little 13-year-old self was realized on Instagram.

SNITCHERY: I would say probably my Hex Girl look — that has a pretty special place in my heart. I had wanted to do that one for a really long time. In terms of hair and wigs, I recently did the Cardi B "WAP" look with the interlocking hair chain. That was so fun and actually really difficult. It was pretty rewarding to get it done. I made it with my mom, and that's probably the most maybe impressive hair thing I've done in cosplay.

ALLURE: Does your mom typically help you with your wiggatry?

SNITCHERY: She does sometimes. She doesn't know much about them. She knows less than I do, but she's my little crafting buddy for cosplay and she is actually pretty good with hair, so she's been a huge help. 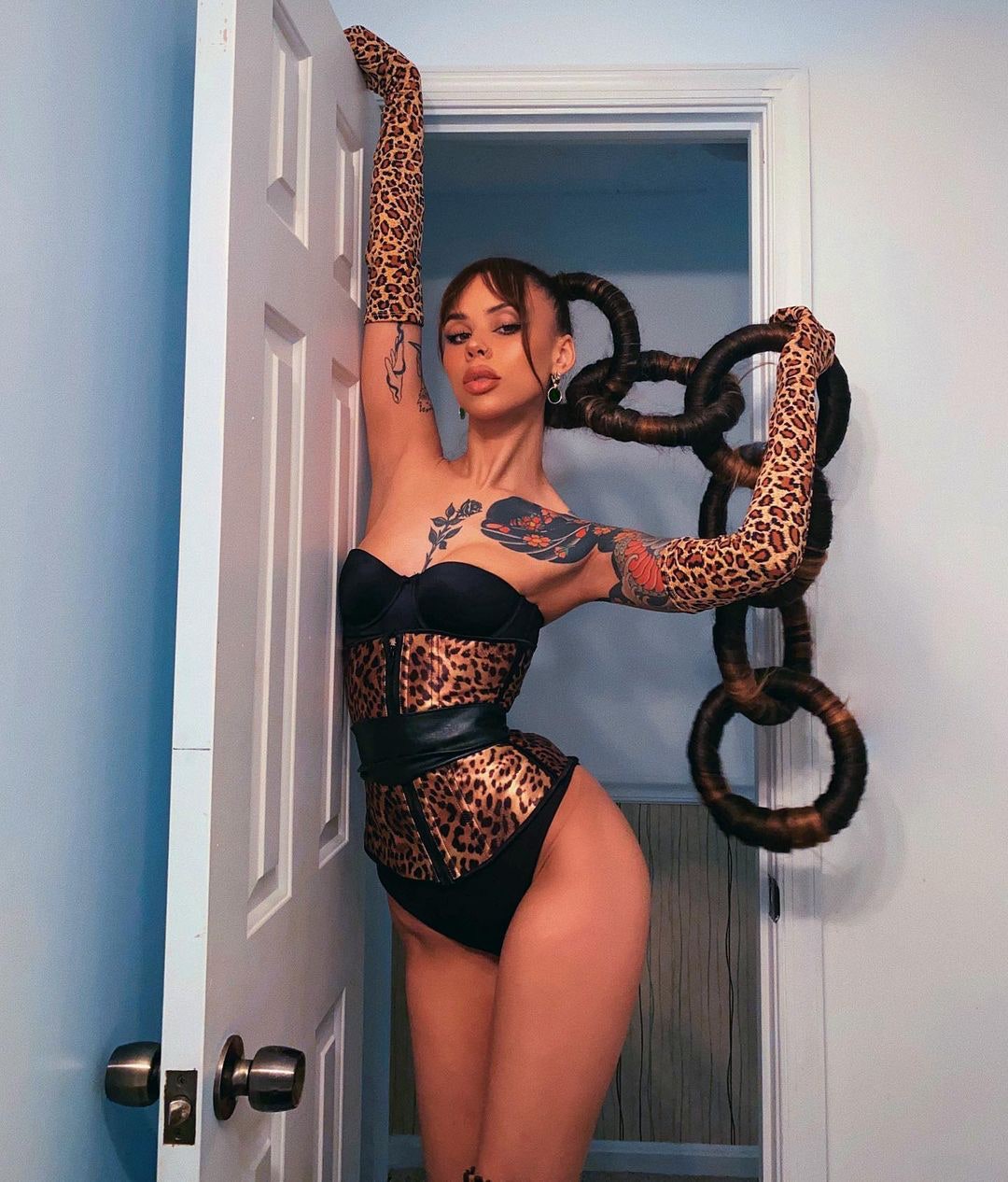 ALLURE: When you're doing these characters, do you find that you often have to modify the wigs to get the look that you want? Or is it not terribly difficult to find something to match a character?

SNITCHERY: I'd say it's a mixed bag. There are definitely characters who obviously have simpler hairstyles where I can just buy a wig and pretty much slap it on. But for the most part, I use synthetic wigs for cosplay, which typically don't come ready to wear. I always have to at least spray them down with dry shampoo. Usually, I have to use a little bit of hair spray and backcombing to get some volume because they're typically pretty thin. Sometimes I add in braiding hair to get that volume, too.

ALLURE: Are there any particular wig styles you prefer working with?

SNITCHERY: I would say for everyday wear especially, I do tend to prefer full-lace wigs. Purely for the parting space alone and even for cosplay — a lot of the styles require that I'll do pigtails. Especially with machine-made wigs, I think it's really difficult without that lace to get anything that looks realistic. Obviously, full-lace wigs are the most expensive. So I typically save those for daily wear, though I think my best cosplay wigs have also been full lace.

ALLURE: I know you give away some of your wigs away when you're done using them.

SNITCHERY: Yeah, I've given some away to my friends — especially right now. For the most part with my wigs, I wear them into the ground. Like, I will wear them to death. By and large, by the time I'm done with a wig, I don't think anybody would want them. I'm lucky in that I've been able to collect about as many colors as humanly possible. 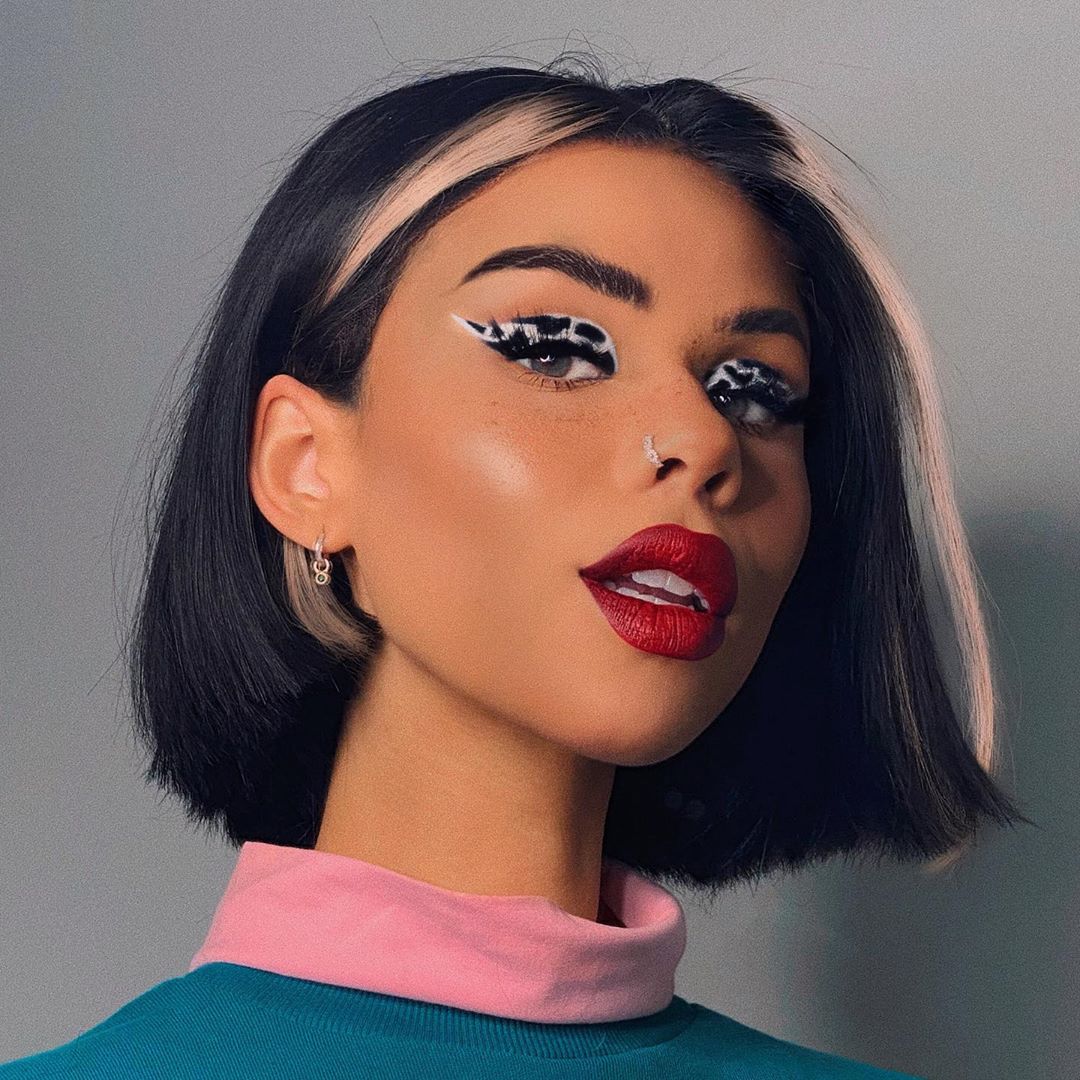 For cosplay, I'm able to reuse them and cut them into different styles. And usually, I can get three or four characters out of a wig. And by the time it's seen those three characters, it's kind of dead. Typically, by the time I'm through with the wig, with all my crafting, I can just [put that one on pause], but I have given them to friends before.

ALLURE: The wigs that you do keep, do you ever name them?

SNITCHERY: I actually don't name my wigs. I think it's honestly because I have too many. I have friends who also wear wigs and a lot of them do name them. It's almost like clothes — you can have 200 fast fashion things or you can have a capsule closet of a couple of really nice pieces. They have like a couple of really nice wigs that they bond with. And I have like literally 200 rat's nests that I'm digging through. So no, I don't name them just because I think I might have too many to do so. 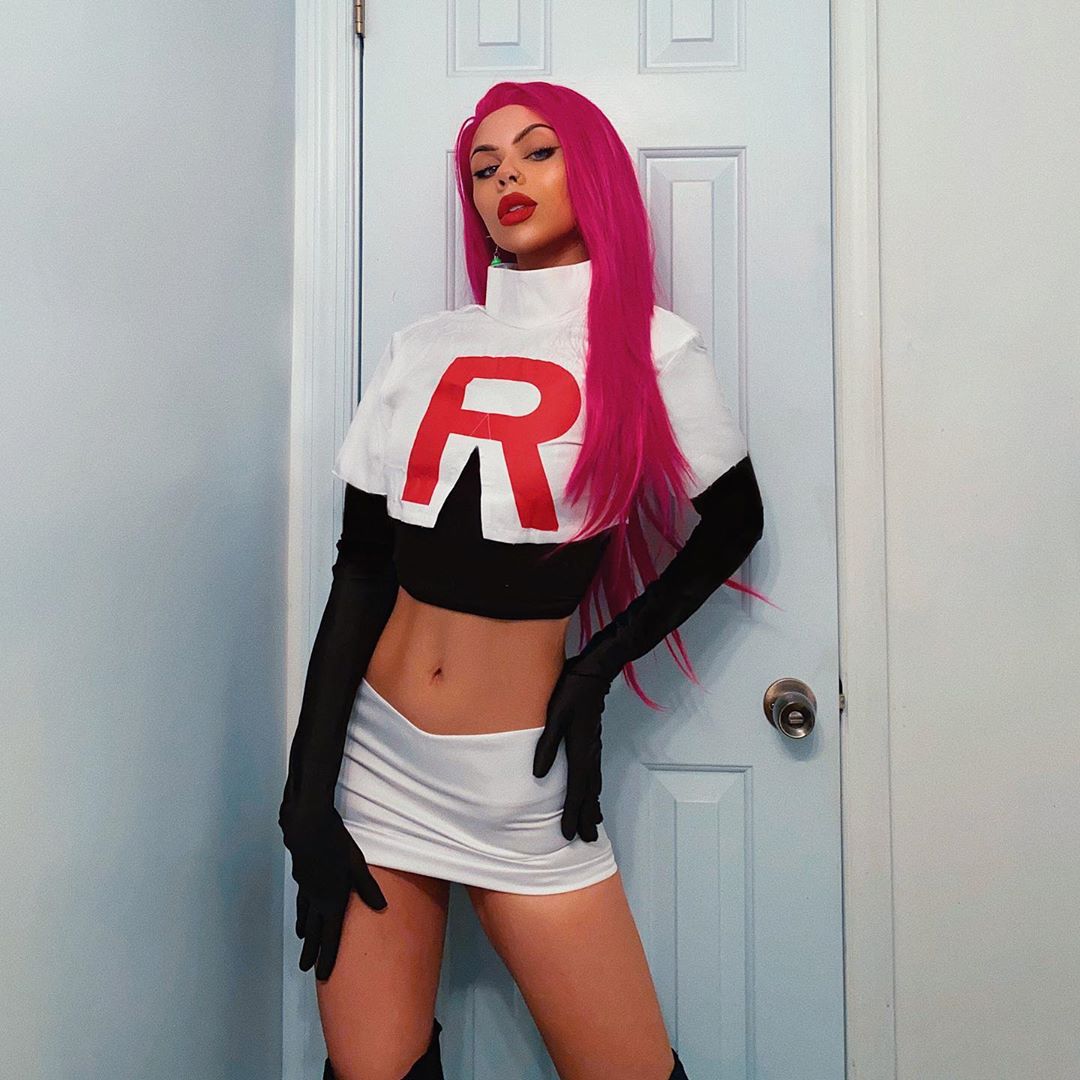 ALLURE: Fair enough! But even with the large amounts of various wigs — do you have a favorite unit?

SNITCHERY: My favorite unit of all time was a long, pastel pink, full-lace human hair wig from, I think, Mood Hair, Inc. That was the only one that I wore for five months straight. [I ran it] into the ground. I think I got it in 2018.

ALLURE: How do you like to store your wigs?

SNITCHERY: Listen, it's a work in progress. I should store them on wig heads. And literally, since 2016, when I really started getting into the wig game, I'd thought that. But for now, because I have so many, I really just throw them all in a bin.

They're all just kind of piled up in there. For the ones that I know I'll reuse for other characters or the newer ones, I keep them in little bags in the bin. But listen, when I move out to Los Angeles, a wig room is the goal, but for now, they're sitting in storage essentially.

ALLURE: A wig room is a must. I bet you'd be so excited to decorate that.

SNITCHERY: Right? Every time I see one I'm like, "Oh my God." And then I look over at my bin of just lumpy, rainbow knotted hair and am like… "someday, someday."

ALLURE: You will get there. Where do you typically find your inspiration when you're deciding on a look?

SNITCHERY: I do watch a lot of anime. It's usually just from whatever show I'm currently watching — I'll end up finding somebody who not even necessarily is my favorite character, but just has an interesting character design. Twitter is also a great resource, especially for a lot of the looks I do, which are very nostalgia-based. 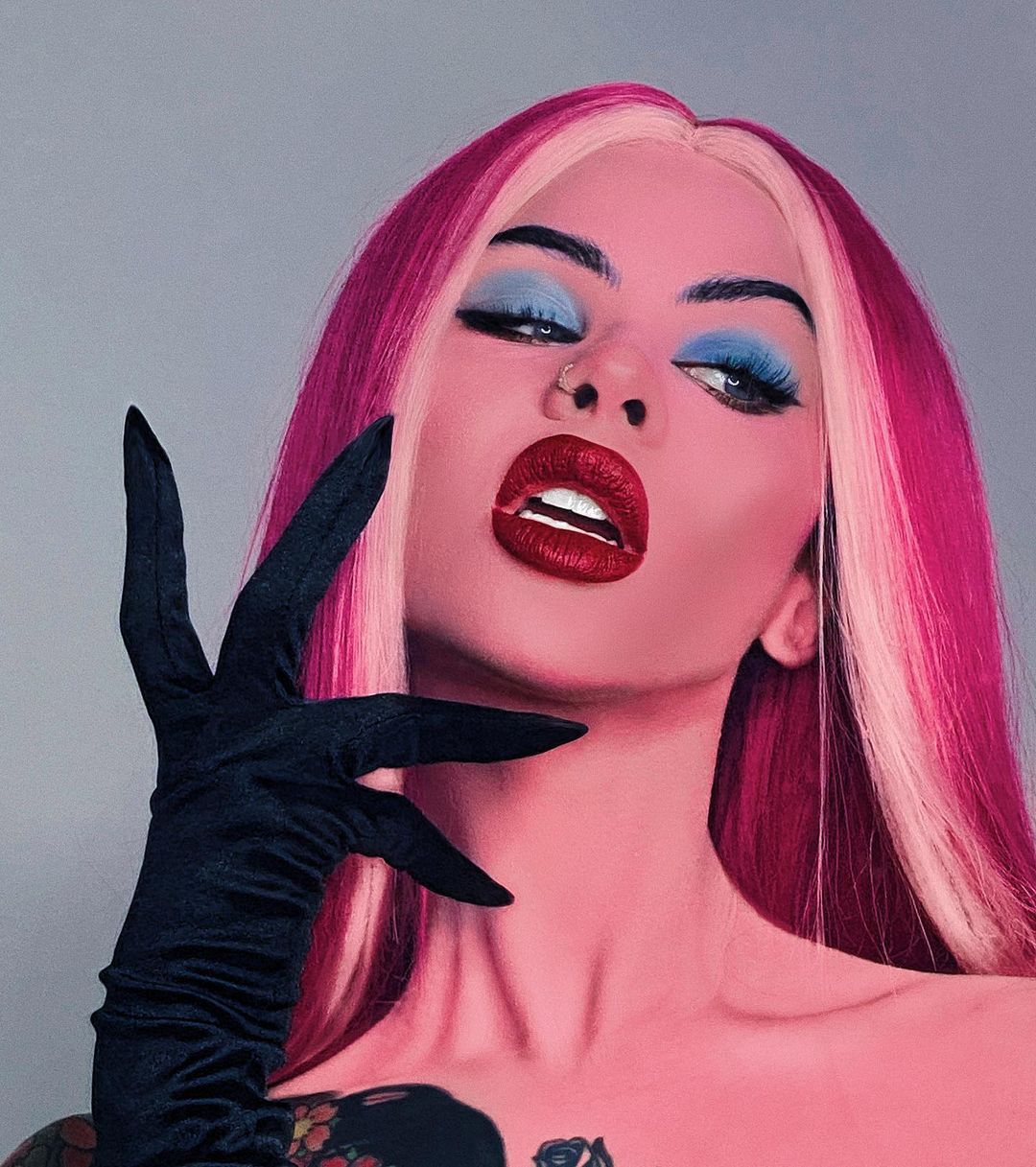 A lot of times, I'll see characters from old shows retweeted onto my timeline, or my followers will give me great ideas of what to do. I'm about to do a character from Foster's Home for Imaginary Friends, which is a show I have not thought about since I was maybe seven. My followers have been great in giving me inspiration for stuff like that. I think especially this year, people are so hungry for nostalgia. It's been really fun to dip back into a lot of those Cartoon Network and Nickelodeon shows.

ALLURE: What would you say was your priciest unit?

SNITCHERY: I honestly don't typically spend too much on wigs. I know there are units that can run you thousands of dollars. But I don't take good enough care of them to warrant spending that much money. So I think the most I've probably spent on a wig was maybe $400, which certainly is a lot of money. And I typically will spend around $40 for a cosplay wig, but really nice everyday wigs, usually they're around $300, $400.

SNITCHERY: I always buy on the clearance. I am so cheap when it comes to wigs. And for some reason, I've just never had any inclination to work with a wig brand or potentially get [wigs] for free or anything like that. I sort of kept them out of my sponsorship life. I'm not sure why — I would just prefer to buy them myself.  I'm certainly not about to drop a couple racks on a wig when I know it's going to be sitting on my bedroom floor in three days.