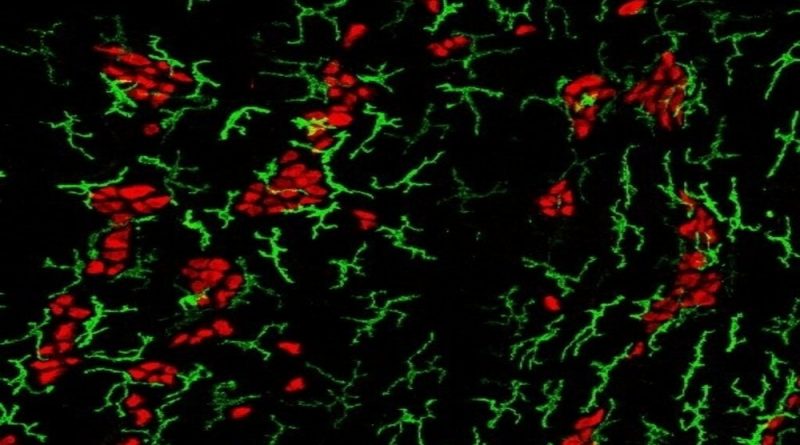 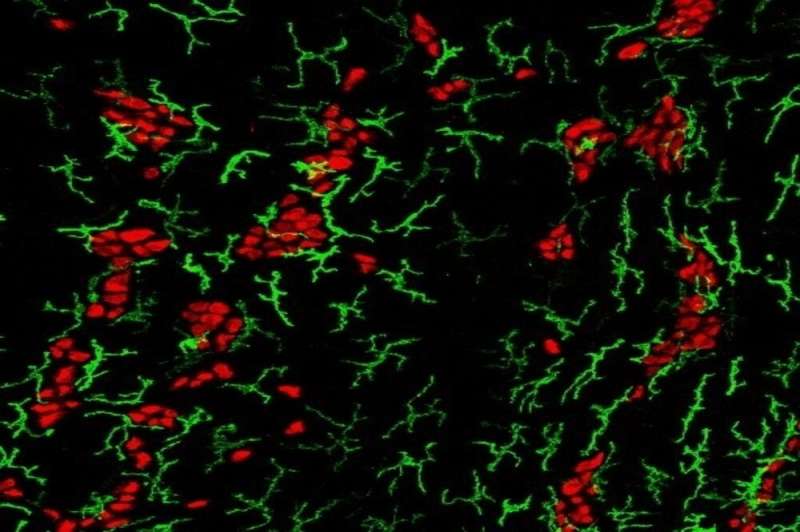 A simple stomach bug could do a lot of damage. There are 100 million neurons scattered along the gastrointestinal tract—directly in the line of fire—that can be stamped out by gut infections, potentially leading to long-term GI disease.

But there may be an upside to enteric infection. A new study finds that mice infected with bacteria or parasites develop a unique form of tolerance quite unlike the textbook immune response. The research, published in Cell, describes how gut macrophages respond to prior insult by shielding enteric neurons, preventing them from dying off when future pathogens strike. These findings may ultimately have clinical implications for conditions such as irritable bowel syndrome, which have been linked to the runaway death of intestinal neurons.

“We’re describing a sort of innate memory that persists after the primary infection is gone,” says Rockefeller’s Daniel Mucida. “This tolerance does not exist to kill future pathogens, but to deal with the damage that infection causes—preserving the number of neurons in the intestine.”

Neuronal cause of death

Known as the body’s “second brain,” the enteric nervous system is houses the largest depot of neurons and glia outside of the brain itself. The GI tract’s own nervous system exists more or less autonomously, without significant input from the brain. It controls the movement of nutrients and waste by fiat, coordinating local fluid exchange and blood flow with authority not seen anywhere else in the peripheral nervous system.

If enough of those neurons die, the GI tract spirals out of control.

Mucida and colleagues reported last year that gut infections in mice can kill the rodents’ enteric neurons, with disastrous consequences for gut motility. At the time, the researchers noted that the symptoms of IBS closely mirror what one might expect to see when enteric neurons die en masse—raising the possibility that otherwise minor gut infections might be decimating enteric neurons in some people more than others, leading to constipation and other unexplained GI conditions.

The researchers wondered whether the body has some mechanism of preventing neuronal loss following infection. In previous work, the lab had indeed demonstrated that macrophages in the gut produce specialized molecules that prevent neurons from dying in response to stress.

A hypothesis began to take shape. “We knew that enteric infections cause neuronal loss, and we knew that macrophages prevent neuronal cell death,” Mucida says. “We wondered whether we were really looking at a single pathway. Does a prior infection activate these macrophages to protect the neurons in future infections?”

Postdoctoral fellow Tomasz Ahrends and additional lab members first infected mice with a non-lethal strain of Salmonella, a standard bacterial source of food poisoning. The mice cleared the infection in about a week, losing a number of enteric neurons along the way. They then infected those same mice with another comparable foodborne bacterium. This time, the mice suffered no further loss of enteric neurons, suggesting that the first infection had created a tolerance mechanism that prevented neuronal loss.

The scientists found that common parasitic infections also have a similar impact. “In contrast to pathogenic bacteria, some parasites like helminths have learned to live within us without causing excessive harm to the tissue,” he says. Indeed this family of parasites, which includes flukes, tapeworms, and nematodes, infect in a way that is more subtle than highly hostile bacteria. But they also induce even greater, and more far-reaching, protection.

During a primary bacterial infection, Mucida found, neurons call out to macrophages, which rush to the area and protect its vulnerable cells from future attacks. When a helminth insinuates itself into the gut, however, it is T cells that recruit the macrophages, sending them to even distant parts of the intestine to ensure that the whole gamut of enteric neurons are shielded from future harm.

At the end of the day, through different routes, bacterial and helminth infections were both leading to protection of enteric neurons.

Next, Ahrends repeated the experiments in mice from a pet store. “Animals in the wild have likely had some of these infections already,” he says. “We would expect a pre-set tolerance to neuronal loss.” Indeed, these animals suffered no neuronal loss from any infection. “They had a lot of helminths in general,” Mucida says. “The parasitic infections were doing their jobs, preventing the neuronal losses that we have seen in isolated animals in the lab.”

Mucida is now hoping to determine the precise impact of neuronal loss in the GI tract. “We’ve observed that animals consume more calories without gaining more weight after neuronal loss,” he says. “This may mean that the loss of enteric neurons is also impacting the absorption of nutrients, metabolic and caloric intake.”

There may be more consequences of neuronal loss than we expected,” he adds.

Mucida believes that this research could contribute to a more complete understanding of the underlying causes of IBS and related conditions. “One speculation is that the number of enteric neurons throughout your life is set by early childhood infections, which prevent you from losing neurons after every subsequent infection,” Mucida explains.