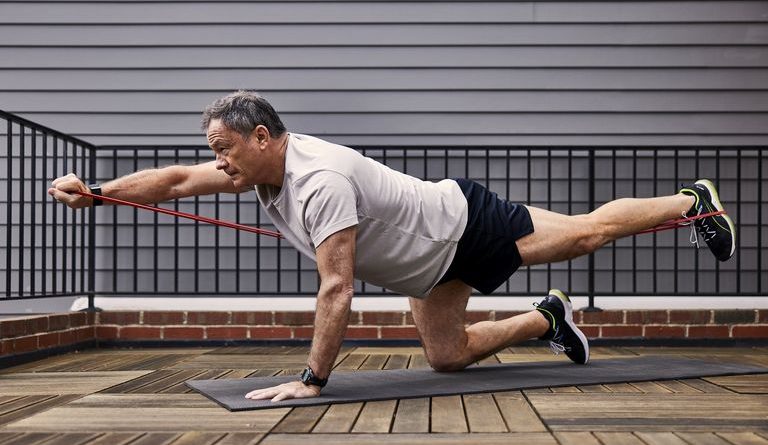 Michael López-Alegría has spent 257 days outside the Earth’s atmosphere and performed 10 space walks totaling 67 hours and 40 minutes, more time than any other American. But right now, on the backyard deck of his Washington, D.C. home, he’s found a new frontier. He’s on all fours, one end of a resistance band wrapped around his left foot, the other held in his right hand. He tightens his abs, then extends arm and leg. He’s doing a banded bird dog, an exercise that pushes the bounds of his core strength—and one that may help him reach new heights during his next trip into space.

That trip comes in 2022, when López-Alegría, 63 years young, blasts off to the International Space Station (ISS). He’ll command the ten-day Axiom Space Ax-1 mission, the first private spaceflight to the ISS, which will be launched by Elon Musk’s SpaceX. It’s a giant leap for mankind (and space tourism), and it starts with López-Alegría’s small wellness step. The U.S. Astronaut Hall of Fame inductee says he has never loved “working out for a workout’s sake.” But he knows his body needs it.

This isn’t about biceps or abs, though. “You don’t need Olympic-athlete fitness to be an astronaut,” he says. “You just need to be healthy.” Still, he has to pass a battery of medical tests, and, 14 years after his last trip into space, he worries that he won’t be able to. So he started working with trainer Emiliano Ventura, who designs workouts for F1 race-car drivers.“Your cells break down, your body breaks down,” López-Alegría says. “Now it’s like ‘Geez, am I gonna pass this thing?’” 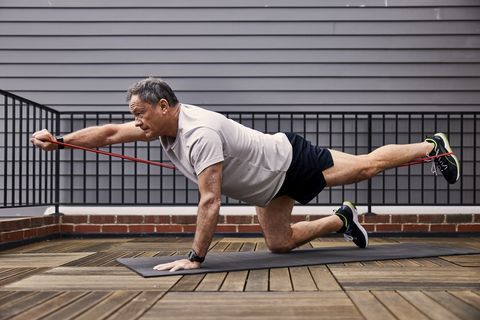 When he left NASA in 2012 after four spaceflights, López-Alegría thought he was done star-trekking. After years consulting for various space-industry firms, he joined Axiom Space, a company that has designs on space vacations and manufacturing, as an exec. He quickly discovered a problem: Few customers wanted to join a mission without someone who had been in space before. “We kind of looked around the room,” he says, ” and I was a guy who was still able to fly and I had been there and done that.

So to get in mission-ready shape, he embraced workouts like today’s session, a six-exercise, bands-only circuit. He does 20 reps of bird dogs on each side, then sits on his deck with his legs straight, wraps the band around his feet, and grasps its ends. He starts doing 20 reps of rows, strengthening mid-back, biceps, and forearms. Arm and grip strength and stamina serve astronauts during space walks. “You’re in a pressurized suit, which wants to maintain its [shape],” he says. “Think of a surgical glove that’s blown up and inflated. So in order to bend the fingers of the glove, you have to exert some force.” Things get even more challenging if he has to grab a wrench or other tool. “Grip strength is important,” he says, “and [so are the] lower arms, upper arms, shoulders, chest.”

That’s all unnecessary inside the station.“It’s super easy to get around,” López-Alegría says. “You don’t stand up, even.” To offset that, he and his team will train daily on the ISS, splitting time between cardio and resistance-band work. Unlike dumbbells, bands still provide resistance in space. 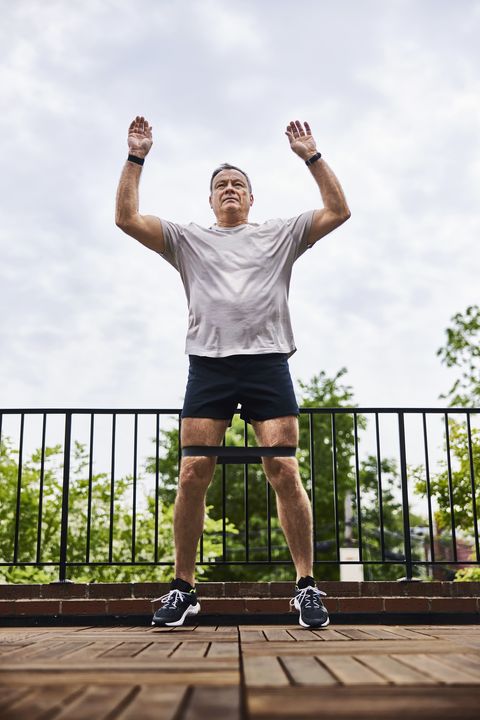 This training makes it easier for astronauts when they return to earth, readying them to face the power of gravity again.

But the training does more than that. López-Alegría and his crew will be aboard the ISS for about eight days, working through a packed schedule that includes a series of experiments, and that can lead to plenty of stress. He expects some crew members will meditate to stay calm. Others will stave off anxiety by attacking their workouts. “As you know,” he says, “some people crave [exercise] and they have to have it.”

The man leading the mission doesn’t crave it, but every single day he’s in space, he’ll train, too. “It’s all about preparing yourself for when you come back [to earth],” he says. That process has already started.

Forge upper-body strength with this 3-round circuit built from moves López-Alegría does often. 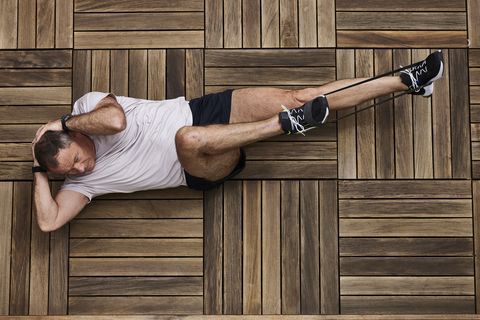 Stand holding a resistance band in front of you, arms straight. Squeeze your shoulder blades and pull the band apart, keeping your arms straight. That’s 1 rep; do 20.

Sit on the floor, legs straight, a band wrapped around your feet, hands holding its ends. Squeeze your shoulder blades and row your elbows back to your torso. That’s 1 rep; do 15.

Hold a looped resistance band in both hands, wrapped around your back. Get in pushup position and tighten your core and glutes. Do 15 pushups.

This story originally appears in the September 2021 issue of Men’s Health.