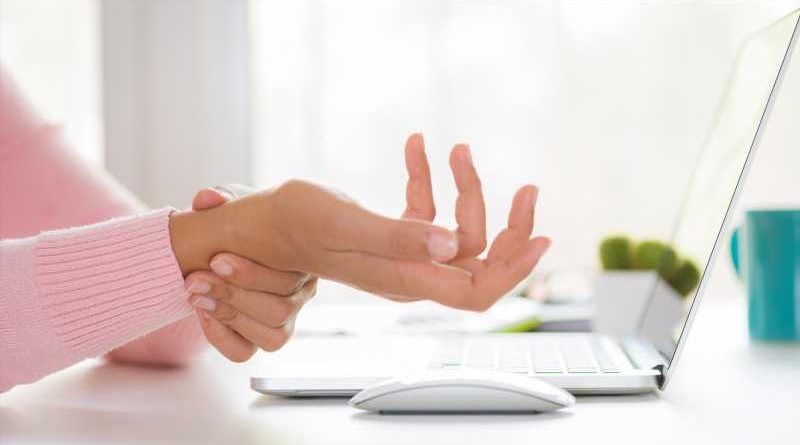 Has this ever happened to you — you’re sitting at your desk, deep into work at your computer typing away, and you notice that your hands are tingling and feel like they’re falling asleep. You give your hands a shake and keep going, but should it be cause for concern? It could be a signal for the onset of carpal tunnel syndrome (via MedlinePlus).

In carpal tunnel syndrome, the median nerve that’s in the middle of your hand gets pinched as it passes through the carpal tunnel in your wrist causing the tingling, numbing feeling in your fingers, which can also escalate into sharper pain (via Southwest Health). The position that your hands are in while you type can exacerbate the syndrome’s symptoms (via the Cleveland Clinic).

One scientific study published in the Journal of Orthopaedic Research found that spending more than 20 hours per week on a keyboard could cause or exacerbate carpal tunnel syndrome, and some solutions to the problem the researchers found — other than cutting back on one’s workload — were to “decreasing the slope of the keyboard, decreasing the keyboard thickness, using a split keyboard, using a forearm support surface, or raising the keyboard height relative to the chair.”

Other factors beyond typing can come into play. According to OrthoInfo for the American Academy of Orthopaedic Surgeons, heredity, pregnancy, repetitive motion (where your wrist is extended over a long period of time), and health conditions like diabetes, thyroid imbalance, and rheumatoid arthritis can also play a role in getting carpal tunnel syndrome. It’s also more likely to occur in women (via the Cleveland Clinic).

Carpal tunnel syndrome often starts out gradually, and it’s easier to address in the earlier stages. Just moving and shaking your hands can be a temporary reprieve (via Southwest Health), but if you just go back to doing the same thing in the same way, the problem will probably come back. Non-surgical, early stage fixes could include adjusting your work setup or wearing a splint; if you let it progress, it could end up requiring cortisone injections and even surgery (via the Cleveland Clinic). So if you’re starting to notice it more often, it could be worth bringing up with your doctor.