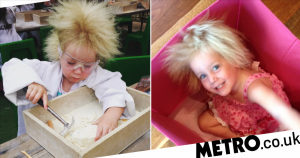 Shilah Madison Calvert-Yin has had fluffy hair since she was a baby.

The ten-year-old from Melbourne, Australia, has uncombable hair syndrome – a condition where her hair shafts are heart-shaped and missing a protein that makes the strands sit straight.

When she was younger, Shilah cut off her own hair out of frustration – but now embraces her unique ‘do.

The youngster often receives comments for her look but she has learned to look the other way.

Shilah said: ‘I get teased a lot and called “fluffhead” at school – it’s not nice.

‘I personally like my hair now but at the same time I hate it – especially when there’s wind!

The condition means Shilah’s hair stands away from her head and looks frizzy.

It develops in childhood and affected children have light-colored hair with a silvery sheen. The condition also causes weakened enamel, porous bones, and brittle fingernails

Mum Celeste, a teacher, knew her daughter was different when Shilah was just three months old.

She said: ‘Her brown baby hair had fallen out as it should but this weird fuzz started to come through and grow straight up.

‘It didn’t seem to calm or settle, but I didn’t really think anything of it until people started to make comments.’

Some quip that it looks like she stuck her finger in a power socket, while mean kids used to pull her hair at school.

In 2014, Shilah took part in a Jurassic Park-themed excavation activity for kids at their local shopping mall, and donned a lab coat, earning the nickname Doc Brown.

As Shilah got older her hair became dry and fragile and would get matted overnight.

Aged four, Shilah became fed up with her hair not all pulling back into a ponytail and cut off the shorter parts that didn’t reach.

It took over two years for Shilah’s hair to grow back, and she wore a headscarf to hide it. Celeste is now considering taking her daughter to a salon that specialises in afro hair.

Shilah wasn’t diagnosed with uncombable hair syndrome until she was seven years old, when it was spotted by a dentist.

Celeste said: ‘Her dentist was concerned about how weak her teeth were and the anaesthetist who was scheduled with Shilah was the one who noticed her hair and told us about uncombable hair syndrome.’

The doctor had studied genetics and abnormalities and knew all about the condition but had never met a child with it.

‘I was shocked, teary and excited at the same time- finally there was an answer to all those years of questions!’ said Celeste.

‘You panic when you hear doctors talk about cell mutations but fortunately, Shilah has only broken one bone in her life and now we are careful about her bones and teeth.

‘The doctor told us she had never heard about anyone in Australia with it and never expected to meet a child like Shilah – she’s one-in-a-million!’

Do you have a story you want to share?