The River Ganges is filled with antibiotic resistant bacteria even in stretches which are high in the mountains away from India’s cities, scientists have found.

The 1,560-mile (2,510km) long river flows through Bangladesh and the north of India from its beginnings in the Himalayas.

It is known to be one of the most polluted rivers in the world, but researchers found evidence of harmful bacteria even close to the water’s source, where it should be clean.

And they say people making pilgrimages and travelling as tourists to a sacred area in the mountains – and using toilets and bathing in the river there – is to blame.

Tests of water near the town of Gangotri showed huge spikes in the numbers of bacteria which had evolved to be too strong to be killed with antibiotics. 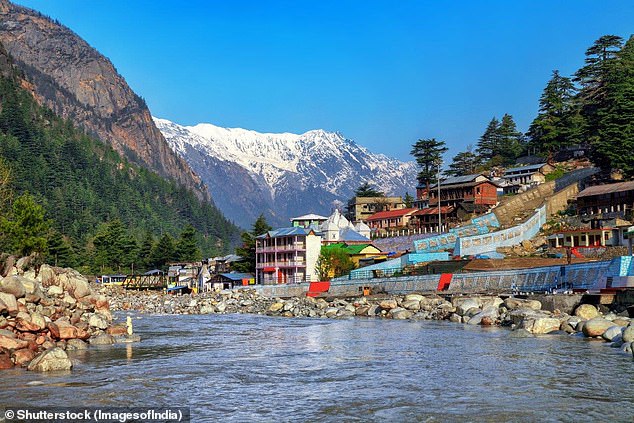 The town of Gangotri in the Himalayas is close to the source of the Ganges River and is a hotspot for tourists and pilgrims because it is a sacred Hindu site. It has a year-round population of around 100,000 but there are some 500,000 annual visitors during May and June 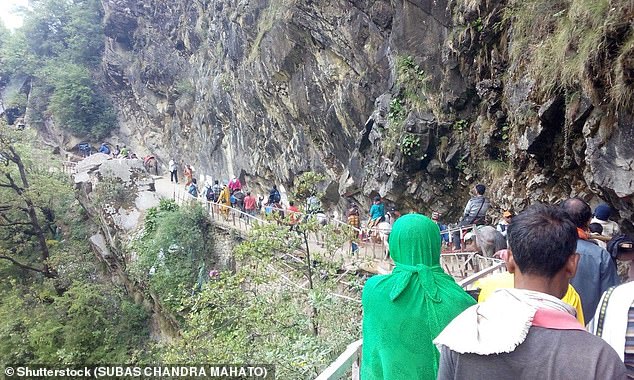 Gangotri is a religious destination for Hindu pilgrims – there are nearly a billion Hindus in the country – and also a popular tourist spot, the New York Times reports.

It is sacred and so named because it is said to be where the goddess Ganga turned herself into a river – the Ganges – to dissolve the sins of ancient noblemen.

But, with a population of around 100,000 in the down-season, the area only has good enough public sewage systems to handle around 78,000.

Already overloaded, it spells disaster when the numbers of people staying in the area surges to 500,000 in May and June.

Local officials said portable toilets are put in place but if it rains heavily sewage is quick to flow into the river.

Antibiotic resistant bacteria is now common in people because they take medications and eat meat treated with similar drugs.

Resistance develops when bacteria are exposed to an amount of an antibiotic too small to kill it, allowing it to evolve to learn how to resist it next time.

And the DNA which cause the resistance – which is what researchers are finding in the River Ganges – can survive the intestines to be distributed through urine and faeces.

Antibiotics have been doled out unnecessarily by GPs and hospital staff for decades, fueling once harmless bacteria to become superbugs.

The World Health Organization (WHO) has previously warned if nothing is done the world is heading for a ‘post-antibiotic’ era.

It claimed common infections, such as chlamydia, will become killers without immediate solutions to the growing crisis.

Bacteria can become drug resistant when people take incorrect doses of antibiotics or if they are given out unnecessarily.

Former chief medical officer Dame Sally Davies claimed in 2016 that the threat of antibiotic resistance is as severe as terrorism.

Figures estimate that superbugs will kill 10 million people each year by 2050, with patients succumbing to once harmless bugs.

Around 700,000 people already die yearly due to drug-resistant infections including tuberculosis (TB), HIV and malaria across the world.

Concerns have repeatedly been raised that medicine will be taken back to the ‘dark ages’ if antibiotics are rendered ineffective in the coming years.

In addition to existing drugs becoming less effective, there have only been one or two new antibiotics developed in the last 30 years.

In September, the WHO warned antibiotics are ‘running out’ as a report found a ‘serious lack’ of new drugs in the development pipeline.

Without antibiotics, C-sections, cancer treatments and hip replacements will become incredibly ‘risky’, it was said at the time.

The World Health Organization says resistant bacteria is one of the world’s biggest health threats and it ranks alongside major diseases such as cancer and dementia.

Also known as ‘superbugs’, the bacteria cause infections which were once easily treatable but may now need multiple courses of medicine or super-strength drugs.

Superbugs already kill around 700,000 people per year and this death toll is expected to rise to as high as 10million by 2050.

Scientists at the Indian Institute of Technology have been regularly testing the water in the Ganges and have found ‘astronomically high’ levels of resistant bugs.

And the only possible source of them is humans who travel into the hills and use the toilet there and bathe in the waters.

Dr Shaikh Ziauddin Ahammad told the NYT: ‘We are not telling people to stop rituals they’ve done for thousands of years.

‘But the government should do more to control the pollution and protect them.’

Tests by Dr Ahammad and his colleagues revealed that levels of a bacteria containing an antibiotic-resistant gene named NDM-1 were 20 times higher downstream of Gangotri than they were upstream of it.

This was less than 100miles from the river’s source, where water should have been pure.

But telling local people – especially religious pilgrims – to stop bathing in the water or visiting sacred areas, is unlikely to be welcomed.

A food vendor working in Gangotri, Jairam Bhai, told the New York Times: ‘Ganga is our mother — drinking her water is our fate.’

Another visitor added: ‘We don’t follow bacteria, we don’t think about it.’