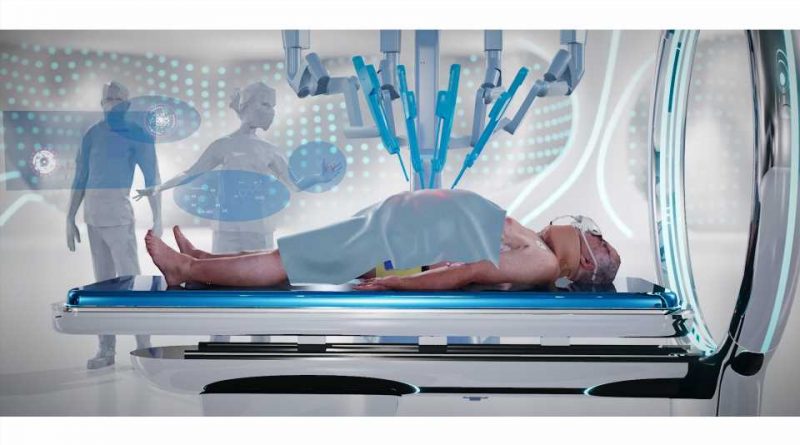 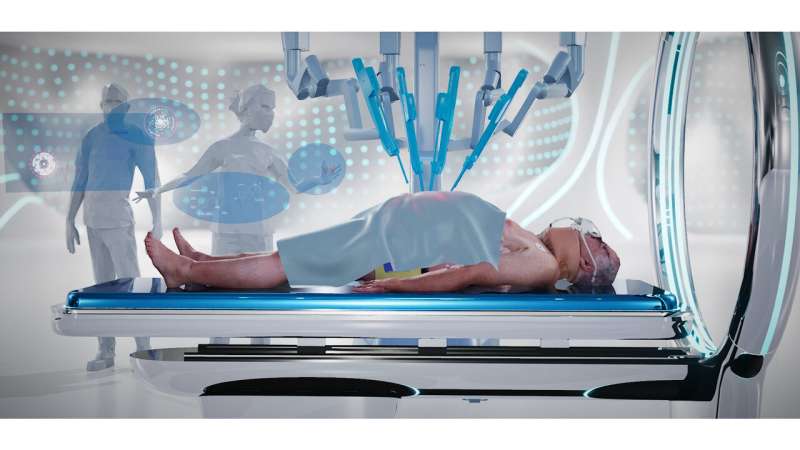 It’s 2032 and an elderly man lies critically injured on a remote road in Goondiwindi following a car accident. His life is in the balance, but data visualization, remote robotics, bio-fabrication and virtual care will combine to give him the best possible chance of survival.

The story is told through a new film made by QUT’s School of Creative Practice using ground-breaking Disney-inspired virtual production techniques to visualize the future of trauma care.

Commissioned by the Jamieson Trauma Institute at Royal Brisbane and Women’s Hospital, The Future Journey of a Trauma Patient is QUT’s first major virtual production release, integrating an actor into fully digital virtual environments to tell the story.

Directed by Sorin Oancea and Joe Carter, lecturers in film and animation at QUT’s School of Creative Practice, the project brought together a team of researchers, animation and film students, and acting students who portrayed the medical staff through motion capture. Professional actor Errol R J Morrison was employed to play the trauma patient.

“QUT is one of only a handful of universities in the world with a virtual production pipeline which includes full body 3-D scanning technology, LED Wall Virtual Production, and Motion Capture systems to create high quality outcomes in a cost-effective manner,” Mr Carter said.

“Creating “The Future Journey of a Trauma Patient’ gave us the opportunity to test and develop our techniques in this area. The technical inspiration comes from Disney’s space western “The Mandalorian,” which has brought virtual production to the mainstream, shooting almost all scenes using motion-tracked camera against virtual backgrounds which move in real-time to match the camera moves.”

Mr Oancea added that virtual production methods were fast changing the way we tell stories and make films, with hybrid reality cinematography blurring the lines between live action and animation.

“We decided our CG production design was going to be based on a minimalist, highly polished sci-fi look and have the feel of a tribute to such classics as Kubrick’s ‘2001: A Space Odyssey,'” Mr Oancea said.

“This scope of work just in terms of 3-D modeling for the virtual sets and other assets, let alone animation, lighting, and effects would have been prohibitively expensive not long ago.

“Now though, photogrammetry and ‘virtual scouting’ of customisable environments is largely replacing traditional production approaches. Along with using motion capture for acting performances, these methods brought our production to a higher standard than otherwise possible while maintaining the impactful look and feel we were after.”

The finished product is an engaging blend of real life and animation.

In a nod to smart cars of the not-to-distant future, the driver’s ute calls 000 after he rolls it on a lonely stretch of road. The drama then details how scans at Goondiwindi Hospital are viewed by a trauma team in Brisbane who virtually assist the local doctors to stabilize the patient. Scans are also sent to a biofabrication team in Brisbane to start work on printing bone implants for his shattered leg. “Nurse navigators,” meanwhile, are in communication with his family on “John’s’ progress.

“The Jamieson Trauma Institute researchers, led by QUT Adjunct Professor Michael Schuetz, were looking at how to capture live foreground action (the trauma patient) in an animated environment which changes as the trauma patient undergoes their journey through the health care system,” said Mr Carter.

“The film will be used by the Institute to present its vision for the future of trauma care and will be made freely available on its website to healthcare professionals (doctors, nurses, trauma rehab teams, medical facility designers, medical students and others) in Queensland, across Australia and internationally.

“From our point of view, it has also served to demonstrate the growing capacity of QUT to utilize virtual production techniques as a way to produce visually and aurally striking content in a unique and cost-effective way.

“The end result is a film that enriches communication, increases focus, empathy and impact.”

Michael Handy, assistant nursing director of trauma and orthopedics at Royal Brisbane Hospital and a JTI consultant said the film would play a vital role in summarizing current practices and those expected to be the norm within the next 10 years.