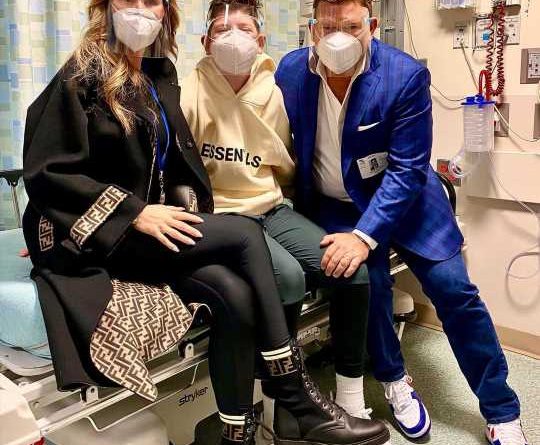 The Fox News anchor, 50, shared a tribute to his 13-year-old son on Thursday, as Paul — who was born with five congenital heart defects — prepared to go into surgery at Children’s National Hospital in Washington, D.C.

“Our warrior Paul, 13, heading in for his 4th open heart surgery ❤️ at @childrensnational,” he wrote on social media, alongside a photograph of himself, wife Amy and their son — who all wore protective face masks and shields — at the hospital.

“Thank you for all the prayers 🙏& good wishes,” he added.

Previously opening up about Paul's health battle, Baier said that he and his wife experienced the full gamut of emotions after his birth.

"It was the highest of highs – first-born child, son," he told USA Today in October. "I had images of a Masters champion, Super Bowl quarterback and we were on Cloud 9, and then it was literally the lowest of lows."

“Blood was flowing the wrong way, there were two holes in Paul’s walnut-sized heart, and he had three other congenital defects,” he explained on the Today show back in 2014. “If Paul didn’t have complex surgery to restructure his heart, he wouldn’t make it.”

Since undergoing his first open-heart surgery just days after his birth, Paul has continued to battle health issues, and he recently had his 10th angioplasty.

"There have been times at 2 in the morning, where he’s turned to me in the hospital bed and said, 'Why do the other kids in my class not have to do this?'" the Fox News host told USA Today. "I answer, because God has a plan for you, and you’re passing with flying colors."

He went on to share that the family hopes this latest surgery will be Paul's last.

Although Paul will have to undergo weeks of recovery following the procedure, Baier said that his son is already looking forward to getting back into the swing of his normal routine, which includes playing golf and basketball.

"It's just a big big deal – eight-plus hour surgery and probably seven to 10 days in the hospital, six weeks recovery. But he's a warrior, and we feel very fortunate to be at Children's National,” he told USA Today. "It’s not gonna be easy."

Despite everything Paul has been through, he tries to stay as positive as possible.

“I keep an upbeat attitude because I just know there are some kids who have it worse than me,” he recently told Entertainment Tonight, during an interview with his family, which also includes 10-year-old brother Daniel.

“I just wanted to be thankful to all those nurses and doctors for saving my life," he added.