Fermentation is a case of what's old is new again – an ancient food-processing method turned hot trend, with companies churning out products incorporating kefir, kimchi, sauerkraut and kombucha that are promoted as being probiotics. But do these foods offer true probiotic benefits? The short answer is probably not. But that doesn't mean these foods are without benefit.

First, let's clear up what "probiotic" means. Scientists define probiotics as live microorganisms (microbes) which, when administered in adequate amounts, confer a health benefit. Probiotics can contribute to digestive and immune system health and crowd out harmful microbes in the gut (large intestine). They also create some nutrients, including vitamin K and many of the B vitamins, and help our bodies absorb other nutrients. 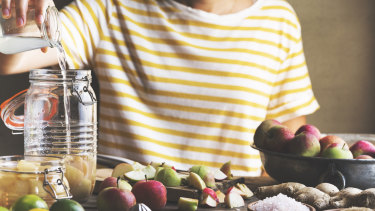 Fermentation helps preserve food by suppressing microbes that might make us sick – something humans figured out early onCredit:iStock

However, most fermented foods do not meet these criteria, and would not give you the same benefit as a probiotic supplement might.

Robert Hutkins, a food science professor and researcher at the University of Nebraska at Lincoln and author of Microbiology and Technology of Fermented Foods, said that most microbes – which include fungi as well as bacteria – in fermented foods have not been characterised or defined, let alone tested in clinical trials to see if they offer probiotic health benefits. This is partly due to logistics – the specific microbes in fermented foods vary by manufacturer, batch and location.

"We don't know how many bacteria are helping us," said Cynthia Lair, a nutrition faculty member at Bastyr University near Seattle, and author of Sourdough on the Rise: How to Confidently Make Whole Grain Sourdough Breads at Home. "We haven't even identified them all, so they certainly haven't all been studied."

And then there's the issue of how many live microbes might be needed to confer any benefit. Some fermented foods – including fresh kimchi, sauerkraut and sour pickles, as well as yoghurt, kefir and kombucha – can contain 1 million to 1 trillion live microbes per gram. With other foods, the microbes are killed by baking, pasteurisation or filtering. These include tempeh, most soy sauces, beer and wine, as well as any shelf-stable fermented foods. Aged cheeses retain few live microbes, and it was long thought that baking killed all the microbes in fermented breads. That is not the case, as Lair discovered when she created a new sourdough starter from a piece of one of her home-baked loaves.

A review published in August in the journal Nutrients found that clinical evidence for the role of fermented foods in digestive health and disease is extremely limited, although laboratory evidence is promising. The health effects of kefir – a fermented dairy beverage – are the best studied, but the rest of the fermented food world is more of a question mark.

So if they're not "probiotic", what do fermented foods do for you? Plenty, as it turns out.

Fermentation helps preserve food by suppressing microbes that might make us sick – something humans figured out early on. "Properly made cheese and sausages would have lasted for months or years, providing a stable source of protein, minerals, and vitamins for when food resources were scarce," Hutkins said. "Even today, fermented foods serve as an excellent source of these nutrients." He points to cheese and yoghurt, which are among the best sources of calcium in the human diet, as well as fermented vegetables such as kimchi and sauerkraut, which contain B vitamins and vitamin C.

Hutkins said that even when there are no live microbes left in the finished food, the dead microbes may still enhance the food's nutritional value. For example, microbes in sourdough bread deactivate phytic acid, an "anti-nutrient," increasing the bioavailability of minerals and protein. Certain antioxidant phytochemicals – natural compounds in plant foods that have demonstrated health benefits for humans – found in grains, fruits, and vegetables may also become more bioavailable during fermentation. And if you enjoy a glass of wine in the evening, you will appreciate that the alcohol produced during fermentation helps pull phytochemicals out of the grapes and into the wine.

Clinical evidence for the role of fermented foods in digestive health and disease is extremely limited, although laboratory evidence is promising.

Fermentation transforms some foods in ways that enhances their digestibility, Hutkins said. "For example, lactose-intolerant individuals can consume yoghurt, even though it contains lactose, because the yoghurt microbes provide the lactase enzyme needed to digest that lactose," he said. "Lactose-intolerant individuals can usually also consume aged cheese, because the lactose is removed during fermentation."

Can't digest raw cabbage? You might do okay with kraut, which Lair likes because it provides both microbes as well as the prebiotic fiber that serves as food for the beneficial bacteria in your gut. "That's why I like the krauts and the breads, because you're getting both."

Have you ever heard someone say that they can tolerate bread only in Europe? The assumption is that the wheat is different, but we export a lot of our wheat to Europe. (That pasta you love in Italy is probably made from wheat grown right here.) What's probably different is how the bread is made. European bread is more likely to be made using fermentation, which can break down carbohydrates and proteins – namely fructans and gluten – that cause digestive distress for some people. But this does not make fermented bread safe for people with celiac disease.

Unfortunately, most "sourdough" breads get their sour taste from added flavours, not from fermentation. One clue: If yeast is one of the ingredients, then it's not true, fermented sourdough. Artisan bakeries are one place to get fermented sourdough, but Lair also recommends talking to bread sellers at farmers markets – they will be happy to chat about their process.

While it's unclear where any benefits in fermented foods might come from – the microbes, byproducts of fermentation or the nutritional content of the food itself – what is clear is that fermentation enhances flavour. There are thousands of food-microbe combinations, each creating unique tastes and textures. Just think of what happens when microbes convert milk to tangy yoghurt or kefir, or fresh olives – which are so bitter that they are inedible – into something delicious.

Hutkins said the beauty of fermented foods is in the eye, or palate, of the beholder. "The sensory benefits of fermented foods often take time and practice to appreciate," he said. For example, most cheeses develop bitter flavours as they age, and some beers (think IPAs) are prized for their bitterness. Fermentation also creates umami flavours in soy sauce, miso and fish sauce, and the sour vinegar-like flavour in kombucha. "If you've been to the Far East, you may have had natto, a soybean mixture noted for its pungent flavour and very slimy texture. It's definitely an acquired taste."

Hutkins said some fermented foods, such as yoghurt and bread, are at their prime within hours, whereas others take months or years – as with an 18-year-old Scotch – and increase in value as they age. "I have a small, 125-millilitre container of 20-year balsamic vinegar I purchased in Italy for $100," he said. "For vinegar!"

Dennett is a US-registered dietitian nutritionist and owner of Nutrition by Carrie.