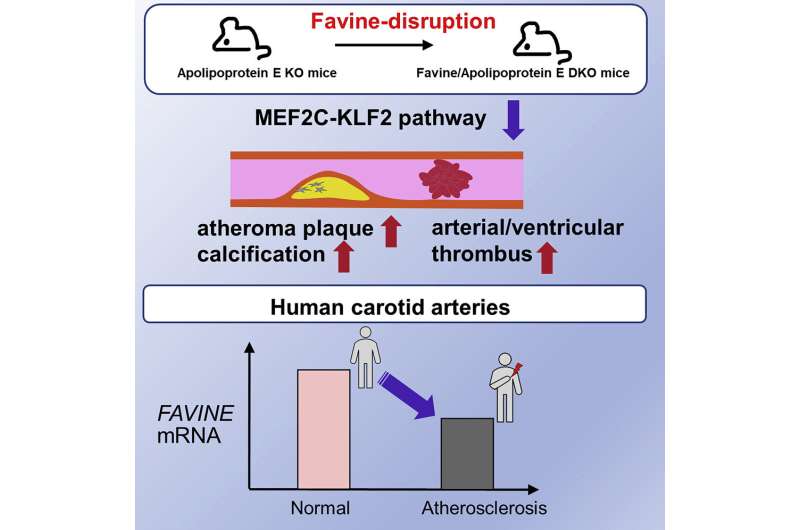 Atherosclerosis, the clogging of the arteries with fatty plaques, is a major cause of death worldwide. Human atherosclerosis often involves calcification (or a build-up of calcium) in the arteries, and thrombosis, where a blood clot (or “thrombus”) blocks the blood vessel. Studies of atherosclerosis have been hindered by the lack of a mouse model for these two processes, but this is no longer the case, thanks to a research team at Osaka University who has developed such a model.

The team has shown that the lack of a protein known as Favine in mice accelerates the process of atherosclerosis, and also leads to spontaneous calcification and thrombus formation. Favine was originally identified by the same team as a protein that is expressed at high levels in human arteries, and so the team wondered if it played a role in atherosclerosis.

The most widely used model of atherosclerosis is a mouse lacking the protein “apolipoprotein E,” or ApoE. Using mice without ApoE that they engineered to also lack Favine, the team observed the formation of advanced human-like atherosclerotic lesions in the blood vessels of the mice, including calcification and thrombosis.

They also observed decreased levels of molecules involved in a signaling pathway known as the “MEF2C-KLF2 pathway.” The molecule called MEF2C is known to be protective against atherosclerosis. Taken together, the mice lacking both ApoE and Favine showed gene expression changes that could lead to spontaneous thrombus formation.

“Not only that, but a correlation analysis of the gene expression in these double-knockout mice and unstable plaques from humans showed a positive correlation,” explains first author Sachiko Kobayashi. “This means that these mice are an accurate model for human atherosclerosis.”

The identification of the association between reduced levels of Favine, deficiencies of the downstream signaling pathways, and calcification and thrombus formation reveals a new avenue for the treatment of atherosclerosis. “The exacerbation of the development of human-like atherosclerotic lesions in ApoE and Favine double-knockout mice implies that Favine and the MEF2C-KLF2 pathway are involved in the development of unstable atherosclerotic plaques in humans,” explains senior author Iichiro Shimomura. “This also indicates that therapies targeting this pathway may well be effective against atherosclerosis.”