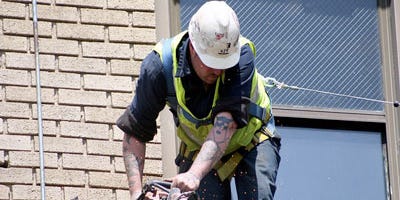 As some of America's largest cities shut down, construction sites have remained open. Construction workers, already working one of the deadliest jobs in New York, have been deemed essential laborers, just like doctors, pharmacists, and funeral service workers. What an essential laborer is varies from state to state.

In Pennsylvania, the governor shut down all non life-sustaining businesses, including construction, while in states like New York and California, construction workers are still on the job.

At Facebook's New York offices on 770 Broadway, where a cafeteria and new offices are being built, a construction worker tested positive for the coronavirus last week, but work continued. Work also continued on Manhattan's new Hard Rock Hotel, even as rumors spread about four people on the building site testing positive for coronavirus.

In a press conference on March 22, New York Mayor Bill de Blasio was asked why the Department of Buildings had not shut down construction, given construction workers were cramming into an elevators to go up 50 stories to work on a luxury condos.

"A lot of what is constructed obviously is crucial to our future," de Blasio said. "You and I would agree that luxury condos are not the priority in this city, but there's a lot of other things being worked on that are important," such as low-cost housing.

Some powerful unions have agreed with de Blasio, including NYC's Building Trades. Union president Gary Barbera wrote in a statement to Insider that "as much as we possibly can, New York must maintain some level of economic activity, especially when it comes to ensuring that our middle-class workers continue to receive wages and benefits that sustain their livelihood."

There is no way to socially distance while doing construction, workers' wives said

For one Bronx man, reporting to work during coronavirus meant endangering his family's health.

Katie, who requested her last name be withheld from the article, told Insider that her husband, who's been a construction supervisor for over 13 years, reported to work at the $1.5 billion dollar Javits Expansion on the week of March 16.

By March 22, both Katie and her husband had developed sudden coughs, and were self-isolating because they couldn't get tests. Though the Javits Center is now, as of March 24, being converted into a makeshift hospital to handle all the surging number of coronavirus cases in New York, Katie's husband is out sick.

"Construction is an inherently unsafe and dangerous profession, and it requires you to work in groups or teams," she said. "There is no way to socially distance while doing the job, none."

While Katie is grateful her husband is at home, she's concerned companies won't act unless prompted to do so by the government, and she's concerned many of her husband's colleagues, immigrants with no choice but to show up even when sick, will risk their lives.

"If he were building a hospital, I would be fully supportive," she told Insider. "But risking your own life and the lives of your workers to build luxury condos is completely unacceptable. The millionaire and billionaire developers can wait an extra month or two for their projects."

Another construction worker's wife, who also requested anonymity, told Insider: "Almost all sites have no soap, sanitizer, and close to zero N95 masks."

Her husband works in a residential building, in close quarters with others. "His boss doesn't really want to work either but it's mandatory as long as the governor says it is. Everyone involved is hoping and pleading for them to stop the non-essential construction jobs."

Laborers may be needed to build hospitals in the coming months, but not if 'all of our workforce is hit by the virus'

Hundreds of workers began posting pictures of their squashed, unsanitary work spaces under the hashtag #StopConstruction. Over 600 people signed a Change.org petition, created by the Worker's Coalition, an ad-hoc group of construction workers coming together to stop construction. New York council members Brad Lander, Carlos Menchaca, and Jumaane Williams all called for a stop in construction work.

"Forget the schedule, forget liquidated damages, forget profit. These are people's lives," he wrote, adding: "we may need to be building temporary hospitals in the upcoming months and we won't be able to if all of our workforce is being hit directly by this virus."