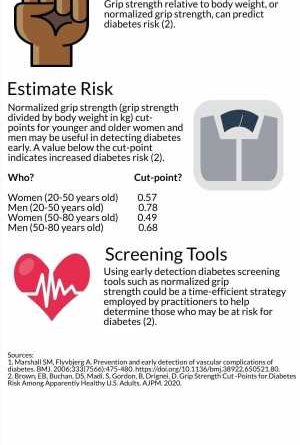 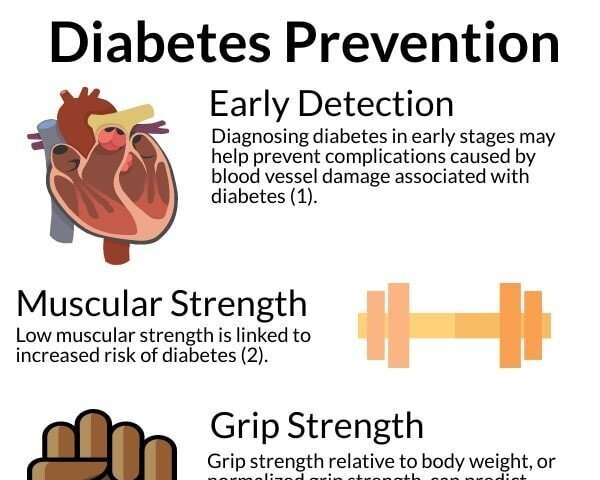 Muscular weakness is known to be associated with T2DM in otherwise seemingly healthy adults, however previous research had not found a way to assess this reliably. The current study was able to identify consistent grip strength cut points relative to body weight, gender, and age group in a large nationally representative sample of participants pre-screened for comorbid conditions such as hypertension.

“As the type 2 diabetes patient population continues to increase in the United States, diagnosing this disease in its early stages is becoming increasingly more important for preventing complications caused by blood vessel damage associated with diabetes. Our study identifies the levels of handgrip strength/weakness that correlate with T2DM in otherwise healthy men and women, according to their body weights and ages. Healthcare providers now have a reliable test to detect it early before such complications set in,” explained lead investigator Elise C. Brown, Ph.D., Department of Public and Environmental Wellness, Oakland University, Rochester, MI, USA.

T2DM is linked to increased cardiovascular-related morbidity and mortality. Undiagnosed prediabetes and T2DM in the US in 2017 were estimated to cost $43.4 and $31.7 billion, respectively. This economic burden highlights the need for better early detection efforts. T2DM is asymptomatic in its initial stages, and a prompt diagnosis can prevent or delay vascular complications such as neuropathy, retinopathy and nephropathy.

Researchers analyzed survey data from the 2011-2012 and 2013-2014 National Health and Nutrition Examination Survey to establish normalized grip strength (grip strength relative to body weight) cut points for T2DM risk. Inexpensive portable handgrip dynamometer devices were used to determine hand and forearm strength. After controlling for sociodemographics (i.e., race/ethnicity, education, poverty, sex, and age), lifestyle factors (i.e., sedentary behavior, alcohol use, and smoking status), and waist circumference, the investigators identified the grip strength levels of at-risk patients who were otherwise healthy. These levels are presented with age- and sex-specific grip strength cut points that correspond to varying body weights to increase the ease of use for practitioners as indicators of when further diabetes diagnostic testing is warranted.

For example, the cut point for women aged 50-80 years is 0.49. This means that if a 60-year old woman’s combined grip strength from left and right hands was 43 kg, and her body weight was 90 kg, her normalized grip strength would be 0.478. Since this value is less than 0.49, this indicates that she is at increased risk for diabetes and further screening is warranted.