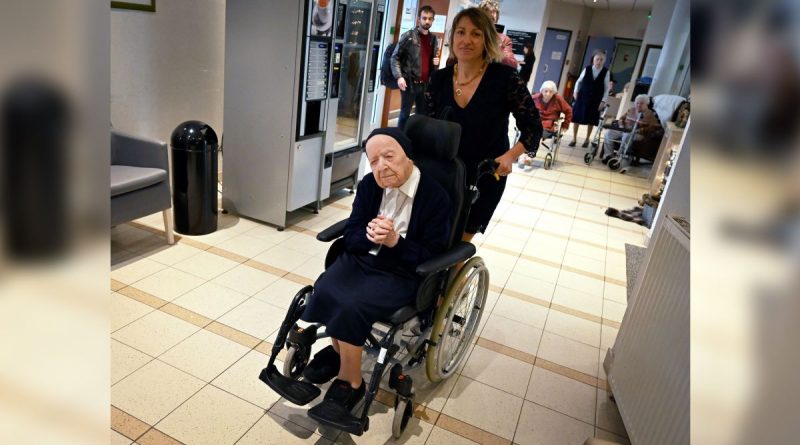 Europe’s oldest person has recovered from COVID-19 in time for her 117th birthday this week, according to recent news reports.

Lucile Randon or Sister André, a French nun who was born in 1904, tested positive for the coronavirus on Jan. 16 at a nursing home in Toulon, France, Reuters reported. Despite having a much greater risk than a younger person of developing severe COVID-19 due to her age, she did not show any symptoms. “I didn’t even realize I had it,” Sister André told Var-Matin, a French newspaper.

When she tested positive for the virus, she wasn’t afraid.

“She didn’t ask me about her health, but about her habits,” David Tavella, a spokesperson for the home told Var-Matin. “For example, she wanted to know if meal or bedtime schedules would change. She showed no fear of the disease. On the other hand, she was very concerned about the other residents.”

In the Sainte-Catherine Labouré home where Sister André lives, 81 of the 88 residents tested positive for the virus and 10 have died, according to Var-Matin. But Sister André was one of the lucky ones. “We consider her to be cured. She is very calm, and she is looking forward to celebrating her 117th birthday on Thursday [Feb. 11],” Tavella said.

André, who was born on Feb. 11, 1904, is the world’s second oldest person alive today after Kane Tanaka who turned 118 on Jan. 2, according to the Gerontology Research Group.

—The 12 deadliest viruses on Earth

How did she live so long and survive an infection that has taken down even the young and fit? It’s unclear. Supercentenarians, or people who are 110 years old or older, may have higher than normal amounts of a type of killer immune cell in their blood that might protect them from viruses and tumors, Live Science previously reported.

In a small study of seven supercentenarians, researchers found that a large proportion of their immune cells were made up of a rare type of T helper cell that can attack and kill other cells. While only 2.8% of T helper cells in young people had this ability, in supercentenarians, that number was 25%, according to the study, which was published Nov. 12, 2020, in the journal Proceedings of the National Academy of Sciences. Still, the results can’t say for sure whether these cells helped Sister André beat the virus.

Sister André told reporters a year ago, at an event to celebrate her 116th birthday, that she eats a piece of chocolate every morning. Perhaps, it couldn’t hurt.