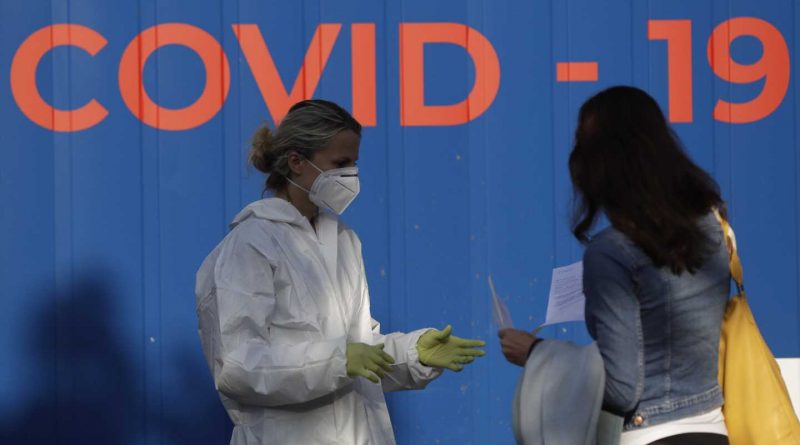 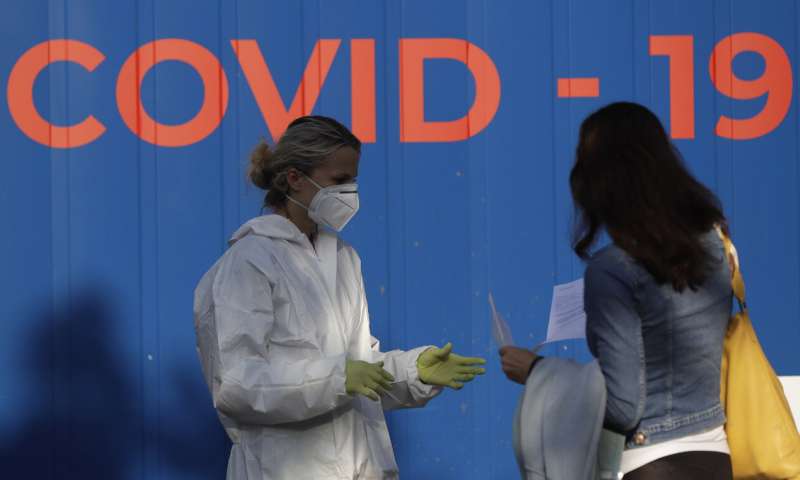 Political pressure grew Monday for European governments to tackle the rising number of coronavirus case without resorting to a spring-style lockdown that would hit the continent’s struggling economies.

Data released by the European Center for Disease Prevention and Control showed five countries in the region with more than 120 confirmed cases per 100,000 inhabitants in the last 14 days. Spain was ranked top of the grim table, with almost all of its regions colored crimson on a map that also showed swathes of dark red spreading across southern France, the Czech Republic, Croatia and Romania.

Spanish Prime Minister Pedro Sánchez met Monday with the president of the Madrid region, Isabel Díaz Ayuso, to coordinate a stronger response to the outbreaks as the country struggles to contain a second wave of the virus.

Díaz Ayuso, who heads a center-right coalition, has been one of the leading critics of the left-leaning central government even as her own administration has been blamed for not putting enough resources into primary care or contact tracers to identify possible new sources of contagion in the capital.

Madrid’s rate of infection of 683 cases per 100,000 inhabitants in the past two weeks is nearly three times higher than the national average. 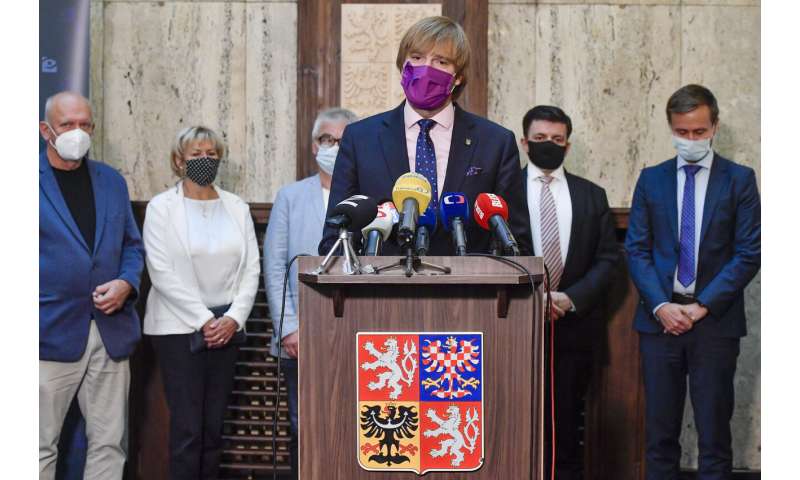 Police in the Spanish capital and its surrounding towns began stopping people coming in and out of working-class neighborhoods that have seen 14-day transmission rates above 1,000 per 100,000 inhabitants. The measure has been met with protests from people who think the restrictions stigmatize the poor.

Some 860,000 residents are affected by the new restrictions, having to justify their trips out of their neighborhoods for work, study or medical reasons. Parks are closed and shops and restaurants must limit their occupancy to 50% in the affected zones.

Authorities say those unable to justify their trips will face fines starting Wednesday.

COVID-19 has killed at least 30,000 people in Spain since the start of the outbreak, according to the country’s health ministry.

In the Czech Republic, Health Minister Adam Vojtech resigned Monday amid a record rise of coronavirus infections, saying his move should create space for a new approach to the pandemic. 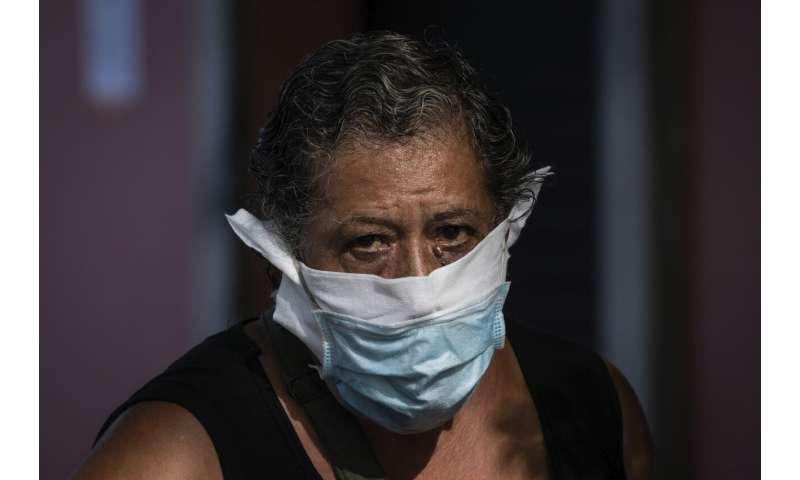 The central European country coped well with the first infection wave in the spring but has now faced a record surge. On Thursday it recorded more than 3,000 new cases, almost the same number as it did in all of March.

The Czech Republic has had a total of 49,290 infected with 503 deaths since the start of the pandemic.

Neighboring Poland is also seeing a spike in new cases that experts link to the return to schools and offices, with a record 1,002 reported Saturday, and almost 750 Monday.

Britain’s chief medical officer Chris Whitty and chief scientific officer Patrick Vallance warned Monday that infection rates in the country are going in the “wrong direction” and the U.K. faces a challenging winter.

Prime Minister Boris Johnson huddled with ministers over the weekend to discuss the government’s reaction. Analysts expect the government to announce a slate of short-term restrictions that will act as a “circuit breaker” to slow the spread of the disease. 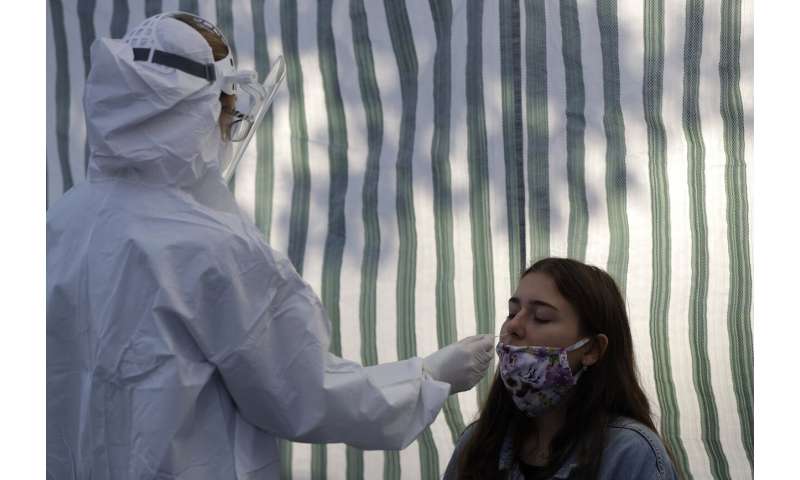 While death rates in Britain have remained relatively low recently, with a seven-day average of 21 deaths a day last week compared with a peak of 942 on April 10, public health officials warn that deaths are likely to rise.

There is particular concern that infections, currently affecting mainly working-age people, could creep back into the vulnerable elderly population and lead to a spike in deaths.

French health authorities have started opening new testing centers in the Paris region to try to reduce queues and delays as the number of virus infections steadily increases.

In total, 20 new testing centers were scheduled to open in the French capital and its suburbs this week.

Patricia Sakoun, whose son tested positive, came to one of the new centers in Paris hoping to quickly get a test for herself. 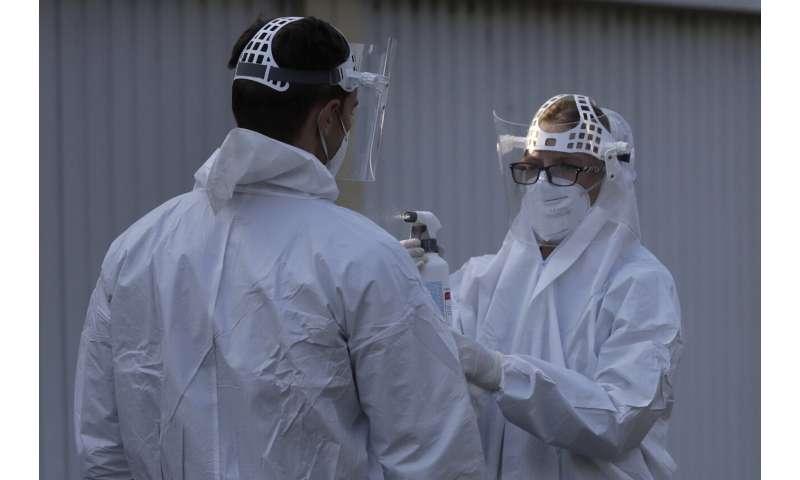 “I just told them I am sick, I need results quickly and they told me that the results will be ready in seven days,” she told The Associated Press.

All people in France are allowed to get the test for free, whether they have symptoms or not.

Infections in France reached a new record-high this weekend with over 13,000 new cases in 24 hours. There have been at least 31,285 deaths in the country since the start of the pandemic—one of the highest death tolls in Europe.

The governor of Bavaria, Markus Soeder, warned conditions could worsen as temperatures drop in the coming weeks and people spend more time indoors.

The state capital, Munich, imposed local restrictions starting Thursday to rein in its galloping infection rates, including limiting the number of people allowed to meet in public to five or members of two households, and capping private indoor gatherings such as birthday parties, weddings or funerals at 25 people. 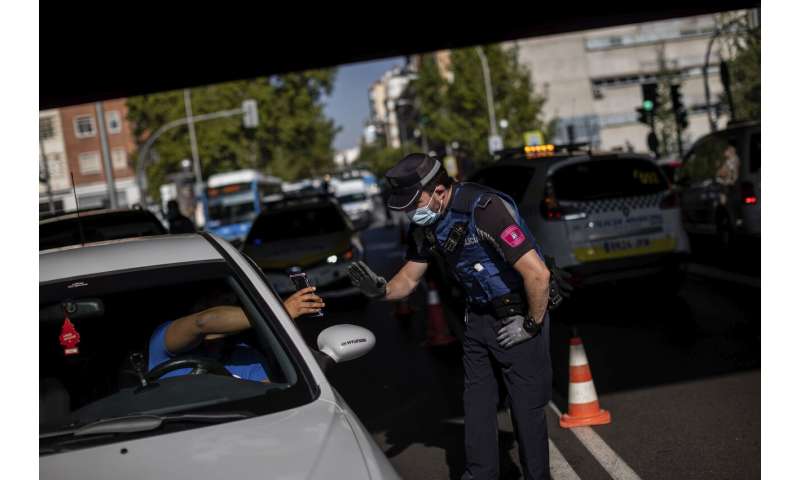 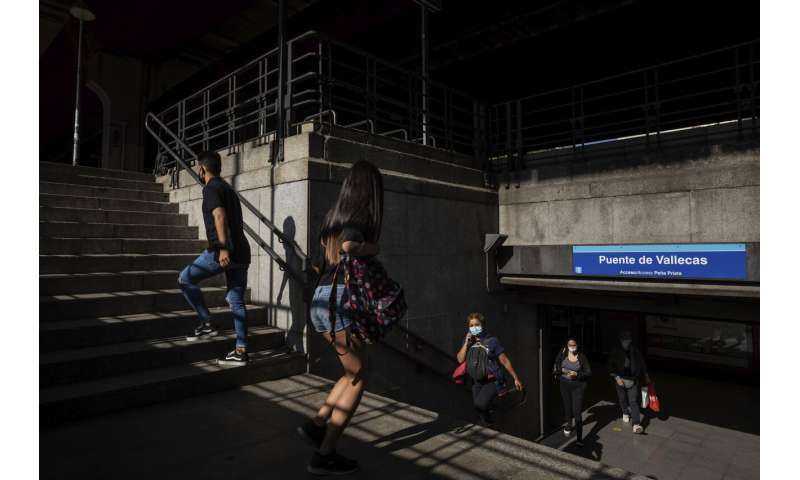 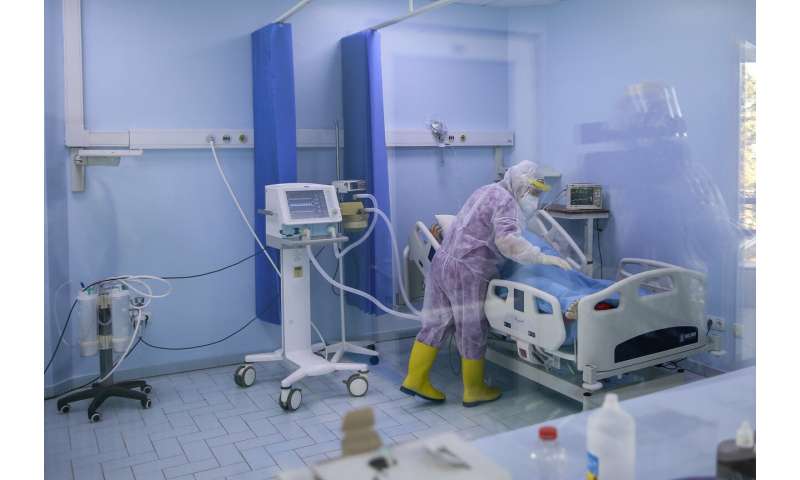 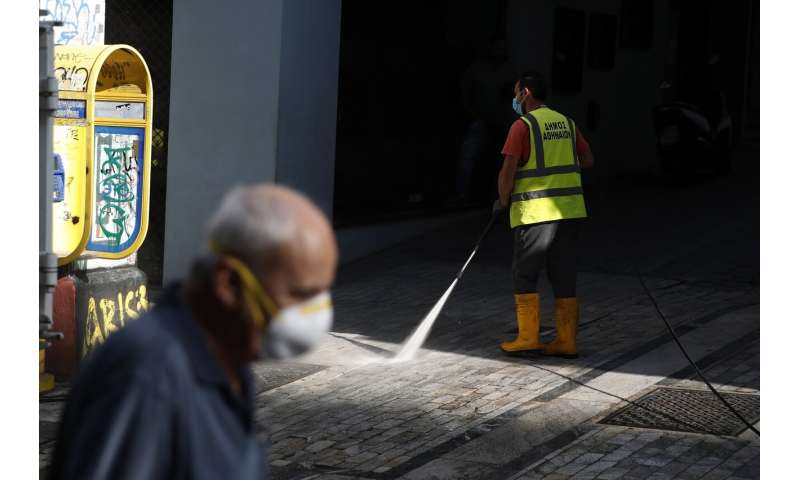 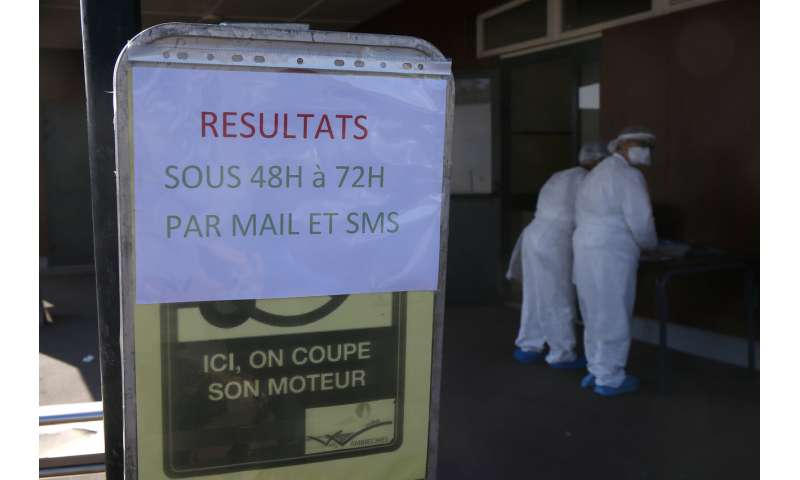 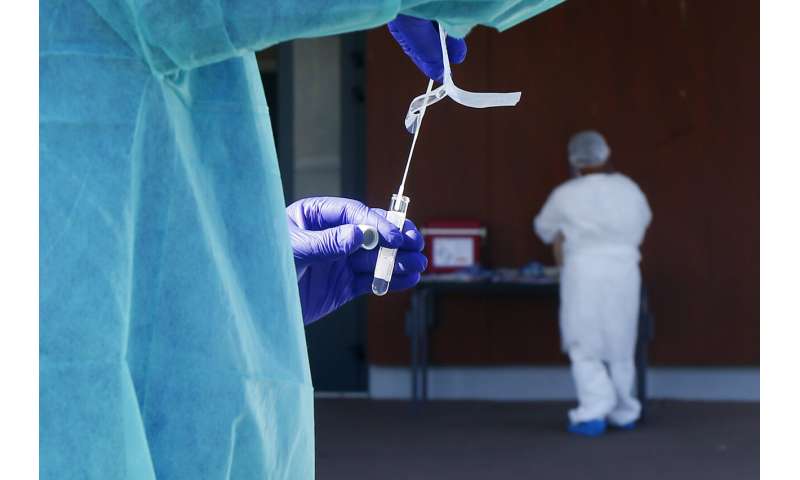 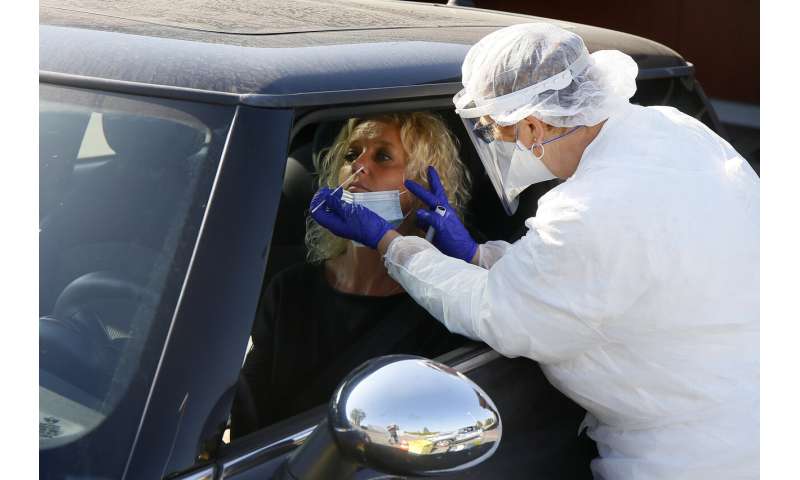 “We have to drastically reduce the number of people getting together,” Mayor Dieter Reiter said, criticizing the fact that many in Munich no longer adhere to social distancing rules.

While Germany as a whole has seen a smaller rise in new infections than many other European countries, Health Minister Jens Spahn cautioned that the spikes seen in neighboring nations would likely affect the German case numbers too.

The government plans soon to offer quicker tests and open dedicated walk-in “fever clinics” to separate patients with COVID-like symptoms from others.

Spahn warned that weddings, bars, clubs, religious and family gatherings have emerged as the main sites where the virus is spread.