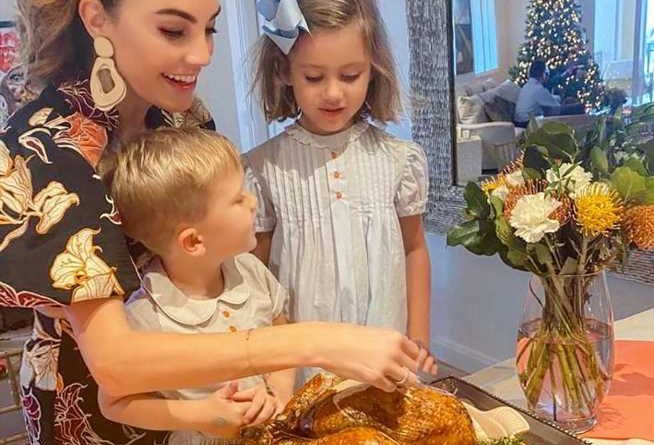 Elizabeth Chambers enjoyed turkey with her little ones this Thanksgiving.

The television personality and BIRD Bakery founder, who announced her split from husband Armie Hammer in July, shared several photos of herself and their children — son Ford Douglas Armand, 3½, and daughter Harper Grace, 5 — celebrating the holiday from the Cayman Islands on Thursday.

"Happy Thanksgiving, from our family to yours," Chambers, 38, wrote on Instagram. "Sending so much love. 🧡."

In the slideshow, the mom can be seen undoing the trusses on a roasted turkey as her kids look on. Another shot shows Chambers giving Ford a kiss as Harper poses with a pumpkin. Chambers and her children are currently staying in the Cayman Islands, where they had quarantined with Hammer, 34, at the start of the coronavirus pandemic.

A source previously told PEOPLE that Hammer "was supposed to fly to the Cayman Islands, quarantine and then spend Thanksgiving with the kids and his family, flying back to L.A. all together in mid December."

However, according to a second source, "he was unable to travel there after repeated attempts."

"When air travel reopened, he applied for a visa that has not been approved, " the source said.

The holiday season comes as Hammer and Chambers are submitting filings in their upcoming divorce case. In his latest filing, the Call Me By Your Name star has requested that Chambers return to the U.S. to arrange a custody schedule for their children. A source told PEOPLE at the time, "These are crazy times with COVID-19, shutting schools down in L.A. and Elizabeth just wants the kids to have a normal experience."

Harper and Ford have enrolled at the same school Hammer attended when he was younger. (The actor's family moved to the Cayman Islands when he was 7, where they lived for five years.)

"The kids are able to attend school, play with their friends and lead a fairly normal life in the Cayman Islands. If they were in L.A., they would be stuck in front of a computer," added the source.