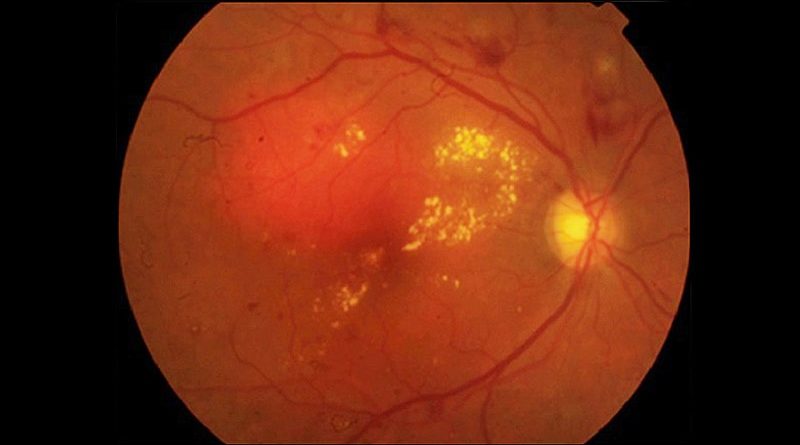 Brolucizumab (Beovu) can improve visual acuity of patients with diabetic macular edema (DME) using fewer injections than needed for aflibercept (Eylea), but this advantage may come at the cost of vision-threatening intraocular inflammation for some patients, researchers say.

The finding could cloud the future of the new drug as a treatment for DME in the same way that postmarket reports of intraocular inflammation have deterred many physicians from prescribing it for neovascular age-related macular degeneration (nAMD).

“The safety concerns are still there,” said Jayanth Sridhar, MD, associate professor of clinical ophthalmology at the Bascom Palmer Eye Institute in Miami, Florida, in an interview with Medscape Medical News. “That is really the elephant in the room.” Sridhar was not involved in the study.

Although aflibercept and other antivascular endothelial growth factor (VEGF) drugs work well for both nAMD and DME, they require frequent, uncomfortable injections. Many patients don’t get frequent enough treatments, and in the real world the results with these have fallen short of their success in clinical trials.

Brolucizumab’s designers hoped to address this problem by creating a drug with more durable effects so patients could improve their vision with less frequent injections.

HAWK and HARRIER, the pivotal trials that led to approval of brolucizumab for nAMD, looked so encouraging that the US Food and Drug Administration approved 6-mg doses for that indication in October 2019. But in June 2020, after reports of severe vision loss associated with retinal vasculitis or retinal vascular occlusion, the agency added a warning about this risk to the drug’s label.

Now Novartis has completed two trials of the drug for diabetic macular edema, KITE and KESTREL. Ramin Tadayoni, MD, PhD, an ophthalmology professor at the University of Paris, France, presented the findings at the virtual European Society of Retina Specialists (EURETINA) 2021 meeting.

In these trials, patients in the brolucizumab groups started with a loading phase of five injections spaced 6 weeks apart. They then received injections every 12 weeks. If disease activity was observed, this interval was shortened to 8 weeks. In KESTREL, 55.1% of these patients stayed on a 12-week regimen until the last follow-up at week 52. In KITE, 50.3% stayed on the regimen.

Patients in the aflibercept groups started with a loading phase of five injections spaced 4 weeks apart. They then received injections every 8 weeks.

“So with fewer injections, it was possible to be noninferior in terms of visual acuity, and in terms of anatomic results, there are even indications that the patients on brolucizumab are doing better than aflibercept bimonthly,” Tadayoni told Medscape.

Clinicians will have to weigh the pros and cons of the drug for each patient, Tadayoni said. “There are some patients who will not be able to do monthly injections, and you will not achieve what you expect. And here you have the possibility with a longer lasting drug to achieve a good result. But of course, there is still this discussion about the risk of vascular occlusion to put in front.”

No one at Bascom Palmer Institute is using brolucizumab for nAMD, Sridhar said, and he doesn’t plan to use it for DME based on this data. “If I had a patient who didn’t respond to current anti-VEGF therapy, I’d be inclined to try a second anti-VEGF agent that was not brolucizumab,” he said. “And if they still were not responsive, then I’d be inclined to try corticosteroids.”

Whereas corticosteroids can cause cataracts and raise intraocular pressure, these side effects are easily treatable, while vascular occlusion is not, Sridhar pointed out.

Laird Harrison writes about science, health and culture. His work has appeared in national magazines, in newspapers, on public radio and on websites. He is at work on a novel about alternate realities in physics. Harrison teaches writing at the Writers Grotto. Visit him at lairdharrison.com or follow him on Twitter: @LairdH