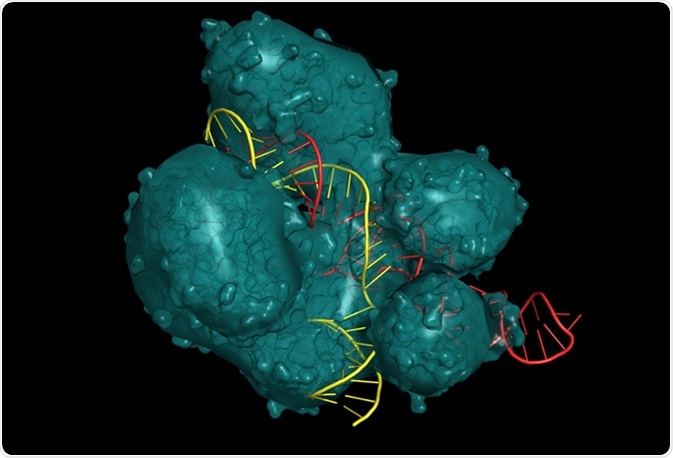 These CRISPR regions are originally located between regions of foreign nucleotides, derived from previous viral infections. CRISPR associated system (Cas) genes are also located nearby, which encode the enzymes, endonucleases and helicases. These enzymes are transcribed and utilized to cut invading bacteriophage DNA into fragments, which are then stored within the host genome by Cas1 and Cas2. These stored sequences can then be transcribed to form crRNA and used to detect future infections by binding to complementary sequences and allowing them to be cleaved.

The most common and simplest version of this system is the type II system found in Streptococcus pyogenes, whichutilizes endonuclease Cas9 and two types of RNA. In 2013, Lei S Qi et al used this system to transiently silence genes via transcriptional repression. They designed a catalytically dead form of the Cas9 gene (dCas9) by introducing point mutations within the catalytic residue of the nuclease (D10A and H840A). These mutations ensured that the transcribed Cas9 endonuclease could not cut through the double-stranded DNA, but allowed it to be guided using RNA.

To allow specific genes to be targeted, synthesis single guide RNAs (sgRNA) can be manufactured, composed of chimeric noncoding RNA sequences. These sgRNA sequences contain three regions which are vital for function; a base-pairing region (20 nt), a dCas9-binding handle, (42 nt) and a terminator region (40 nt). The base pairing region can be altered in each case to target a specific gene and guide the dCas9.

Cas9 can be applied to bind to a short DNA motif called the protospacer adjacent motif (PAM) at the 3’-end of the target DNA, blocking the action of RNA polymerase, and hence preventing transcriptional elongation. This acts to reduce the amount of transcriptional activity by “interference” and so reduces the associated gene expression. It has been shown that this application can reduce gene expression by 1000-fold.

This genetic technique has many possible uses in research. Firstly, it has been shown to knock down a large proportion of the human genome efficiently, which makes it valuable for research applications. This is particularly helping in identifying genetic sequences involved in hereditary diseases such as certain forms of cancer. Additionally, it could be very useful within stem cell research ,especially to induce pluripotency in adult cells.

Additionally, this CRISPRi system has been shown to have a potential use in transcriptional up-regulation through the attachment of transcription activators, such as VP16, to investigate the roles of increased gene expression in a disease.

The advantages and limitations of CRISPRi

This genetic perturbation technique is very promising in areas such as genome engineering and stem cell research.

However, the CRISPRi technique has a few limitations. It can affect the nearby genes, sometimes leading to unexpected adverse effects. Additionally, it relies on the use of PAM and therefore, limits the number of genes that can be targeted.

Advantage of CRISPRi is that it can efficiently and specifically decrease gene expression by up to 99%. Additionally, CRISPRi has a significant advantage over the application of RNA interference (RNAi) method in that CRISPRi is easy to modify and can be used in ex-vivo cell therapy settings as well.

In conclusion, the use of CRISPRi technique would greatly help in the field of germline gene therapy and in developing sequence-targeted precision medicines.

Hannah is a medical and life sciences writer with a Master of Science (M.Sc.) degree from Lancaster University, UK. Before becoming a writer, Hannah's research focussed on the discovery of biomarkers for Alzheimer's and Parkinson's disease. She also worked to further elucidate the biological pathways involved in these diseases. Outside of her work, Hannah enjoys swimming, taking her dog for a walk and travelling the world.