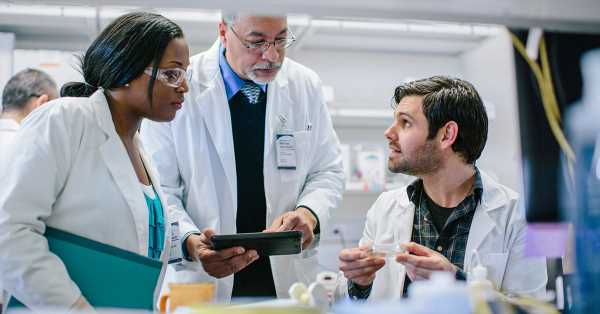 Immune cells that have been genetically edited can survive and kill cancer cells months after a person being treated for cancer receives them.

Researchers from the University of Pennsylvania, in cooperation with the Parker Institute for Cancer Immunotherapy, reported their findings in a new study published today.

They said they could successfully perform multiple edits on immune cells called T cells. They added that those cells also lived longer in the body than any previous studies had demonstrated.

They were able to do this using the gene editing technology known as CRISPR.

“The human genome consists of 3 billion letters that encode all of our genes. CRISPR technology is a form of molecular scissors that is able to find ‘the needle in the haystack’ and precisely find and then rewrite the genetic code at any desired location,” Dr. Carl June, senior author of the study and a professor of immunotherapy at the University of Pennsylvania, told Healthline.

“Cancers have evolved many mechanisms to turn off the natural immune system,” June explained. “The field of synthetic biology uses approaches to enhance the functions of T cells beyond how they have naturally evolved.”

“Our goal was to make the genetically edited T cells have a more prolonged and potent activity against tumors than natural unedited T cells would have,” he continued.

T cells are a type of white blood cell that fight infection and cancer and can live for 50 years in the human body.

They check cells throughout the body to see if any are infected, mutated, or stressed.

If the T cells find something wrong with a cell, they’ll kill it and also remember it so they can kill it again if they come across the same kind of infected cell in the future.

In people who have cancer, the T cells are either tired or the cancer has found a way to evade them.

In undertaking the study, the researchers collected a person’s T cells from their blood. They then performed three genetic edits using CRISPR technology.

The first two edits removed the T cell’s natural receptor so that they could later re-program the cell with a synthetic receptor that would allow the T cell to find and kill tumors.

The final edit removed a natural checkpoint that can occasionally prevent the T cell from properly doing its job.

The technique is similar to another form of genetic engineering called CAR-T cell therapy but with potential added benefits.

“CRISPR technology has the potential for creating what we call off the shelf CAR-T therapies. What we’re seeing here is they can actually modify the T cell genetically in a way to make it more effective in recognizing cancer cells without having the serious adverse effects that can occur in more traditional CAR-T therapies,” Dr. J. Leonard Lichtenfeld, MACP, deputy chief medical officer for the American Cancer Society, told Healthline.

Looking toward the future

Lichtenfeld said many in the field of cancer research are hopeful the results of this latest study will lead to further success.

“They’ve accomplished quite a bit. You’re doing multiple edits, you’re transforming the cell, and then you’re giving it back and the body didn’t reject the cells, the cells grew over time and maintained their effectiveness,” he explained.

“It holds the hope that we can continue to expand our techniques in particular when it comes to our immune systems to fight cancer even in the advanced stages,” he said. “This is the very first step in what’s going to be a complicated, longer term pathway to determine if this particular approach works effectively against cancer.”

The Penn research was conducted on just 3 people, but the researchers said the findings provide a proof of concept for this kind of method.

Lisa Butterfield, PhD, vice president of research and development at the Parker Institute for Cancer Immunotherapy, said the study could pave the way for other important research.

“This trial has shown many important firsts, perhaps most importantly that it is feasible and reasonably safe to date,” Butterfield told Healthline.

Immunotherapy is an umbrella term for treatments that help the body’s immune system fight cancer.

Dr. Mehrdad Abedi, a professor of hematology and oncology at the University of California Davis, said such therapies can be less toxic to the body than other treatments.

“The most common types of cancer treatments are chemotherapy and radiation. The former works with inhibition of cell growth and division and the latter damage the genetic material… DNA… of the cancer cells and force them to die,” Abedi told Healthline.

“Both these approaches can inflict a significant damage to normal cells that explain the usual toxicities of chemotherapy and radiation,” he said. “Immunotherapy… can be designed to directly target the cancer cells and avoid toxicity to other organs.”

June said the use of immunotherapy represents the greatest advancement in the field of cancer research of the past 50 years.

He’s hopeful that CRISPR technology, when combined with CAR-T cells, will further build upon these successes.

Experts say the potential of these latest technologies in immunotherapy could change approaches to cancer treatment completely.

“The impact is already huge, and it is going to get bigger. Hopefully, we will get rid of chemotherapy and radiation soon,” Dr. Preet M. Chaudhary, chief of the Nohl Division of Hematology and Center for Blood Diseases at the Keck School of Medicine at the University of Southern California, told Healthline.

Lichtenfeld has been involved in cancer research since the early 1970s. He said it’s unlikely he’ll see a cure for cancer in his lifetime, but he believes it’s almost certain his grandchildren will live to see the day there’s a cure.

He’s hopeful about this latest research but says there’s still a long way to go.

“I don’t want to say we have solved the problem with cancer. It’s never enough — it’s not enough,” Lichtenfeld said.

“We still have too many patients with too many cancers who do not respond to these treatments and we have to remember that. Research is progressing quickly but it does take a long time,” he added.