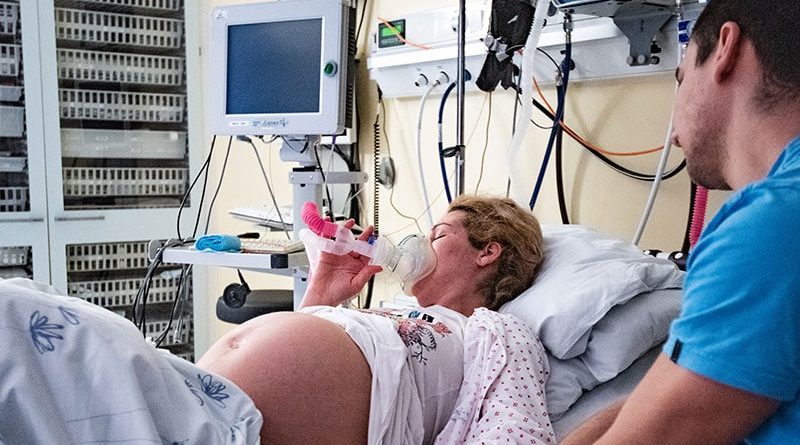 New evidence indicates that the use of “cracking” technology can significantly reduce the ambient levels of inhaled nitrous oxide (N2O) during labor, especially when women are coached on how best to use it.

The findings, from a quality improvement study conducted by anesthetists and midwives in the United Kingdom, appear to have implications for minimizing staff exposures and for lowering N2O’s environmental effect overall. The potent greenhouse gas has a carbon footprint that is 265 times larger than carbon dioxide.

“Our results indicate that cracking technology can reduce ambient nitrous oxide levels in the obstetric setting, with potential for reductions in environmental impacts and occupational exposure,” reported Annie Pinder, MBChB, a fellow in sustainable anesthesia at North West School of Anaesthesia, Manchester, England, and colleagues in Anaesthesia.

Proportionally, the United Kingdom is one of the largest users of inhaled N2O during labor, often for first-line pain control. A 2017 survey by the Care Quality Commission estimated that 77% of women in labor used inhaled N2O for pain, and that it didn’t preclude them from using other types of analgesia, including opioids, epidurals, and nonpharmacologic approaches.

For the study, median ambient N2O levels were recorded for 36 women during the final 30 minutes of uncomplicated labor. Ambient N2O levels were recorded before and after using three N2O scavenging devices that included a mouthpiece and two different low-profile anesthetic face masks. Women were also coached on how to use the devices, and given feedback.

“Given that a similar magnitude of reduction in nitrous oxide levels was seen with mouthpieces and low-profile face masks, we suggest that pregnant women should be offered the option of either device when cracking is used,” the study authors wrote.

Staff feedback was generally positive, but some found use of the technology cumbersome. Sufficient staff engagement is the key to successful implementation, the researchers pointed out.

These data are consistent with the United Kingdom’s goal of achieving a net zero carbon footprint for the National Health Service by 2040, the researchers said. The study findings are also in keeping with predictions that cracking technology could reduce greenhouse gas emissions associated with N2O by an estimated 75%.

“Although cracking may make nitrous oxide ‘greener,’ it does not make it ‘green,’ ” noted Pinder and coauthor Cliff Shelton, MBChB, in an interview. Shelton is a senior clinical lecturer in anesthesia at Lancaster (England) University and a consultant anesthetist at Wythenshawe Hospital, Manchester.

Even with the use of cracking technology, the occupational effect of inhaled N2O is likely to remain higher than for other, more effective forms of anesthesia, such as epidurals and remifentanil (Ultiva), Pinder and Shelton said. Furthermore, ambient N2O levels are not a direct measure of the proportion of nitrous oxide cracked, “so there is scope for further work to more precisely understand the ‘carbon footprint’ impacts,” they pointed out.

Inhaled N20 is widely used for labor pain in the Scandinavian countries, as well as in Canada, Australia, and New Zealand. It’s also making a comeback in the United States, facilitated by the Food and Drug Administration’s (FDA) approval of a portable N2O delivery system in 2012.

The system, which delivers a mixture of 50% nitrous oxide and 50% oxygen, has offered a new option for laboring mothers, said Robert L. Barbieri, MD, chair of obstetrics and gynecology at Brigham and Women’s Hospital, Boston, and coauthors in a 2014 report.

“Nitrous oxide works really well as an adjunct to other analgesia,” said Laura Goetzl, MD, MPH, professor of obstetrics, gynecology, and reproductive sciences at University of Texas at Houston Health Science Center. Women in labor really like having the option of inhaled N2O to manage pain, she said in an interview. “The more options that we have to offer, the better for women.”

“Not only does nitrous oxide help with perception of pain, it’s also highly effective for reducing patient anxiety,” Goetzl explained. “If a patient is waiting for an epidural, the use of nitrous oxide can be particularly helpful.”

Shelton reported that he is executive editor of Anaesthesia Reports. Pinder and the remaining coauthors disclosed having no conflicts of interest. Goetzl reported that she is on the medical advisory board of Mirvie Anaesthesia.