A team of researchers has demonstrated that the impact of the coronavirus disease 2019 (COVID-19) pandemic on excess mortality varied widely both between and within five European countries in 2020.

The team's study of England, Greece, Italy, Spain and Switzerland found that the Spanish regions of Madrid, Castile-La Mancha, Castile-Leon and the Italian region of Lombardia experienced the highest excess mortality.

In England, the most affected regions were Outer London and the West Midlands, while in Greece, Eastern, Western and Central Macedonia were the most affected. In Switzerland, the region with the highest excess mortality was the Ticino canton.

Garyfallos Konstantinoudis from Imperial College London and colleagues say the results suggest that community transmission was established in transportation hubs and nearby large metropolitan areas during the early stages of the pandemic.

They also say that prompt action to limit transmission of the COVID-19 causative agent – severe acute respiratory syndrome coronavirus 2 (SARS-CoV-2) – around these hubs will be essential in stopping the virus from spreading to other regions and countries.

A pre-print version of the research paper is available on the medRxiv* server, while the article undergoes peer review.

The problem with focusing on COVID-19-related deaths alone

Although monitoring the number of deaths related to COVID-19 is key to monitoring the pandemic's burden, the statistics generated can be inaccurate, as well as subject to changes in definition and different testing and reporting policies. 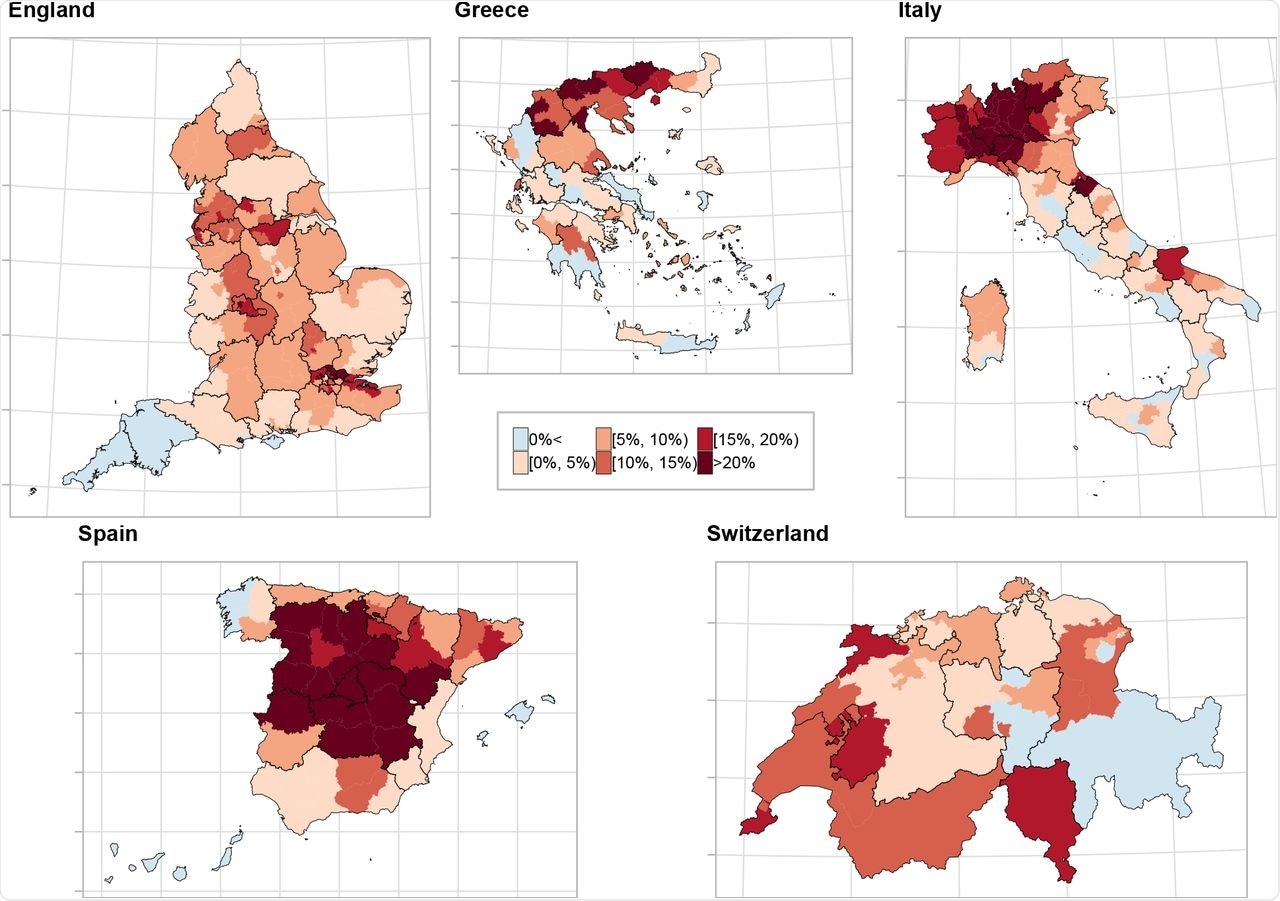 In addition, focusing on COVID-19 deaths alone does not provide insights into the pandemic's indirect effects, such as disrupted health services and the wider economic, social and behavioral changes in the population.

Konstantinoudis and colleagues say that one effective way to quantify the overall mortality burden is to assess excess mortality. This is achieved by using data from before the outbreak to compare the number of all-cause deaths observed during the pandemic with the number of deaths that would have been expected to occur in its absence.

A disproportionate mortality burden at the national level in Europe

Preliminary studies have estimated that the total number of global deaths attributable to the COVID-19 pandemic in 2020 is at least 3 million, with around 37% of these occurring in Europe.

Studies have also reported a disproportionate mortality burden at the national level in Europe, with England, Spain and Italy experiencing the most significant increase in mortality during March and May 2020, and Switzerland experiencing the largest increase between October and December 2020.

The researchers say that further study of these variations could help to improve understanding of SARS-CoV-2 transmission patterns and the effectiveness of the policies and measures implemented to contain the pandemic. 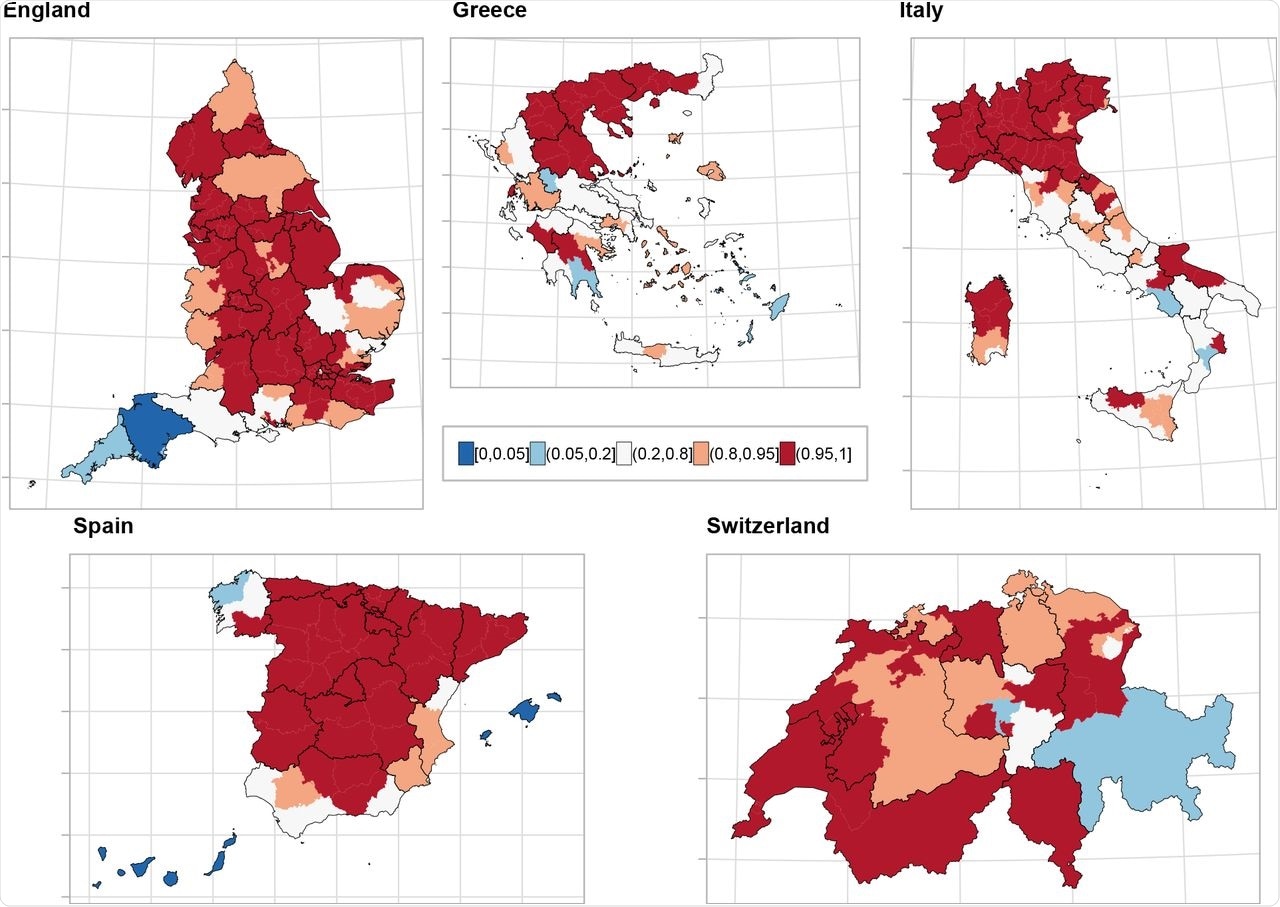 What did the current study involve?

Using data for 2015 to 2019, Konstantinoudis and colleagues applied spatio-temporal models to quantify the expected weekly deaths at the regional level had the COVID-19 pandemic not occurred in England, Greece, Italy, Spain, and Switzerland.

Across all five countries, the regions with the highest excess mortality were Madrid, Castile-La Mancha, and Castile-Leon (Spain) and Lombardia (Italy), ranging from 28% to 33% for males and 25% to 32% for females.

The regions most affected in England, Greece and Switzerland were Outer London and the West Midlands, Eastern, Western and Central Macedonia, and Ticino, with the median excess mortality ranging from 15% to 21% among males and from 18% to 19% among females.

Temporal patterns in excess mortality varied across the countries, with England and Spain experiencing a more significant death toll between March and May 2020, while Switzerland and Greece experienced a larger death toll between November and December 2020. In Italy, the death toll was high during both periods.

What did the authors conclude?

Konstantinoudis and colleagues suggest that several factors may have contributed to the differences in excess mortality that was observed across countries and regions.

However, the mobility of populations across borders and between regions has probably been one of the most important factors, they say.

"The first wave of the pandemic was mainly exogenous, with international airports and transport routes serving as main entry points. Thus, the highest number of excess deaths during the first wave was observed in the areas affected first, i.e., big transit hubs like London, Madrid, Lombardia and Ticino, and Geneva," they write.

From the initial point of introduction, the SARS-CoV-2 virus spread to large nearby metropolitan areas, where community transmission was established, before then increasing exponentially.

"Therefore, rapid action to limit transmission around these hubs is essential to prevent spread to other regions and countries," concludes the team.