Home » Health News » COVID-19 ravages the Navajo Nation, but its people fight back 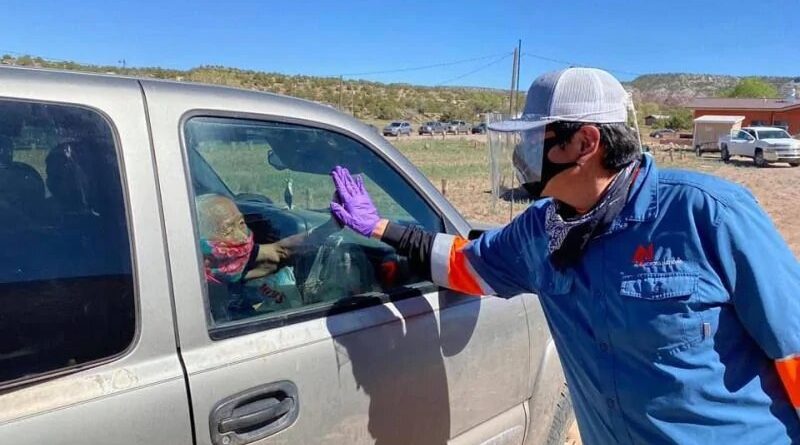 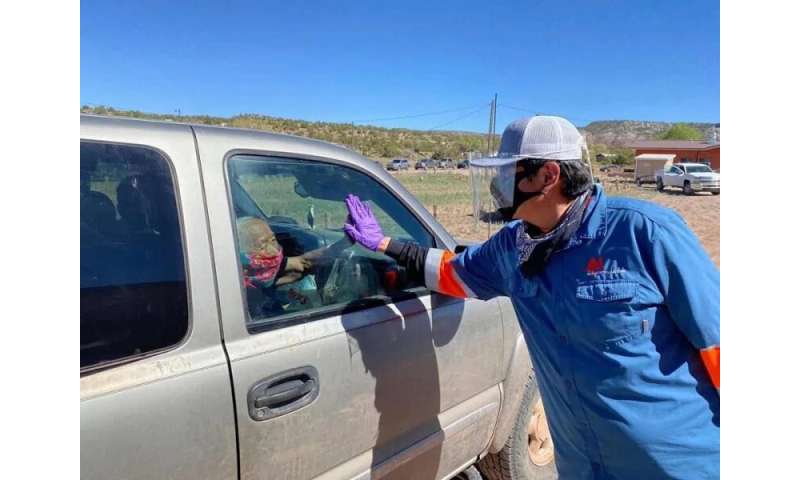 About the size of West Virginia and situated on 27,000 square miles of land spread across Arizona, Utah and New Mexico, Navajo Nation is home to approximately 175,000 people.

It’s also home to a coronavirus infection rate of more than 3.4% and more than 6,000 confirmed cases of COVID-19, according to the Navajo Nation Department of Health.

By comparison, New York state has an infection rate of 1.9%.

“This virus didn’t originate on the Navajo Nation,” said Navajo Nation President Jonathan Nez. “But we got hit pretty hard.”

How did this happen?

One big issue is a lack of infrastructure that was a problem long before the new coronavirus appeared, said Dr. Sriram Shamasunder, an associate professor of medicine at the University of California, San Francisco. He is also the co-founder of UCSF’s Health, Equity, Action, Leadership (HEAL) Initiative, which is partnering with the Navajo Nation to improve conditions.

“I would say that one-third of the population doesn’t have electricity or running water,” he said, and “that means that while ‘shelter-in-place’ may for us be an inconvenience, for many Native Americans it’s an impossibility. If you don’t have a refrigerator to store food, or water to drink, then you’re not going to be able to just stay at home.”

Then there’s hunger. A 2016 “Hunger Report” issued by the Bread for the World Institute noted that grocery stores, convenience stores and fresh produce are either hard to find or unaffordable for many Navajo Nation residents, 44% of whom live below the poverty line. As a result, the U.S. Department of Agriculture has classified all of the Navajo Nation a “food desert.”

There are cultural factors making the Navajo more vulnerable to COVID-19’s spread, as well. Social distancing, for example, is an especially tough concept in this context.

“The Navajo have a very beautiful expansive definition of family, with many generations often living under one roof,” Shamasunder said.

And, Nez added, “We’re social people, just like anybody else. Only when we talk about social people here on the Navajo Nation, and in many tribal communities, it’s just not gathering with your friends or your immediate or extended family, because we also have clan families. And our clans often come together from all parts of the Navajo Nation.”

In fact, Nez said that contact tracing efforts have traced the first cluster of infections back to a single weekend during which a traditional gathering, a church event and a series of birthday parties helped spread the virus.

“Clans came together from every corner of the Navajo Nation, got infected, and then returned home where it then spread like wildfire among small tight-knit rural communities,” he said.

Factors like these make containing COVID-19 an even bigger challenge. According to Nez, an IHS (Indian Health Service) “surge projection” analysis done in March indeed predicted the worst: that Navajo health care facilities would be completely overwhelmed by mid-May.

Those facilities were already among the most underfunded and understaffed in America, however.

“It is evident that the U.S.’s health care system wasn’t equipped to handle a pandemic like COVID-19,” Nez said, “but that is even more so in tribal communities.”

The IHS, operated by the U.S. Department of Health and Human Services, provides health care to 574 tribes throughout the country. “But since its inception, it’s been underfunded,” Nez said.

Shamasunder agreed. “From a funding stand-point, Native American health has never been prioritized. The IHS gets funded at one-third the amount of money per capita as Medicare or the VA,” he said.

Nez added, “That means we don’t have that many emergency beds or intensive care units or doctors,” despite huge ongoing health care needs. Navajos have a 20% diabetes rate and a high incidence of heart disease, he said, and both conditions are also known risk factors for severe COVID-19.

But despite the need, in 2019 the IHS calculated the overall physician vacancy rate at 26%, rising to as high as 40% in some Navajo areas.

Shamasunder and his colleagues at HEAL have been working with the Navajo tribe to help bolster health care infrastructure. Since 2015, 52 HEAL fellows have offered staff support as well as training for local medical workers in hospital and care centers all across Navajo Nation.

And since the pandemic began, HEAL has sent an additional team of 35 volunteer nurses and doctors with particular skills in critical care, intensive care, acute care, hospital medicine and emergency medicine. The Navajo Nation has also welcomed offers of assistance from other well-known aid organizations, including Doctors Without Borders.

Efforts at preventing new cases of COVID-19 have come from the Navajo Nation itself.

“We didn’t roll over and feel sorry for ourselves,” Nez said. “As we say in our language, we are ‘Five-Fingered Beings.’ And we were resilient. We came together to get through this pandemic. We went door-to-door. Even before the first person contracted the virus we issued a public health emergency. And we used our sovereign ability to govern ourselves to issue strict public health orders.”

Those orders included closing Navajo businesses, government offices and visitor access. It meant mandating masks and organizing food and supplies distribution to encourage people to stay at home. It also included some of the strictest lockdown measures in the United States, with mandatory 57-hour shelter-in-place orders each weekend.

Those measures paid off, at least initially. “If we were a state,” said Nez, “we would’ve been one of the last—maybe the 47th or 48th state—to get a COVID-positive case. That’s how hard we pushed.”

But in the end the virus broke through. So far 277 Navajos have died, according to numbers released Friday by the Navajo Nation Department of Health.

Every one of those deaths is a tragedy, Nez said, but he remains proud of the Nation’s efforts against the virus.

“We didn’t have much federal assistance at the beginning,” he said, “but our citizens listened to their doctors, their police officers, their public health experts. So this is not just about how the poor, poor Navajo got hit hard. We were very aggressive. Particularly with testing. We reached out to universities and organizations for test kits. And per capita we surpass all 50 states—and many countries throughout the world—in terms of population tested,” Nez explained.

“So, yes, we’re still seeing our cases rise,” said Nez. “But our health care facilities didn’t get maxed out. We beat the projections. And based on what we’re seeing, we’re flattening out, and I would say that we’ve done a very good job as a Nation. And we hope that trend continues.”

More good news came two weeks ago, in the form of an infusion of COVID-19 relief cash specifically earmarked for the Navajo Nation, with Congressional passage of the Coronavirus Aid, Relief, and Economic Security (CARES) Act in March. Following a drawn-out court battle, the Nation has so far received 60% of the $600 million it’s due, Nez added.

He stressed that despite the Navajo Nation’s immediate need for food, meds and supplies, addressing the “bigger picture” issue of long-standing neglect is what’s key.