Home » Health News » Could this help YOU sleep better? DR MICHAEL MOSLEY put it to the test 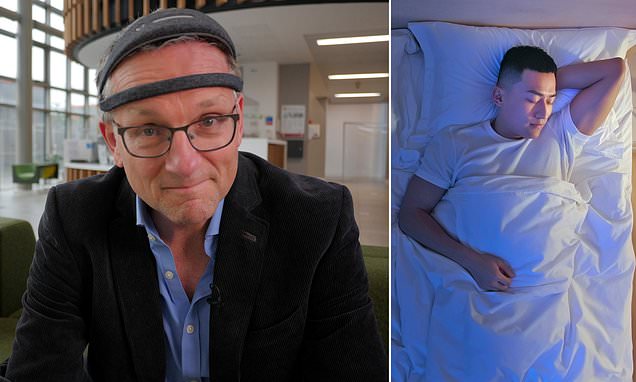 Could this headband help YOU sleep better? DR MICHAEL MOSLEY put it to the test to see if hi-tech ‘sleep engineering’ really is a dream solution to beating insomnia

I love the feeling of waking up after a really good night’s sleep. I just wish it happened more often.

For years I’ve struggled with insomnia, waking up in the middle of the night, and then finding it hard to get back to sleep. And I’m not alone.

We’re in the grip of a sleep crisis, with one in three reporting they often have trouble with their sleep and around a half saying their sleep became worse during the pandemic, reports King’s College London.

I’ve been investigating this in a new documentary for the BBC, looking at why so many of us are seeking help, as well as at the scientific breakthroughs getting us closer than ever to understanding how to get a better night’s sleep. 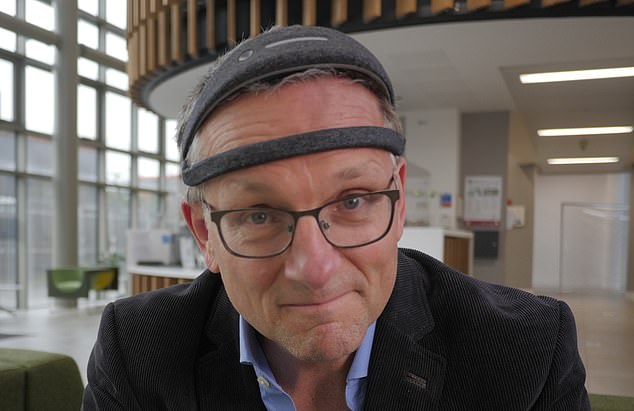 For years I’ve struggled with insomnia, waking up in the middle of the night, and then finding it hard to get back to sleep. And I’m not alone

As part of my investigations, I worked with researchers from the University of Oxford to create what turned out to be the largest online census of Britain’s sleeping habits, involving more than 200,000 people — and here is a sneak preview of what we found and what it might mean for you.

Based on the answers to questions about their sleep habits, each person who filled in the census was given a sleep score from 1 to 10 — over 5 is ‘good’; my score was 2.8.

Our participants reported, on average, getting just six hours and 48 minutes’ sleep a night, well below the recommended seven to nine hours, with people living in the South of the UK having more sleep than those in the North.

Intriguingly, people in Guernsey scored highest for sleep quality, which is just as important as quantity for good health.

O ne of the best ways to measure sleep quality is by calculating your sleep efficiency, the proportion of time you spend in bed actually asleep. If you go to bed at 11pm and get up at 7am, that’s eight hours in bed. But how much of that time were you asleep?

You can use a sleep tracker to estimate this, but I underwent a more accurate assessment, wearing an electroencephalogram (or EEG) on my head to detect my brain waves. This identifies when you’re asleep, and what stage of sleep you’re in. 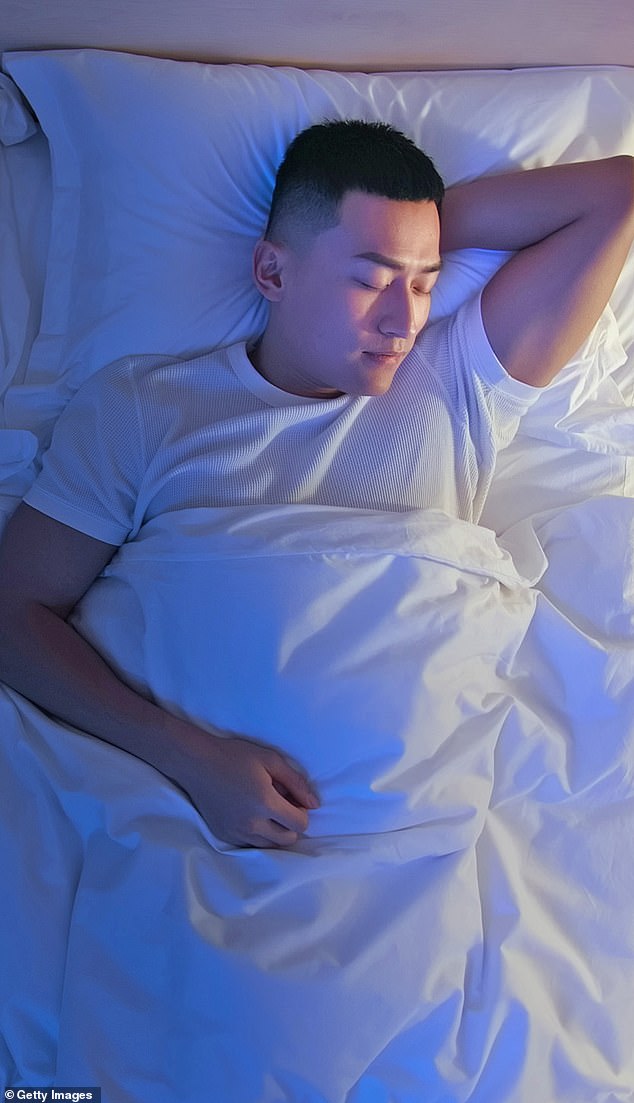 We’re in the grip of a sleep crisis, with one in three reporting they often have trouble with their sleep and around a half saying their sleep became worse during the pandemic, reports King’s College London [File photo]

Normally this is done in a sleep lab, but the Oxford team lent me a portable device, the first time it has been used outside their lab.

There are four stages of sleep. In the first, our brain waves begin to slow down. This is when your eyes start rolling and your head starts to nod. In stage two, the brainwave pattern looks similar to stage one except for short, fast bursts of activity which prepare your brain for learning and memory consolidation.

The third stage is deep sleep, characterised by taller, more spaced out brain waves or ‘slow’ waves. Getting enough deep sleep is not just vital for your memory, it also helps improve the effectiveness of your immune system and it’s when toxins get flushed out of your brain and repair takes place.

Finally there is rapid eye movement (REM) sleep, when our brain waves return to a shorter, faster pattern, similar to being awake except our bodies are paralysed. This is where most of our vivid dreams occur, and it’s important for our emotional wellbeing.

It’s essential that you get both enough sleep, and enough of these individual stages.

My EEG readings showed I have relatively poor sleep efficiency, actually sleeping for only 75 per cent of the time I’m in bed (ideally it should be over 80 per cent). And I seem to be short on deep sleep, which makes up just 12 per cent of my sleep (the ideal is 20 per cent).

There are lots of tried and tested techniques for improving sleep (and getting more deep sleep), including going to bed and getting up at a regular time; avoiding bright lights and social media before bedtime; and following the ‘quarter of an hour rule’ (get out of bed if you don’t fall asleep within 15 minutes or if you wake up and can’t get back to sleep). This helps retrain your brain to associate ‘bed’ with sleep (and sex) and nothing else.

I’m already doing most of these things, and more. As well as regular early morning exercise outdoors (exposure to morning light helps reset the body’s internal clock) and eating a Mediterranean-style diet (rich in fibre and low in sugar, it has been shown to improve sleep quality). I also avoid caffeine after 10am and rarely drink alcohol.

But I was particularly taken by a cutting edge bit of tech I came across, which is being tested by researchers at the Brain Research Imaging Centre at Cardiff University. It consists of a headband with electrodes that identifies when you’re in deep sleep (when the brain produces long, slow waves); it then makes a quiet noise near the peak of a wave, and this effectively stimulates your brain to make more slow, deep waves.

So far the researchers have found that the headband works well in young people, but when I gave it a go, it didn’t have much impact — which didn’t surprise neuroscientist Professor Penny Lewis, who runs the research team.

She told me that in ‘older people’ (I’m 65), ‘there is a response, but it’s tiny’. That’s because with age these slow waves are not as big or as effective, which means that the target that the noise soundwaves are trying to hit is smaller and easily missed.

As for me, despite my EEG results, I feel like I am now sleeping better — the key for me is trying not to worry about it, and using breathing techniques and mindfulness certainly helps.

I know running is good for me but I hate it — it’s something I do with gritted teeth. But perhaps I should try to smile.

Researchers from Ulster University have found that smiling makes the run easier and more efficient. In their study they fitted 24 regular runners with masks to measure how much oxygen they consumed while doing six-minute runs on a treadmill — getting them to smile, frown, or run as normal.

To their surprise the runners used 3 per cent less energy (measured by oxygen uptake) when smiling than when frowning.

The runners said they also found running easier when smiling.

One theory is that smiling makes you feel more relaxed, which helps you run more efficiently and also apparently feel better about the whole thing.

Is this a coincidence? Apparently not. A study by Newcastle University, based on the family trees of half a million people, found that if you have more brothers than sisters, you’re more likely to have sons. And vice versa. At least, that’s if you’re a man.

So what is going on? Sperm contains either X or Y chromosomes — if a sperm containing an ‘X’ combines with a woman’s egg (which always contains an X chromosome) then you get a girl (XX); or if a Y-chromosome sperm combines with an egg, it’s a boy (XY). The researchers think there’s a gene — or genes — that determine whether a man produces more X or Y sperm.

This could help explain an odd phenomenon after both World Wars. Normally slightly more boys are born — there are around 105 males born for every 100 females in the UK.

The reason you don’t see a lot more men than women is because boys are more likely to die in childhood and at almost every other stage of life — as well as being more reckless, men tend to have weaker immune systems. But after both World Wars there was a particularly big boom in boy births.

This is because if you’re a father with lots of sons who go off to war, there’s a better chance that at least one of your sons will come home compared to a father with only one son. Any surviving sons would inherit the tendency to have sons — so, for a while, you get a male baby boom.

At some point, when the balance of men to women has corrected, things go back to normal. Which shows you how clever Nature is. I’ve warned my sons to expect boys…