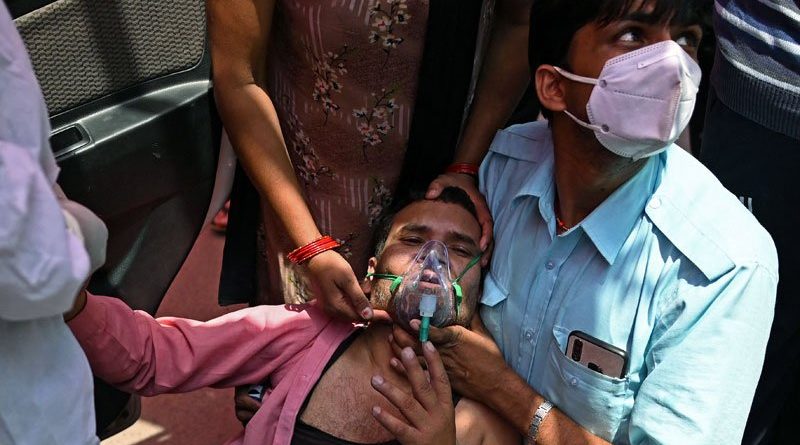 Reports out of India describe a dire COVID-19 situation unfolding, with record-breaking daily case numbers, oxygen for ventilators running scarce, and a transmission rate that points to things getting worse before they get better.

Could such a scenario play out in the United States in the future?

Experts generally agree the United States is in a better position with the recent gains in COVID-19 vaccination. However, there are several unknowns: Will the slowing pace of immunizations have an effect? What about variants? Will the relaxing of public health measures in some states play a role?

One thing is certain: India reported its sixth consecutive day with more than 300,000 new COVID-19 cases on April 27. Furthermore, the official death toll of 198,000 is likely an undercount, based on a test positivity rate averaging about 20% nationwide.

The new case reports coming out of India are likely a “gross underestimate,” Ashish Jha, MD, MPH, dean of the Brown University School of Public Health in Providence, Rhode Island, said during an April 27 media briefing.

The total death number of almost 200,000 is, likewise, “clearly an underestimate,” Jha said. “The best estimates it is 10 times that.”

“The virus is swallowing our city’s people like a monster,” Bhopal city official Mamtesh Sharma is widely quoted in the media as saying.

“There is no doubt that a humanitarian emergency is unfolding in India right now,” Michael Head, PhD, senior research fellow in global health at the University of Southampton in the United Kingdom, said. “The stories of a collapsing health system are numerous, with reports of a lack of oxygen for hospitalized patients and bodies burning on pyres in the streets.”

The mortality rate in India is not keeping up with the steep rise in new cases, a lonely bright spot in the figures. The death rate often lags behind infections by several weeks, so the situation could change.

The United States initially pledged to send raw material for vaccines to India, and later added it will ship 60 million doses of the AstraZeneca vaccine abroad to aid the unfolding catastrophe in India and other countries. India reports 14 million cumulative cases, second only to the 32 million reported so far in the United States.

The 0.2 million daily rate is more than double what the country experienced during the first peak. “The data suggests that at present the virus is much more infectious than the first wave, but the number of daily deaths per infection is lower,” they write.

When asked if such a surge could unfold in the United States, Kartik Cherabuddi, MD, told Medscape Medical News, “We have experienced this in Michigan and Ontario recently so we must not let our guard down.”

Vaccinations are the most effective strategy to prevent a future surge, added Cherabuddi, associate professor of medicine in the Division of Infectious Diseases and Global Medicine, University of Florida College of Medicine, Gainesville. “We have had a great response so far but there are signs of demand slowing down. We must advocate to remove all barriers to vaccination.”

The US vaccination slowdown is not surprising, Jha said. “I think the seven-day moving average above 3 million is gone. That number will continue to decline.”

He emphasized that slowing in vaccinations is not a failure. “It’s exactly what we expected — the vaccine-avid people are done. Getting everyone else vaccinated is slower.”

Cherabuddi predicted that the chances are greater that the United States will see smaller, regional outbreaks versus another nationwide surge.

“The availability of vaccines in the United States is certainly an advantage. However, although more than a quarter of the population is fully vaccinated, it’s possible that if we are not successful in combatting misinformation on vaccines, large parts of the population will remain unvaccinated. This could limit our ability to control the pandemic and lead to ongoing clusters,” Tom Frieden, MD, MPH, former CDC director and president and CEO of Resolve to Save Lives, told Medscape Medical News.

“The contrast with the US is almost jarring,” Jha said. The United States is at the tail end of a “mini fourth wave.” For the first time in a month, new cases are less than 60,000 per day. He expects this overall decline in new cases to continue, and, if the United States cannot get to zero cases, at least a more manageable 10,000 per day nationwide would be welcome.

Jha agreed that nationwide surges are unlikely. However, “I worry about pockets in the US.” For example, he is particularly concerned about five states with low vaccination rates that could see a summer surge when people move indoors into air conditioning: Alabama, Arkansas, Georgia, Louisiana, and Mississippi.

Ranjan and colleagues point to the B.1.617 variant of SARS-CoV-2, a “highly infectious double mutant variation” of SARS-CoV-2, “negligent behavior” of the population, and the relaxation of interventions in India. They note that more research is needed to determine if infections associated with B.1.617 are more or less severe than wild-type virus.

Jha said that the B.1.1.7 variant, first identified in the United Kingdom, is playing a larger role in India at the moment than other variants of concern.

“The situation in India shows the need to both keep variants at bay with masks, distancing, and strategic closures, and also to ramp up vaccine manufacturing globally,” Frieden said.

“The second wave in India looks much more precarious than the first wave and the situation could quickly get out of control unless stringent measures are taken,” Ranjan and colleagues write. Vaccinations are essential, they add, but “considering the large population of India and the current spread of the virus mutants into remote locations of India, these strategies may not be sufficient to stem the spread of the virus.”

“It is in our individual and collective interest to scale up vaccination around the world as rapidly as possible, with outreach to hesitant and at-risk communities, and to tamp down spread as effectively as possible with masking and distancing, especially indoors,” Frieden said.

“We can’t be blinded by the light at the end of the tunnel in the United States,” he added. “India’s surge is a reminder that the virus is learning about us and adapting faster than we are learning about and adapting to it, and that COVID-19 is an ongoing and increasing risk.”

Interestingly, although India is the world’s biggest producer of vaccines, “it has not had the biggest roll out of vaccination, meaning that only a relatively small 9% of people are protected so far,” Martin Hibberd, PhD, professor of Emerging Infectious Disease at London School of Hygiene & Tropical Medicine, told the Science Media Centre in the United Kingdom.

In their study, Ranjan and colleagues calculated how likely each infected person is to transmit the virus to another, known as the reproduction number (Rt). When the Rt is greater than 1, each person is likely to spread the virus to more than one other individual, for example. The current Rt in India is about 1.37, up from 1.09 in September 2020.

Another measure, the case fatality rate (CFR), has trended downward from 3.5% during the first peak in India in April 2020 to 1.2% 1 year later. “The decline in the CFR curve suggests a silver lining of a relatively less fatal mutant,” Ranjan and colleagues write. “However, considering an exponential increase of cases at a very high rate, it is expected that soon the healthcare facilities will be fully throttled resulting in the unavailability of hospital beds and ventilators to those in critical needs. This may result in an increase in CFR.”

India “Not Out of the Woods”

Based on this model, the researchers predict that the peak of the current second wave will occur in mid-May, when new cases are estimated to reach 0.36 million.

“While a lot of focus, appropriately, right now is on cities and large towns, we have to act immediately to prevent accelerated spread to smaller towns and villages where the majority of the population lives,” said Cherabuddi, who is also affiliated with India COVID SOS, a volunteer group of scientists, clinicians, engineers, policy makers, and epidemiologists worldwide supporting the fight against COVID-19 in India.

“The next 4 to 6 weeks will be very difficult for India,” Jha said. “In no way is India near out of the woods.”

“It is really important for us to remember this is a global pandemic,” he added. “While the virus is running wild anywhere, we are all at risk.”

One likely scenario over the next year or 2 is “we are going to see the US, Europe and a few other countries in reasonably good shape — putting out fires here and there because of outbreaks — and much of the world aflame with high infection rates,” Jha said. “That is not a future any of us want.”

Jha, Head, Ranjan, Frieden, and Hibberd have disclosed no relevant financial relationships. The study preprint was supported in part by a SERB MATRICS project. MedRxiv included a caveat that the preprint is not peer-reviewed and should not be used to guide clinical practice.

Damian McNamara is a staff journalist based in Miami. He covers a wide range of medical specialties, including infectious diseases, gastroenterology, and neurology. Follow Damian on Twitter: @MedReporter.