Home » Health News » Coronavirus: Physical distancing may help ease burden on hospitals, but only to a point 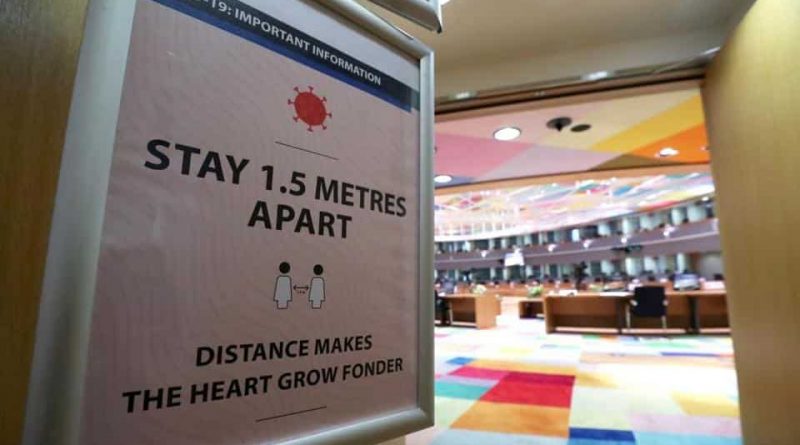 Scientists have found that longer periods of social distancing alone are not successful when it comes to slowing COVID-19 spread, an advance which may help make better decisions in countries where a second wave of the pandemic is expected.

“Conventional wisdom was, the more intense and long-term the social distancing, the more you will curb the disease spread,” said Rajan Chakrabarty, a co-author of the study from Washington University in St. Louis in the US.

According to the study, published in the journal Chaos, any strategy that involves social distancing requires other steps be taken in tandem.

“But that is true if you have social distancing implemented with contact tracing, isolation and testing. Without those, you will give rise to a second wave,” Chakrabarty said.

Payton Beeler, another co-author of the study, noted that if social distancing is the only measure taken, it must be implemented extremely carefully in order for its benefits to be fully realized.

Their epidemiological model used data gathered by Johns Hopkins University in the US between March 18 and March 29, a period marked by a rapid surge in COVID-19 cases and the onset of social distancing in most US states. Calibrating the model using these datasets allowed the authors to analyse unbiased results that had not yet been affected by large-scale distancing in place, they said.

The model also included details on how much people of different age groups interact, and how that affects the spread of transmission.

Over the short-term, more distancing and less hospital demand go hand in hand, the scientists said, adding that this is only up to two weeks. After that, they said the time spent distancing does not benefit hospital demand as much. Society would have to increase social distancing time exponentially in order to see a linear decrease in hospital demand, the researchers noted.

They said this leads to diminishing returns. Society would see smaller and smaller benefits to hospital demand the longer it spent social distancing, the scientists explained.

According to the researchers, if social distancing “alone” is to be implemented longer than two weeks, a moderate shut down, say between 50-70 per cent, could be more effective for the society than a stricter complete shut-down in yielding the largest reduction in medical demands.

Another strategy for flattening the curve involves acting intermittently, alternating between strict social distancing and no distancing to alleviate the strain on hospitals, the study noted. According to the model, the most efficient distancing- to- no-distancing ratio is five to one, meaning one day of no distancing for every five days at home. Had society acted in this way, the researchers said the hospital burden could have been reduced by 80 per cent. “Bending the curve using social distancing alone is analogous to slowing down the front of a raging wildfire without extinguishing the glowing embers,” said Chakrabarty.

“They are waiting to start their own fires once the wind carries them away,” he said, adding however that his team’s model cannot inform strategies going forward as it used data collected in March. But Chakrabarty added that it may be able to inform our actions if we find ourselves in a similar situation in the future.

“Next time, we must act faster, and be more aggressive when it comes to contact tracing and testing and isolation,” Chakrabarty said.