“Do you reckon it’s easier to jog while carrying a bottle of Pinot in a backpack or in your hand?”

This is me, messaging the friend whose house I’d agreed to “run” to for dinner, and realising I’d probably poured myself too big a glass. 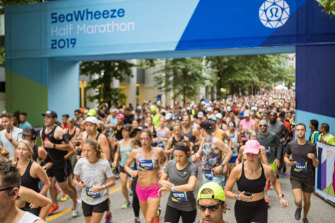 How easily can a non-runner train for a half-marathon?

For as long as I can remember, I have said I am “not a runner” as if it was stamped onto my birth certificate. I played a bit of social sport, sure. But I had never considered doing a City2Surf or even used a treadmill. Running, I believed unwaveringly, was for other people.

Yet, this is the time of year that our Facebook feeds and Sunday papers are filled with pictures of those people in activewear happily crossing finish lines and biting medals. They walk among us. They organise fun run teams in our departments' Slack channels and turn up sore and exhausted to our afternoon barbecues. They can't be so different from you or I, can they? With an invite to run the Lululemon Seawheeze Half-Marathon around Vancouver, I had two months to find out.

If you’re reading this because you want a recommendation for a single program you can buy, or a list of targets to reach by certain dates to be able to confidently run a half-marathon after just a couple of months' prep, I’m afraid you’re in the wrong place. To be blunt, being 25 with no existing injuries was probably the most useful tool in my kit, but lots of other things – trainers, gear, tech – played a role.

My training started with a friend in the park outside his house. We jogged incredibly slowly for two minutes then walked for one minute five times and I was spent. We then did some short sprints and my fitness reserves were in the red. On the second attempt of our jogging and walking intervals, I declared aerobic bankruptcy.

Three days later came the wine incident, and I realised opportunities to run would not just crop up around my everyday life.

Friends had recommended I use the "Couch to 5k" program. However I knew that if I followed the app's eight-week regime to time, I would only be able to run 5 kilometres a week before the race. No worries, I thought, I've crammed for an exam before.

I skipped the first week (running for minute-long intervals seemed soft) and did the second and third weeks in double sessions, skipping the rest days. Shockingly, this didn’t work very well and, by the time the pleasant voice in my earbuds was encouraging me to run for five minutes without a rest, I had nowhere near the cardiovascular fitness required. (“You’re doing great!” she would exclaim as I sat hunched over on a bench, watching the timer run out from 3:30.)

This is where the help came in.

According to Todd Liubinskas and Trent Knox from the 440 running club, with locations across Sydney, the most important thing a new runner can learn is how to breathe properly. They recommend two inhalations for every exhalation at your running pace and deep, slow breaths when the going gets tough so you can recover while still moving.

“We want you to be able to slow your heart rate while you jog,” Liubinskas explained on our first bi-weekly running session, confident that I could run a half-marathon in what was now less than two months' time, provided I prioritised it. And, no, trying to fit in a run on the way to a friend's house for dinner with a bottle of Jacob's Creek in your hand is not prioritising it.

At Liubinskas' request, my old, treadless, Nike Airs had to go ("you are just not doing yourself any favours"). I traded them in for Nike Pegasus Zooms and started to feel much lighter, even though the legs attached to the shoes were heavy as lead. He also recommended I get a smartwatch so I could really track my progress and fitness. I … didn't do this. But I did download a free running app, Strava, which did a similar thing on my phone.

In addition to the running, I also started pilates-based training with Bondi instructor Kirsten Scott, who said the biggest areas runners need to be aware of strengthening are their back, core and glutes. My core was particularly weak, she said, promptly signing me up for bi-weekly ab workouts for the next seven weeks.

I asked her if she thought this race was an achievable goal.

“Yeah, absolutely. You’ve got to prioritise it, though. This is your life now.”

Across my training I did a mix of sprints training (apparently for anaerobic fitness, although I think also for the amusement of passersby), hill runs (similarly) and longer runs. My entire training plan – and race plan – was interval-based. This was not about running 21km. It was about running for three minutes and jogging for one. Given I was only going to get to run 14km prior to the race, it seemed likely those final few kilometres would look a bit more like jogging for three minutes and walking for one. I only managed to run 5km without any form of stopping (for a traffic light, or just a small cry) a week out from the big day.

This is the time of year that our Facebook feeds and Sunday papers are filled with pictures of those people in activewear happily crossing finish lines and biting medals.

Which brought me to a weirdly philosophical state which I considered omitting from this article but I think is actually worth a mention: What is running?

Walking, as an action, is extremely well defined. In race walking at the Olympics, one foot must be on the ground at all times, and your supporting leg has to be straight. Running? At the 2016 Olympics, Shaunae Miller of the Bahamas won the women's 400m by diving across the finish line.

How much of this race will I need to literally "run" to say I've run it?

The answer, my fellow non-runners might be surprised to learn, is … honestly not a huge amount. People I spoke to who had run half-marathons (or marathons) seemed to think somewhere between 50 per cent (unbelievably to me, the majority opinion) and 80 per cent at a running pace was the benchmark.

“You’re a nutcase,” said Christian Barton, a clinical physiotherapist and researcher at La Trobe University, when I called a week before the race to receive the professional advice I quite clearly sought at a point where it wouldn't become an excuse for me to pull out.

I asked what the consequences of doing this could be. At the four-week point, I had developed a tight Achilles and would need to “pull over” to stretch it out 10 minutes into a session (you could set your watch by it), but it appeared to subside after a couple of weeks.

“Muscle pain is normal if you’re doing a new exercise,” Barton said, adding that the problem is if the pain appears to get worse instead of better (as your muscle gets stronger) or if the pain is in a joint.

For Barton, the biggest concern was injury, although he said the research is limited as to whether any particular technique will help me prevent this on this timeframe: “The body likes slow change and not fast change; the best way to reduce your chance of injury is to give yourself lots of time and not do crazy things like you’re doing.”

With this in mind, I lucked out by changing my shoes early on in the experiment; any later and Barton thought, even though my old ones were a disaster, the new ones probably would have made me more injury-prone.

For me, as we approach the five-week mark and half of my office appears to have some sort of lurgy, the biggest concern is illness, and by week seven I am struck with a cold. Unfortunately, there’s no concrete evidence as to what one should do when sick but needing to also run a total of about 25km over four sessions in a week.

According to Jacinta Brinsley, exercise physiologist at the University of South Australia, the increased respiratory rate and core temperature you get with exercise can get a great way to “hit reset for your body”. However, it’s about listening to your body: you need to be over your initial sickness.

I took a few days off. A week away from the race and I honestly wasn't feeling great; I was worried I’d lost whatever limited ability I had managed to build up.

I do a 14km, the longest distance I’ll attempt before the half. The first 7km, my usual weekend distance, is fine. The last seven are a struggle. The thought of adding an extra 7km on the end of that seems impossible. Yet, a week later, I’m pounding the pavement around Vancouver’s seawall, trying to do exactly that.

When I started this journey, lots of running types would say to me: “Oh, you can totally do it. It’s all mental.” I didn’t believe them (“I think running 21km is probably a bit physical,” I would retort). But as I keep trying to move at an OK pace – a shuffle-walk – towards the finish line, I come to realise what they mean.

Two months earlier, the thing stopping me from running more than 200m was my lungs. A month earlier, the things stopping me from running more than 3km were my tight calves. As I entered the 15th kilometre of the race, knowing there was only another hour before I could never run another step in my life, neither of these things seemed to be stopping me. I was out of breath but not gasping for air. My legs hurt but I didn't need to stretch it out.

What was tired, however, was my mind.

I try counting my breaths, forcing myself to make it to the end of a song and, admittedly, spend a fair bit of the penultimate half-hour doing a quick walk. (50 per cent counts, survey says!)

“You just need to keep telling yourself two things,” Liubinskas had told me in a text message days earlier. “‘Feeling fresh’ and ‘the hard work has already been done’.” The first was a lie my body didn’t believe, but the second did help.

Of course the end eventually came – I inexplicably sprinted the last 100m of the race, overtaking people who probably crossed the start line well after I did just for a cheap, bullying thrill – and, medal around my neck and 14 minutes under my (admittedly probably too modest) goal time, I took that social media photo for my friends to wake up to on their hungover Sunday morning, just like I used to.

The writer travelled to Vancouver as a guest of Lululemon.