Home » Health News » Can we talk about the mental health toll of binge-watching?

The way we consume media has changed dramatically over the past five years. Long gone are the days of waiting week by week to find out what happens next on your favourite show – now streaming services like Stan, Netflix, Amazon Prime and other platforms have you covered, dropping entire eight-episode series to enjoy wherever you hang your hat.

This shift in the way we watch has created a cultural ripple, from the discourse on Twitter to good ole fashioned water-cooler talk. For every "did you catch the latest episode of The Good Place'?" there's a, "Yeah, I've finished the whole series! How far along are you?" But it's not a format that suits everyone. 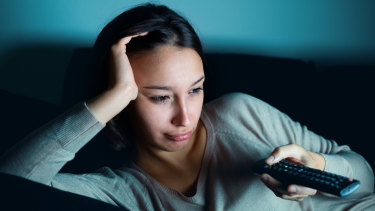 Binge-watching through streaming services and other platforms has changed the way we watch TV.Credit:Shutterstock

The amount of viewing we have to do is exhausting

For those struggling with mental health problems, chronic illnesses, processing issues or sheer tiredness, keeping up with streaming platforms is a lot.

I'm one of many people that loves television but finds it difficult to sit through a 30-minute episode without drifting. When my anxiety disorder leaves me mentally fried on a day-to-day basis, settling down and dedicating a good slice of your time for a single episode is a challenge.

Despite making attempts to really "digest" what I'm watching – like switching on subtitles, which helps me process things, and putting enough time aside – I usually peter out around 10 minutes in. Which sucks, because it feels like I'm the only person on the planet who hasn't actually seen the end of Stranger Things season three in real time, not just through lengthy tweets detailing every spoiler.

It's a strangely isolating sensation to not be able to share your love of something simply because you're not fast enough.

Sam Barakat, who is a mental health first aid instructor and campaigner, struggles similarly. After having issues with depression, she found herself experiencing problems with concentration and memory, which impacted her enjoyment of watching shows.

"My concentration, especially at the times I usually watch TV (in the hours before I go to bed), is so bad that most of the time when I'm watching an hour-long show, I pause it once or multiple times to stop and do something else," she says. "I have only ever binge-watched once: when season three of 13 Reasons Why came out, due to how many cliffhangers there were in season one, which took me two weeks to watch."

For her, watching one episode can be a struggle, so binge-watching is equally, if not more, difficult.

"Due to a lack of motivation after work, I have been unable to watch the next series, which means I can't engage in conversations on social media about it… everyone has finished the season, meaning it's not as juicy of a discussion. I have seen so many spoilers on social media – both accidentally and intentionally."

Although it isn't strictly necessary to cancel all weekend plans and box off time for whatever series Netflix has deigned to drop on us, it can feel like there's a societal expectation to be "on top of" your viewing game, whether you struggle with watching or not.

Eric Francisco is an entertainment journalist. For him, watching a great deal of TV is very much part of the job description. However, he feels that this pressure can make the medium "tiresome" and worries that the shift to binge-watching causes a lot more problems than it solves.

"The thought of TV – hour-long, serial narratives that are important – just feels daunting. And then, there's the fatigue of choice… there are simply too many bloody options that as a consumer it just feels like I have to glue myself to the couch just to be up to date."

He's also noticed how TV shows are being written to support streaming and binge-watching. "One of the most fascinating shifts has been that TV has to be like movies," he says. "The narratives flow less like episodes and more like chapters in a 10- to 12-hour movie. That's great for the binge experience but terrible for the "I need to live my life experience."

The binge-watch model is built for the convenience of the many and the accessibility of the masses, and despite platforms feeding us with more and more shows, technically no one is forcing us to watch 10 episodes at a time.

The pressure to keep up is largely societal

It's a shame, considering so much of the enjoyment that comes with watching a series is discussing it with friends or even just the early-morning work icebreaker that says, "Daenerys, right? Who'd have seen that one coming?"

However, the amount of television on offer can be used to help with some of the root causes of burnout.

Psychotherapist Helena Lewis says that while keeping up with a series is not a necessary part of her therapy practice, it certainly can help build connections. Shows can help people find common ground and can be good conversation starters or ways to explain issues, through scenes, themes and characters.

"All these factors can be useful 'openers' for clients to communicate and share their feelings," she says. "Programs, or series, can also be useful in pulling out metaphors for the client to think about or relate to, and for some clients, this is a safer starting point."

Thanks to social media, as well, production companies are paying more attention to portrayals, such as Crazy Ex-Girlfriend, Euphoria, BoJack Horseman,  and even the divisive 13 Reasons Why – a show that finally removed Hannah's controversial scene earlier this year after heavy backlash from viewers, parent groups and mental health professionals.

"Many series are starting to highlight mental health in a more realistic way and watching can help therapists understand how popular culture is perceiving mental health," she notes.

"It, therefore, gives an indication of the kind of messages that clients may be receiving, which in turn feeds their perception of their own mental health. As program producers and influencers increasingly take on this subject, hopefully, people are able to relate to how mental health is portrayed and to use this in a helpful way."

There's no way that we can collectively stop spoilers leaking onto the timeline. Or force ourselves away from the millionth Fleabag op-ed when we've only just been introduced to Hot Priest. Binge-watching, or the way we devour shows to spit them out again, is not going to stop anytime soon.

What those of us who are slowly chewing through episodes need to remember, is that we're not alone

"I actually miss watching shows weekly," says Eric. "It gives us time to digest, think, discuss with others… the binge model means we're racing to watch these shows through a single weekend because we'll fall behind others come Monday morning. And then we freaking forget the show!"

Even I often feel like the only person on the planet who doesn't know what the hell Succession is all about. I love television dearly, but I'm learning that I'm not obliged to sacrifice my time and mental energy being dragged along for another season of a show everyone else is clamouring for.

Until the binge-watch model shifts, it's likely that I'll have to avoid the water-cooler for a while and steer clear of spoilers as best as I can. I will finish Stranger Things season three, in my own sweet time.