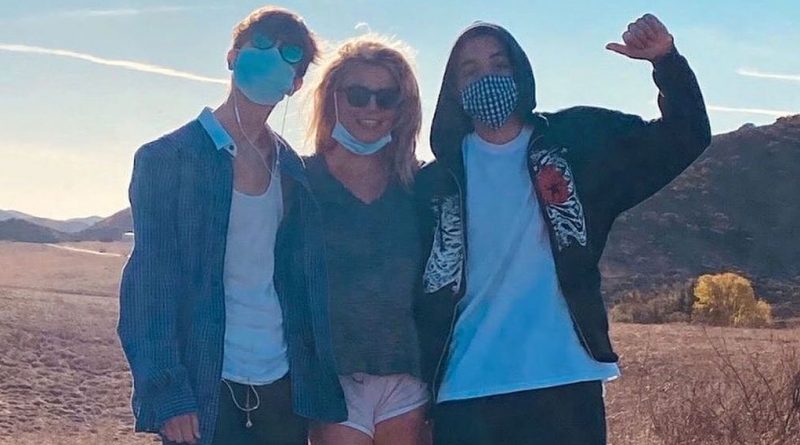 All grown up! Britney Spears posted a rare photo with her teenage sons, Sean Preston and Jayden, on Monday, March 1.

“It’s so crazy how time flies …. My boys are so big now !!!!” the Grammy winner, 39, wrote via Instagram alongside a picture of herself, Preston, 15, and Jayden, 14, wearing face masks while hiking in California amid the COVID-19 pandemic. “I know … I know … it’s very hard for any mama especially a mama with boys seeing them grow up so fast !!!! Talk about enough to make you go to your knees … GEEZ !!!!”

Spears told her 28.5 million Instagram followers that she is “extremely lucky because my two babies are such gentleman and so kind.” She then joked that she “must have done something right.”

The “Slumber Party” singer used to share photos with her teens more often, but she has had less time with them since her ex-husband Kevin Federline altered their custody arrangement in August 2019.

“I haven’t posted pictures of them for some time cause they’re at the age where they want to express their own identities and I totally get it …. But I went out of my way to make this cool edit and guess what …. They’re finally letting me post it !!!” Spears wrote on Monday. “Now I don’t feel left out anymore and I’m gonna go celebrate …. Oh s–t I guess cool moms don’t do that … Ok I’ll just read a book instead !!!!”

Her boyfriend of four years, Sam Asghari, commented on the post, “Lioness with her Cubs.”

After marrying Federline, now 42, in October 2004, the pop star gave birth to Preston in September 2005 and Jayden in September 2006. Just three weeks after Jayden’s arrival, Spears filed for divorce from the DJ. They finalized the paperwork in July 2007.

Earlier on Monday, a source exclusively told Us Weekly that Spears sees her sons “periodically” but does not have a “set schedule” with Federline.

“They are teenagers now and want to be with their friends, not their parents,” the insider explained. “It’s nothing against Britney; they love and idolize her, and Kevin trusts her. It’s just that they’re getting older, so when they’re not at their main home with Kevin, they’re usually out doing things with friends.”

The source called Preston and Jayden “very normal boys who just so happen to be the sons of one of the biggest pop stars in history,” telling Us, “They like sports and being outdoors. They also love music, like their mom, though they usually listen to rap and EDM, like their dad. Preston in particular is a big fan of synthesizers and likes to toy around with deejaying in his spare time.”