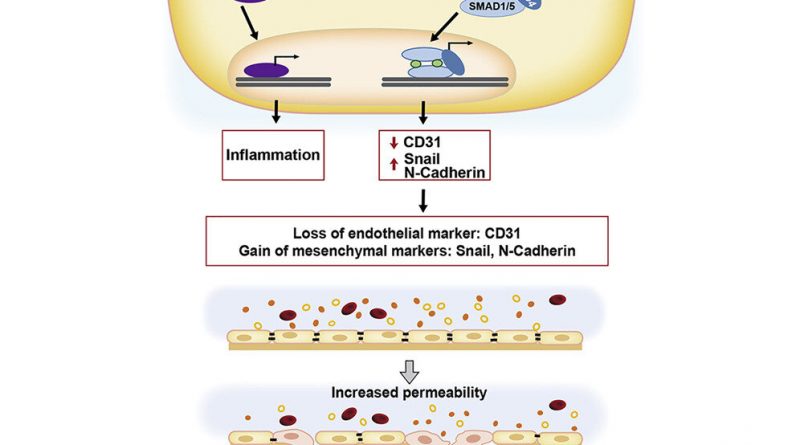 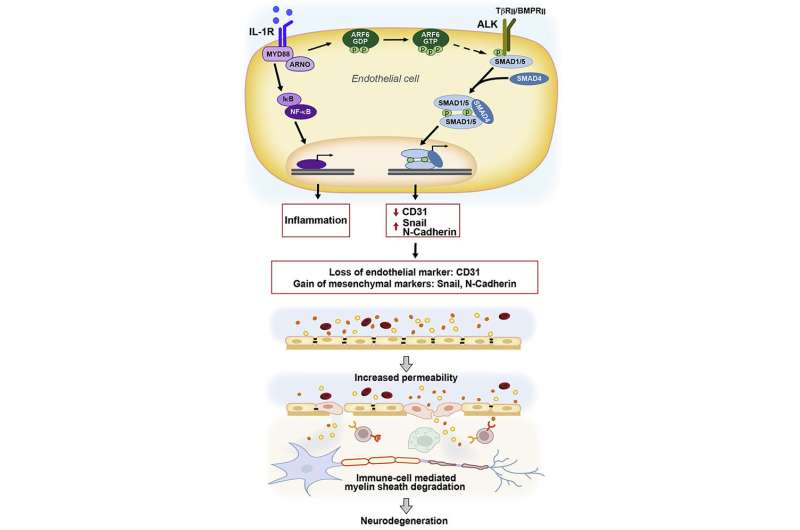 Millions of people worldwide are living with multiple sclerosis (MS), a disease in which the immune system attacks cells in the central nervous system (CNS), causing unpredictable symptoms that can include tremors, weakness, vision problems, and fatigue.

Treatments for MS aim to protect neurons by reining in the immune system. This slows progression of the disease, but it also leaves patients more vulnerable to infection.

Now, a discovery from scientists at University of Utah Health suggests an alternative therapeutic strategy: restabilizing a natural barricade—the blood-CNS barrier—that breaks down in MS. Ordinarily, this barrier keeps damaging molecules away from neurons.

Multiple sclerosis develops when wayward immune cells destroy the protective sheath that surrounds neurons. Its exact cause is unknown, but it is clear that inflammation helps drive the disease. That inflammation worsens when, early in the disease, the protective blood-CNS barrier begins to break down, allowing fluids and proteins in the blood to leak out of blood vessels and enter the brain and spinal cord.

“We think the breakdown of the blood-CNS barrier is causing a real problem,” says Shannon Odelberg, Ph.D., research associate professor of Internal Medicine. “So, if you can stabilize the vasculature and reduce that leak, you can reduce those proteins that do the damage, and you can reduce the inflammatory response.”

In the journal Neuron, Odelberg, Professor of Internal Medicine Weiquan (Wendy) Zhu, Ph.D., and colleagues report that in mice with an MS-like condition, the blood-CNS barrier becomes leaky when the cells that line blood vessels’ interior walls transform and lose the ability to assemble themselves into a tight-knit layer. They found they could restore the barrier by reversing this transformation. Once the barrier was repaired and inflammation-triggering molecules from the blood could no longer enter the CNS, damaged neurons began to recover, and the animals’ symptoms diminished.

Zhu says researchers are just beginning to recognize how changes in the blood vessels that supply the CNS contribute to neurodegeneration that is characteristic of MS—but evidence is accumulating that breakdown of the blood-CNS barrier plays a role in a number of conditions. Deterioration of the barrier has also been observed in studies of Alzheimer’s disease, Parkinson’s disease, and Huntington’s disease.

Zhu and Odelberg knew that when the blood-CNS barrier breaks down, the cells that line blood vessels walls have often lost the physical junctions that usually link them tightly to their neighbors to keep harmful molecules from slipping between them, much like the linked arms in a game of red rover stop advancing runners. But when postdoctoral researcher Zhonglou Sun, Ph.D., took a close look at the CNS in mice with the MS-like condition, he discovered that the change to those cells went beyond the loss of these structural connections. The cells appeared to have taken on a new identity.

Sun discovered that some of the cells were no longer true endothelial cells, the type of cells that line healthy blood vessels. Instead, they had characteristics of mesenchymal cells, which do not produce the hinge-like proteins that link endothelial cells together. “Normally, they’re really held tightly together to keep this fluid in, but they lose those tight junctions when they convert to a mesenchymal cell type, allowing the fluid and the proteins to pass into the tissue where damage can occur,” Odelberg explains.

With further experiments, the team was able to trace how cellular signals that promote inflammation also trigger endothelial cells’ transition to be more like mesenchymal cells. Once they had identified those signals, they found that they could block the transition with compounds that targeted any of three different points along the signaling pathway. Even when the transformation had already occurred, they could coax the mesenchymal cells in leaky blood vessels to revert back to endothelial cells. Doing so stabilized the blood-CNS barrier. Damaged neurons began to recover, and the animals’ symptoms became less severe.

Further experiments are needed to better understand endothelial cells’ transition to mesenchymal cells and how to control it. But given the critical role of the blood-CNS barrier, Zhu and Odelberg are hopeful that reversing or preventing endothelial cells’ shift to mesenchymal cells could protect the CNS in people with MS—and possibly other neuroinflammatory diseases.

“Immunosuppressive drugs that are commonly used to treat MS can introduce some serious risks to the patient, but the evidence suggests that the therapeutic strategy we explored in this study does not affect the immune system, thus providing a possible way to treat MS without causing the severe side effects associated with immunosuppression,” Zhu says. “That’s the potential benefit for the future.”