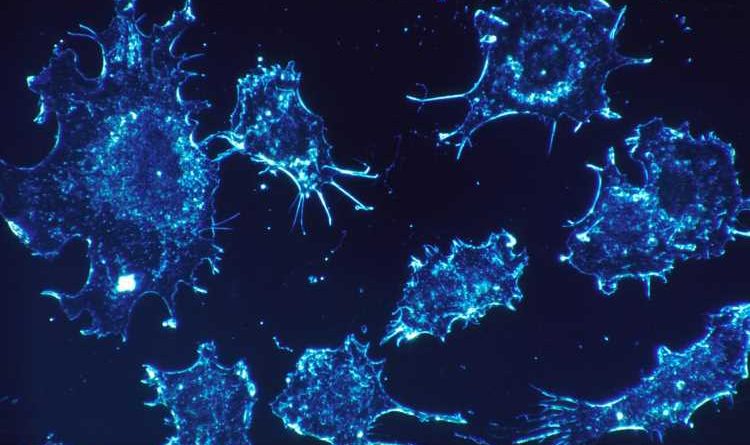 For most people who die of cancer, the spread of the initial tumor is to blame. “Metastasis is what kills most cancer patients,” says Serge Fuchs, a professor in Penn’s School of Veterinary Medicine. “Yet there are not many, if any, drugs that specifically target metastatic processes.”

In a paper in the journal Nature Cancer, Fuchs teamed with researchers from around campus and elsewhere to overcome that lack, studying the molecular players that foster cancer’s spread and identifying a strategy to stop it. Using an inhibitor of the enzyme known as p38α kinase (p38), they successfully reduced the spread of melanoma in a mouse model, significantly prolonging survival time.

“In my opinion, this kind of therapy could be used in conjunction with surgery to remove the primary tumor or perhaps other cancer treatments, such as chemotherapy,” says Fuchs.

The study emerged from conversations and collaborations that have been ongoing for years among Penn groups, including those of Penn Vet’s Ellen Puré and the Perelman School of Medicine’s Constantinos Koumenis, Sandra Ryeom, and Ben Stanger, as well as the nearby Wistar Institute’s Dmitry Gabrilovich. All focus on different aspects of cancer biology.

Many of these conversations revolved around what are known as tumor-derived factors (TDF): the various proteins, lipids, vesicles, genetic material, signaling molecules, and other compounds that tumors secrete and which, in some cases, travel around the body. Scientists believe many of these factors help “prepare the soil,” as it is often described, for the growth of metastases, making areas in the normal tissues more hospitable to tumor cells that are likewise traveling the body and disseminating to these areas.

Aiming to focus on what united metastases, the researchers initially looked for elements that distinguished melanoma tumor cells that tended to be more metastatic from a melanoma cell line that was less so. When they introduced TDF from the more aggressive disease into normal mice, these animals developed pre-metastatic niches: areas conducive to the development of cancer metastases. Animals that received TDF from a less aggressive form of melanoma hardly developed these niches.

To confirm that this enzyme was important in the metastatic process, the team tried two tactics: either eliminating the enzyme using genetic manipulation or blocking the effect of the kinase’s activity using an inhibitor that stopped the pathway it activates.

“By doing either of these, we didn’t get a pre-metastatic niche,” says Fuchs.

To give their findings a clinical context, they looked at white blood cells from patients with melanoma. Those who did not have signs of metastasis had significantly lower p38 activation than those with a diagnosis of metastatic disease.

Next they examined the lungs of mice that were given the TDF from a metastatic cancer to learn more about what p38 was doing to cultivate the pre-metastatic niche. The team found that activation of p38 by TDF in lung fibroblasts, which are connective tissue cells, increased the fibroblasts’ activity and stimulated production of fibroblast activating protein (FAP), a molecule which Puré has long focused on and which has been shown to influence tumor growth and metastasis. Production of FAP then helped to recruit immune cells called neutrophils, which further acted on the pre-metastatic niche areas within lung tissue to augment their ability to trap and stimulate the growth of metastatic cells.

Hoping to prevent the formation of this niche and, ideally, metastasis, Fuchs and colleagues treated mice with two different inhibitors of p38, while also surgically removing their primary tumors. Both treatments suppressed the spread of cancer to the lung and prolonged the animals’ survival.