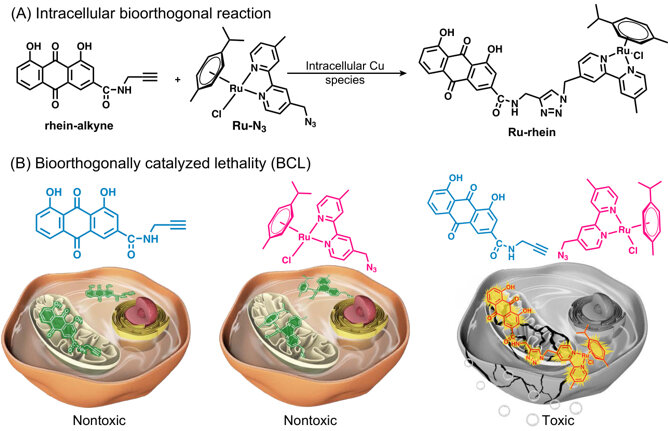 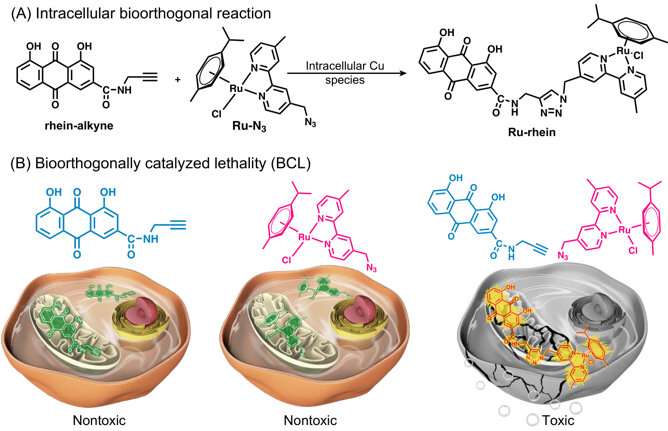 Cancer is the second leading cause of death in the world. The number of deaths and incidences is increasing each year. The metal-based anticancer drugs were used clinically worldwide, but suffer from poor selectivity, serious side effects and drug resistance. Tumor-targeting drug development is the basis for precise cancer treatment.

Recently, Professor Hongke Liu of Nanjing Normal University, Professor Jing Zhao and Academician Zijian Guo of Nanjing University have made breakthrough achievements in anticancer drug development. They proposed a “bio-orthogonally catalyzed lethality” (BCL) strategy (Figure 1) and published their results in National Science Review (NSR). The BCL strategy uses tumors as manufacturing factories to generate a highly potential tumor-targeted drug Ru-rhein, which can selectively kill cancer cells and tumors in tumor-bearing mice, while no toxicity on normal cells. BCL strategy generates targeting drugs from non-toxic compounds within the tumor, not only avoiding the decomposition and inactivation of the drug during transportation and storage, but also reducing the serious side effects caused by interacting with biologically active molecules during treatment.

The copper content in tumor cells is much higher than that in normal cells. The targeting drug Ru-rhein is generated from two non-toxic compounds Ru-N3 and rhein-alkyn within tumor with a yield of more than 80%, by using the endogenous copper-catalyzed bioorthogonal reactions. However, the above-mentioned reactions hardly occur in normal tissues. Thus tumor targeting and selectivity of Ru-rhein is realized by BCL strategy. Ru-rhein exhibits high anti-cancer activity, especially towards lung cancer cell A549, almost as toxic as cisplatin, while it is non-toxic to normal lung cell HLF and might be used as a candidate drug for clinical development (Figure 2). Ru-rhein targets the mitochondria of tumor cells and causes autophagic cell death through the mitochondrial pathway. 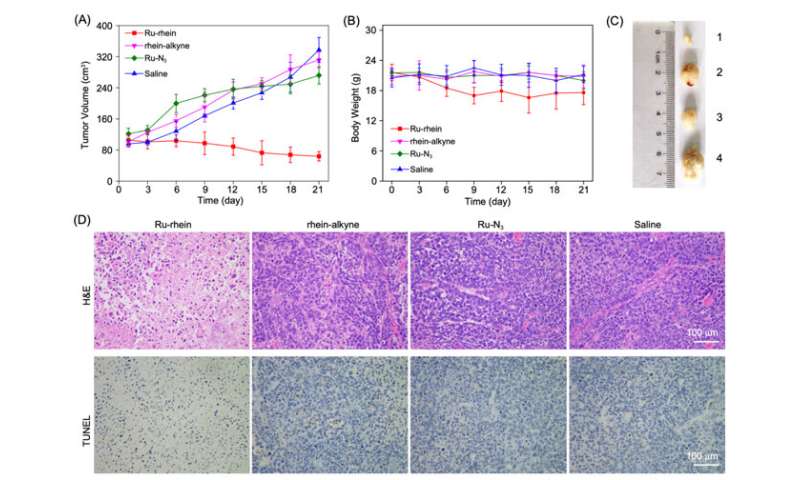 A mouse model was used to validate the BCL strategy. Compared with the control group, tumor growth of the tumor-bearing mice injected with Ru-N3 and rhein-alkyn was significantly inhibited, and other organs were almost undamaged (Figure 3). The generality of the BCL strategy was demonstrated in the generation of osmium and iridium-based metallodrugs within tumor cells.