Home » Health News » Are you an ‘active couch potato’? How sitting all day can erase a workout

Did you work out for 30 minutes today? Did you spend the rest of the day staring at your computer and then settle in front of the television at night?

If you answered yes to both questions, then you meet the definition of what scientists call “an active couch potato.” It means that, despite your commitment to exercise, you could be at risk for a variety of health problems, according to a sweeping new study of how people move – or don’t move – throughout the day. 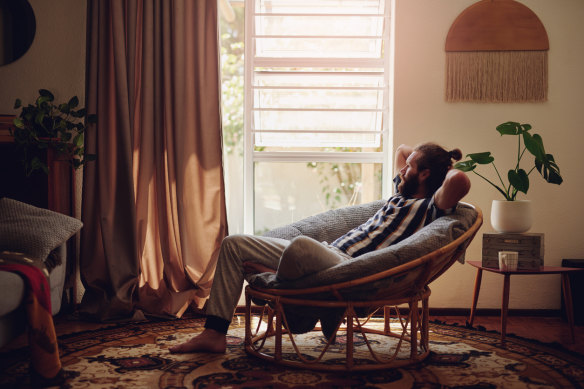 The study, which involved more than 3700 men and women in Finland, found that many dutifully exercised for a half-hour, but then sat, almost nonstop, for another 10, 11 or even 12 hours a day. These were the study’s active couch potatoes, and their blood sugar, cholesterol and body fat all were elevated.

But the study found, too, that men and women who got up and moved around even a little more often, whether by strolling gently or fitting in more exercise, were substantially healthier than the active couch potatoes.

The results tell us that a single 30-minute, daily workout “might not be enough” to alleviate the downsides of prolonged sitting, said Vahid Farrahi, a postdoctoral scientist at the University of Oulu in Finland and lead author of the new study.

In other words, if we exercise but also sit for the rest of the day, it’s almost as if we had not worked out at all.

The good news is that a few simple steps – literal and otherwise – should safeguard us from becoming an active sofa spud.

The perils of being sedentary

The World Health Organisation and other experts advise us to work out moderately for a minimum of 30 minutes most days of the week. A brisk walk counts as moderate exercise.

Substantial scientific evidence shows this half-hour of exertion buoys our health, spirits and life span. The problem is how we spend the remaining 23½ hours a day.

“It’s only in the last five years or so that we’ve begun to understand that physical activity isn’t the whole story,” said Raija Korpelainen, a professor of health exercise at the University of Oulu and co-author of the new study.

In the past, most research examined sitting and exercise separately and tended to ignore or downplay light activities such as ambling to the mailbox or fetching another cup of coffee.

So, for the new study, which was published in July in Medicine & Science in Sports & Exercise, Korpelainen and her co-authors turned to a large trove of data about almost every child born in Northern Finland decades ago. As they grew, researchers tracked their lives and health and, after the group became adults, asked 3702 of them to wear a scientific-grade activity tracker for at least a week.

The researchers could see, in six-second increments, whether someone was sitting, lightly strolling or formally exercising throughout the day. Because the trackers were measuring movement, standing counted as inactivity, like sitting. With that data, they characterised people, rather bluntly, by how they moved.

The active couch potatoes, who accounted for almost a third of the group, sat the most, lounging for more than 10 hours a day. They met recommended exercise guidelines – getting about 30 daily minutes of moderate exercise. But after that, they rarely got up, accumulating fewer than 220 minutes a day of light movement.

Another group likewise worked out for 30 minutes and sat for long hours. But, in between, they rose often and strolled about. Compared with the active couch potatoes, they spent about 40 per cent more time – nearly an extra 90 minutes each day – in what the researchers call “light activity.”

A third group sat, uninterrupted, for up to 10 hours, but also amassed about an hour of exercise most days.

The final group, which the researchers rightly dubbed “the movers,” did just that, exercising about an hour most days, while also moving lightly for about two hours more than the active couch potato group.

The other groups were all better off and to about the same extent, with relatively improved blood sugar control and cholesterol levels and about 8 per cent less body fat than the active couch potatoes, even when the researchers controlled for income, smoking, sleep habits and other factors.

The lesson from the research is that in addition to a brisk workout, we need to move lightly and often, cleaning, taking the stairs, strolling the halls or otherwise not remaining still. The sweet spot in this study involved about 80 or 90 extra minutes of light activity, “but any additional movement should be beneficial,” Farrahi said.

You can also try to squeeze in a little more exercise. In this study, people benefited if they doubled their workouts to 60 minutes, total. But, again, “do what you can,” Korpelainen said. Just adding an extra 10 or 15 minutes to a daily walk will matter, she said, even if you do not quite manage an hour of exercise.

“The goal is to be sitting less,” said Matthew Buman, a professor at Arizona State University in Tempe, who studies movement and metabolism but was not part of the new study. “We can each decide how best to get there.”

This study has limitations. It only looks at people’s lives at one point in time. It also involved Finns, most of them Caucasians and all somewhat active, who may not be representative of the rest of us, and did not include a completely sedentary comparison group.

Even so, “it should nudge us to think about how we spend our time,” Buman said, and perhaps reconfigure our lives and spaces so we move more. “Try putting the printer and recycling bins in another room,” he suggested, “so you have to get up and walk there.”

“I like to remind myself to go over and just look out the window often,” Farrahi said. “The solutions don’t have to be intimidating,” he continued. “Keep it simple. Try to move more, however you can, whenever you can and in ways that you enjoy.”

Make the most of your health, relationships, fitness and nutrition with our Live Well newsletter. Get it in your inbox every Monday.