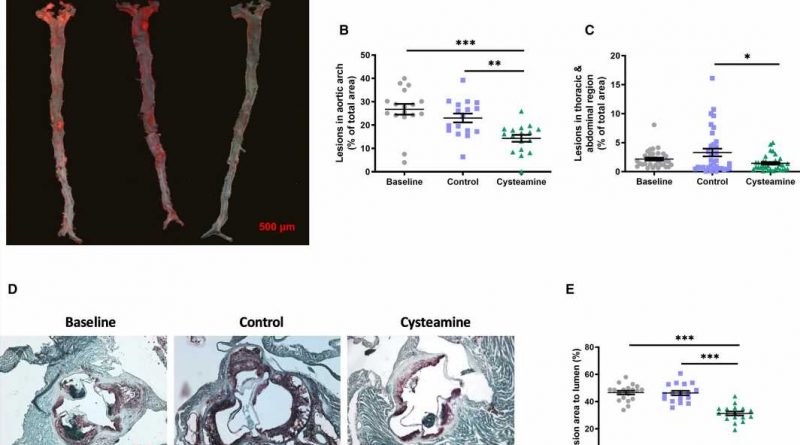 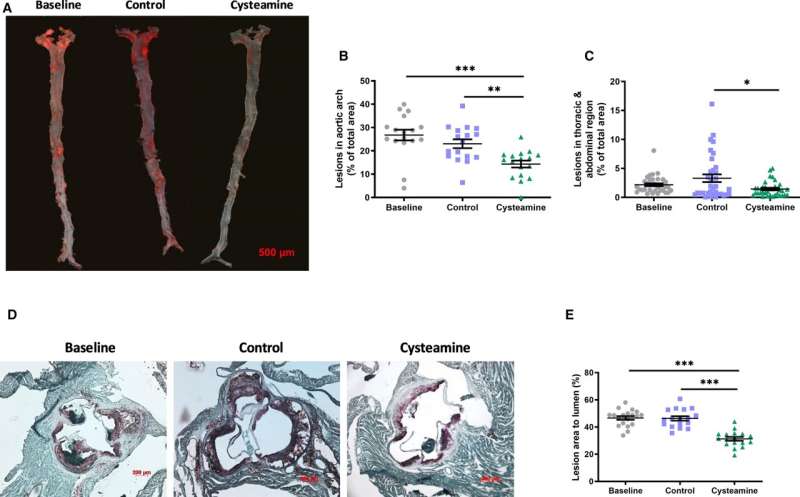 An antioxidant drug reverses atherosclerosis and could be used to prevent heart attacks and strokes due to clots, according to research funded by the British Heart Foundation (BHF) and published today in JAHA: Journal of the American Heart Association.

Atherosclerosis is the build-up of fatty deposits in the arteries. When a type of fat called LDL cholesterol becomes oxidized and builds up to form plaques in the artery walls, inflammation and damage increase which can cause the plaques to rupture and cause blood to clot.

These clots can block vital arteries that allow blood to flow to the heart, causing a heart attack, or to the brain causing a stroke.

Previously, researchers at the University of Reading discovered that LDL cholesterol can be oxidized in acidic small ‘bags’ called lysosomes in immune cells within the artery wall.

Now, Professor David Leake and his team have found that the antioxidant drug, cysteamine, has the power to switch off, and even reverse, this damaging process.

Cysteamine works by accumulating in the lysosomes and stops the oxidation of LDL cholesterol. It is already known to be safe in humans where it’s used to treat a rare lysosomal disease called cystinosis.

When the researchers looked at mice with atherosclerosis, those treated with cysteamine had a 32 to 56 percent reduction in the size of atherosclerotic plaques depending on the part of the aorta—the largest artery in the body—that was examined.

Antioxidant drugs that have previously produced promising results in mice have proven disappointing in clinical trials to treat cardiovascular disease, but the researchers hope that with these promising results, cysteamine will prove a successful treatment in humans.

Professor David Leake, Professor of Biomedical Sciences at the University of Reading who led the study said:

“The potential in this drug to protect against heart attacks and strokes and ultimately save lives superseded our expectations. We hoped it would cause plaques to grow at a slower pace, but we were amazed to find it reversed the process.

“Cysteamine would offer an entirely new way of treating atherosclerosis. We now want to look at the most efficient way to give this drug to patients, and hope that it can be taken to clinical trials in the next few years.”

“Heart attacks and strokes threaten the lives of people too often. In the UK, every five minutes someone is admitted to hospital with a heart attack, and the same is true of stroke. “The more ways we can find to treat the root cause of cardiovascular disease, the more lives and livelihoods that can be saved.