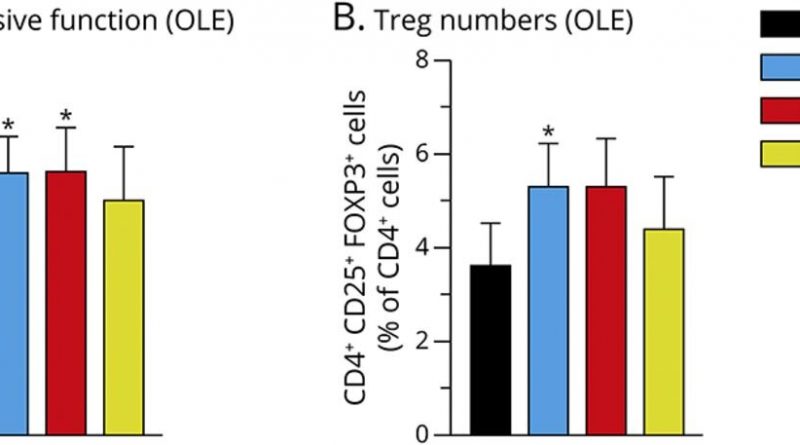 Removing ALS (amyotrophic lateral sclerosis) patients’ own dysfunctional cells, fixing them, then putting them back in patients’ bodies is a safe, well tolerated process that has been shown to slow or halt disease progression in a small number of patients, according to a study by the Houston Methodist Research Institute and Massachusetts General Hospital.

The study, published recently in the journal Neurology: Neuroimmunology and NeuroInflammation, was designed as a randomized, placebo-controlled, phase 2a trial with 12 participants followed by an open-label trial. But the unpredictability of the COVID-19 pandemic—which interrupted and even halted many research projects around the country—led to a reduction of the enrollment to 7 participants in the double-blind trial and 8 participants in the six-month open label trial.

Seven ALS patients completed the Group 1 randomized placebo-controlled trial, while eight participated in the Group 2 open label portion of the study. Both groups had dysfunctional regulatory T-cells—or Tregs—withdrawn from their bodies. When functioning normally, Tregs help reduce inflammation. In all but the placebo control group, researchers expanded the faulty Tregs to restore their function, then infused them back into patients’ bodies, along with a low dose of Interleukin-2 to help boost the immune system.

Results showed the Treg treatments were 100% safe and tolerable, and they remained biologically active in ALS patients for more than a year. The treatments also slowed or halted disease progression in most participants.

Participants included Houston Methodist patients Darci Garcia, enrolled in Group 1, and John Lay, from Group 2, both of whom reported a slowdown of ALS progression during and for a short time after the clinical trial treatments.

“We look forward to a much larger clinical trial that will allow for proper evaluation of clinical efficacy and further characterization of the long-term safety of this therapy,” said Dr. Jason Thonhoff, principal investigator. “These early results in a handful of patients are promising.”

The open label segment of this latest Treg trial led to a spinoff publication reporting the identification of two biomarkers that could potentially help track ALS disease progression and measure just how well ALS therapies work.