Warning labels on alcoholic products need to be updated to spell out details of potential harm in order to make them more effective, say two US researchers.

The current labeling, which has not changed for 30 years, focuses on risks during pregnancy and with operating machinery and includes a vague statement that alcohol “may cause health problems.”

This is “so understated that it borders on being misleading,” the two researchers argue.

The science related to the use of alcohol has moved on, and there is now firm evidence of harm. Alcohol has been classified by the International Agency for Research on Cancer (IARC)  as a group 1 carcinogen and has been linked to an increased risk of many types of cancer. Drinking alcohol has also been linked to a wide range of other diseases, from liver disease to pancreatitis to some types of heart disease, the authors note.

Yet the general public is mostly unaware of the most serious health risks that are associated with alcohol consumption, they point out.

“Designing and adopting new alcohol warning labels should therefore be a research and policy priority,” they add.

The two researchers set out their arguments in a perspective article published on September 1 in The New England Journal of Medicine (NEJM).

“Alcohol consumption and its associated harms are reaching a crisis point in the United States,” they point out.

It now accounts for more than 140,000 deaths per year in the United States, according to the latest data from the Centers for Disease Control and Prevention. The COVID-19 pandemic has made the problem even worse ― there was a 25% increase in alcohol-related deaths during 2020.

New, well-designed warning labels on alcohol is a common sense strategy for providing consumers with information and reducing the burden of alcohol-related harm, the authors suggest.

Warning labels are most effective when they are prominently displayed, when they include pictures of some type, and when the messages alternate so as to avoid any one message from becoming “stale,” the authors comment. This approach has worked well with cigarette packs. This type of warning has increased smoking quit rates in comparison with smaller, side-of-pack, text-only warning labels.

There is some evidence that this type of labeling can be effective for alcohol. When large, pictorial warnings about cancer risk were temporarily added to the front of alcohol containers in some stores in Yukon, Canada, alcohol sales declined by 6% to 10%, they point out. 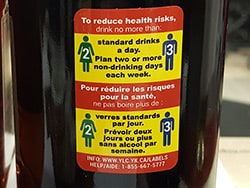 However, as previously reported by Medscape Medical News, pressure from the alcohol industry led to changes in the Yukon project, and while a general health warning remains, the label about increased cancer risk was removed.

The alcohol industry has tried to suppress efforts to educate the public, and this has created problems in conveying health information to consumers, the authors note. The industry spends more than $1 billion each year to market its products in the United States.

The authors caution that without government intervention, the alcohol industry has little incentive to communicate the risks.

Disturbingly, some companies even link their products to health campaigns, such as selling pink ribbon–themed alcoholic drinks during October to promote their efforts to raise funds for breast cancer research ― despite compelling evidence linking alcohol to an increased risk of breast cancer.

This is not the first call for a change in the warning labels on alcohol.

Last year, a number of medical groups petitioned Congress for a new cancer-specific warning label to be displayed on all alcoholic beverages.

The petition was signed by the American Society of Clinical Oncology (ASCO), the American Institute for Cancer Research (AICR), and Breast Cancer Prevention Partners, in collaboration with the American Public Health Association, the Consumer Federation of America, the Center for Science in the Public Interest, Alcohol Justice, and the US Alcohol Policy Alliance.

They are advocating for a label that would say: “WARNING: According to the Surgeon General, consumption of alcoholic beverages can cause cancer, including breast and colon cancers.”

In addition, the AICR is “working to advocate for the addition of a cancer warning label to alcoholic beverages through multiple channels,” she said. “Given the strong evidence linking alcohol use with at least six types of cancer ― and low awareness of the alcohol and cancer connection ― there is a tremendous need to educate the public about alcohol and cancer risk.”

Noelle K. LoConte, MD, an associate professor of medicine at the University of Wisconsin, Madison, who is the lead author of ASCO’s statement on alcohol and cancer risk, emphasized that there is no doubt that alcohol is a carcinogen, that it causes about 5% of cancers globally, and that its use has increased during the pandemic.

“Initiatives that raise awareness around this issue could help generate more public support for policies that limit alcohol access and thereby decrease the number of alcohol-associated cancers,” she said. “In ASCO’s statement on alcohol and cancer, we recommend several key strategies to reduce high-risk alcohol consumption, including limiting youth access to alcohol, giving municipalities more control over alcohol outlet density and points of sale, and increasing taxes on alcohol.”

However, she also had a small criticism of one point in the NEJM article. It shows a sample infographic that lists gastric cancer as being caused by alcohol. “But as of today, gastric cancer is not on the IARC list of alcohol-associated cancers,” she said. “I think this brings to mind one critical point, that these warning labels have to contain scientifically established facts.”

Grummon and Hall have disclosed no relevant financial relationships.

Roxanne Nelson is a registered nurse and an award-winning medical writer who has written for many major news outlets and is a regular contributor to Medscape.