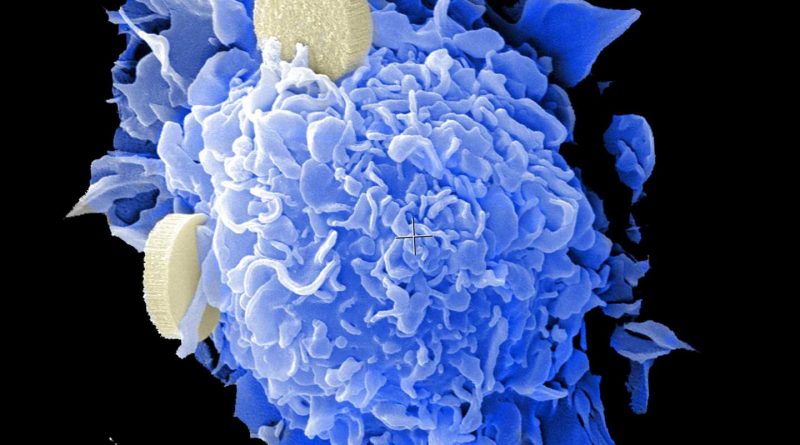 Cancer’s knack for developing resistance to chemotherapy has long been a major obstacle to achieving lasting remissions or cures. While tumors may shrink soon after chemotherapy, many times they eventually grow back.

Scientists once thought that unique genetic mutations in tumors underlay this drug resistance. But more and more, they are casting their eyes on other, nongenetic changes in cancer cells to explain their adaptability.

For example, one way that cancer cells can develop resistance is by changing their identity. A prostate cancer cell that is sensitive to hormone-blocking therapy might morph into a cell type that does not require the hormone for its growth.

Rather than specific mutations driving them, identity changes like these come about through changes in gene expression—cells turning specific genes on or off. As a result of these changes, a single tumor can become very different in its cellular makeup. This heterogeneity creates challenges for treatment, since a single drug is unlikely to work against so many different cell types.

A new study from a team of researchers at the Sloan Kettering Institute, the Koch Institute for Integrative Cancer Research at MIT, and the Klarman Cell Observatory at the Broad Institute finds that this tumor heterogeneity can be traced to a common source: a particularly flexible cell state that is characteristic of a subset of cells in a tumor and can generate many other diverse cell types.

“The high-plasticity cell state is the starting point for much of the heterogeneity we see in tumors,” says Tuomas Tammela, an Assistant Member in the Cancer Biology and Genetics Program at SKI and the corresponding author on the new paper, published July 23 in the journal Cancer Cell. “It’s kind of like a busy intersection of many roads: Wherever a cell wants to end up identity-wise, it has to go through this cell state.”

Because this cell state produces nearly all the cellular heterogeneity that emerges in tumors, it is an attractive target for potential therapies.

The particular tumors the researchers examined were lung cancer tumors growing in mice. Jason Chan, a physician-scientist doing a fellowship in the Tammela lab and one of the paper’s lead authors, says finding this unusual cell state was a surprise.

“This highly plastic cell state is something completely new,” he says. “When we saw it, we didn’t know what it was because it was so different. It didn’t look like normal lung cells where the cancer came from, and it didn’t really look like lung cancer either. It had features of embryonic germ layer stem cells, cartilage stem cells, and even kidney cells, all mixed together.”

Nevertheless, he and his colleagues found these cells in every tumor they examined, which suggested that the cells were doing something biologically very important.

The researchers identified these highly plastic cells by employing a relatively new laboratory technique called single cell RNA sequencing (scRNA-Seq). This technique allows researchers to take “snap shots” of individual cells’ gene expression profiles—revealing which genes are on or off. By performing scRNA-Seq on tumors as they grew over time, they were able to watch when and how different cell types emerged over the course of a tumor’s evolution. From these data, the researchers were able to create a kind of map of which cells came from which other cells.

“The map contains major highways and little dirt roads,” Dr. Tammela says. “The high-plasticity cell state that we identified sits right in the middle of the map. It has a lot of paths coming in, and it has even more paths coming out.”

This high-plasticity cell state emerged consistently in a tumor’s evolution and persisted throughout its growth. In fact, Dr. Tammela says, “it was the only cell state that we found to be present in every single tumor.”

Plasticity—the ability of a cell to give rise to other cells that take on different identities—is a well-known feature of stem cells. Stem cells play important roles in embryonic development and in tissue repair. Many scientists think that cancers arise from specific cancer stem cells.

But Dr. Tammela and colleagues do not think these high-plasticity cells are stem cells.

“When we compare the gene expression signature of these highly plastic cells to normal stems cells or known cancer stem cells, the signatures don’t match at all. They look completely different,” he says.

And unlike stem cells, they’re not there at the very beginning of a tumor’s growth. They only emerge later.

Many prior studies have looked for possible “resistance mutations”—genetic changes that account for a tumor’s ability to resist the effects of cancer drugs. While some have been found, more often the basis of resistance remains a mysterious. The new findings offer a potential solution to the mystery.

“Our model could explain why certain cancer cells are resistant to therapy and don’t have a genetic basis for that resistance that we can identify,” Dr. Chan says.

Importantly, it’s not all the cells in the tumor that are adapting, he explains. It’s a subset of the cancer cells that are just more plastic, more malleable.