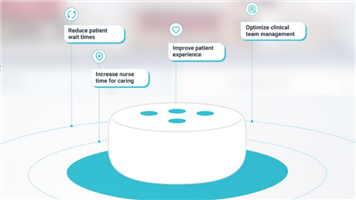 A few years ago, says Orbita’s EVP of Patient Care Solutions Nick White, the father of one of his colleagues fell in the hospital after routine surgery.

He’d needed to use the bathroom, White explained during a recent HIMSS20 Digital presentation, but a nurse hadn’t responded to his call for help. When he eventually tried to get up on his own, he’d slipped and fallen, breaking his hip.

Unfortunately, that led to a decline, White said during his talk, How Conversational AI Can Meet the Needs of Mobility Impaired and Isolated Patients. His colleague’s father eventually passed away while still in the facility.

The tragic circumstance led to White and his colleague to wonder what they could do from a tech standpoint to support providers in delivering care and prioritizing patients who need help more quickly.

After meeting with a care team, White and his colleagues established a number of ideal features for an improved call system, including contextual information, responses to patients and routing requests to the most appropriate person.

“We developed a smart speaker solution,” White explained. The tool, called OrbitaASSIST, involves “putting a smart speaker at a patient’s bedside, allowing the patient to speak their request, and for that request to be processed using a combination of machine learning and AI.”

That request then passes through a workflow queue and routes to a specific nurse or care worker for response.

“We can also go back to the patient and we can say, ‘We’ve let the nurse know. They’re on their way. But so that I can give them more information, can you tell me where you’re feeling the pain?” White explained.

“Essentially, every [patient] who is mobility impaired could use the solution today,” he said.

Orbita has tested ASSIST across three different facilities, White said, with high degrees of patient satisfaction – in part because the smart speaker allows them to listen to music or the radio in addition to using the platform.

A real focus for Orbita, White said, was how to “combat hospital-acquired complications, such as falls and pressure sores, through the use of linguistics on the virtual assistant.” White said one facility saw a 34% reduction in falls within the first year of using OrbitASSIST.

In a strikingly similar occurrence to the event involving his colleague’s father, White described an incident in one facility when a patient began falling in the bathroom.

The patient wasn’t able to reach the call bell, but they were able to wake up the smart speaker and ask for help, White explained.

Nurses arrived within 20 seconds: “They essentially caught that patient before they hit the floor,” White said.