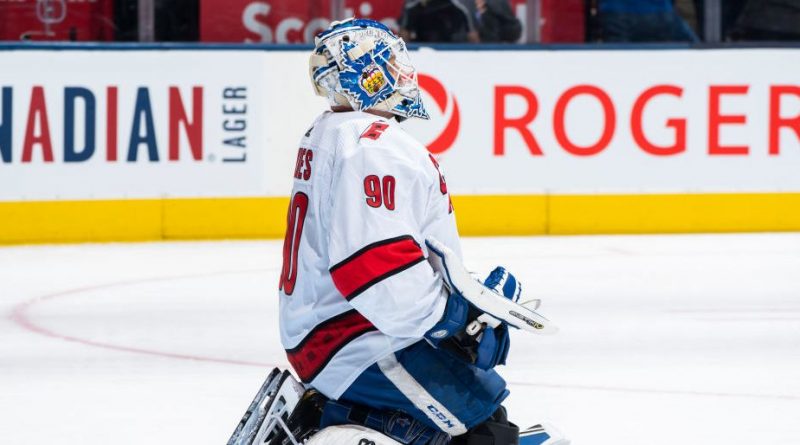 Dave Ayres was having a normal Saturday night with his wife watching the NHL’s Carolina Hurricanes play the Toronto Maple Leafs at Scotiabank Arena when Hurricanes goaltender James Reimer left the game with an injury.

That meant Ayres, a 42-year-old Zamboni driver who had a kidney transplant 15 years ago, had to leave the stands to put on his gear, on the off chance that something else might happen to the Hurricanes’ backup goalie, Petr Mrazek.

Every NHL team has a player like Ayres listed for emergency purposes—a backup-backup goaltender, who doesn’t expect to play, but exists as a failsafe option in the very rare case that both goaltenders are injured.

For Ayres, that exact scenario came true: In the middle of the second period, Mrazek collided with Toronto Maple Leafs forward Kyle Clifford and suffered an injury. He left the game.

That meant Ayres, a practice goalie for the Maple Leafs and the Toronto Marlies, the Leafs’ AHL affiliate, would have to be pressed into action—making him the oldest player in NHL history to make his debut. As Ayres described the moment to the AP after the game, “I had a couple of text messages that told me to get in there. I hadn’t seen the footage (of Mrazek’s injury). I was in the media room by myself and a guy came in and said, ‘Get going. Get ready.’”

Here’s something you don’t see every day.

Things didn’t go smoothly at first for Ayres: He let in two of the first three shots, but thanks the Hurricanes’ commanding lead earlier in the game, the team remained ahead 6-3. Following a pep talk from his teammates, Ayres calmed down and settled in, making 7 saves en route to a dramatic—and for many fans, unforgettable—victory.

Dave will be getting royalties, but we are also working with him to identify a kidney foundation that will receive a portion of the proceeds https://t.co/RwSNg12DA4

“[The] guys were awesome,” Ayres told reporters after the game. “They said to me, ‘Have fun with it, don’t worry about how many goals go in, this is your moment, have fun with it.’”

In an emotional post-game speech, Hurricanes head coach Rod Brind’Amour addressed the team. “All you have is the memories you got, and you guys just gave me one. You gave each other one. And that’s a memory I’m gonna have forever,” he said.

A memory we’ll all have forever pic.twitter.com/LUxqs8o3Wr

“The way you guys played in that third period—for you,” he added, indicating Ayres. “And the way you played for us. I don’t know what your song is—but f—k it, pick a song.”

Following the game, the Hurricanes also put merchandise up for sale on the team’s website honoring “Hurricanes legend Dave Ayres,” and said they’ll work with Ayres to identify a kidney foundation to receive some of the proceeds. North Carolina Governor Roy Cooper also tweeted his intention to make Ayres “an honorary North Carolina citizen after courageous @Canes win.”

For his efforts, Ayres received a $500 game check. He also kept the jersey.