Home » 16 Unhealthy Foods That Aren\u2019t That Bad For You, According To Nutritionists

We’ve basically been conditioned to believe that certain foods are unhealthy, meaning that if you’re trying to diet or eat as healthily as possible, you should avoid them at all costs. Aside from the fact that restrictive dieting is never a great idea, you might also be surprised to learn that many of the foods that have always been called “bad” for you are actually really not as terrible as they seem. In fact, many of those foods can be part of a wholesome, healthy diet as long as they’re eaten in moderation, like nearly everything else.

We spoke to nutritionists and dietitians to get the truth. Here’s a look at some classic “unhealthy” foods that really aren’t that bad for you. 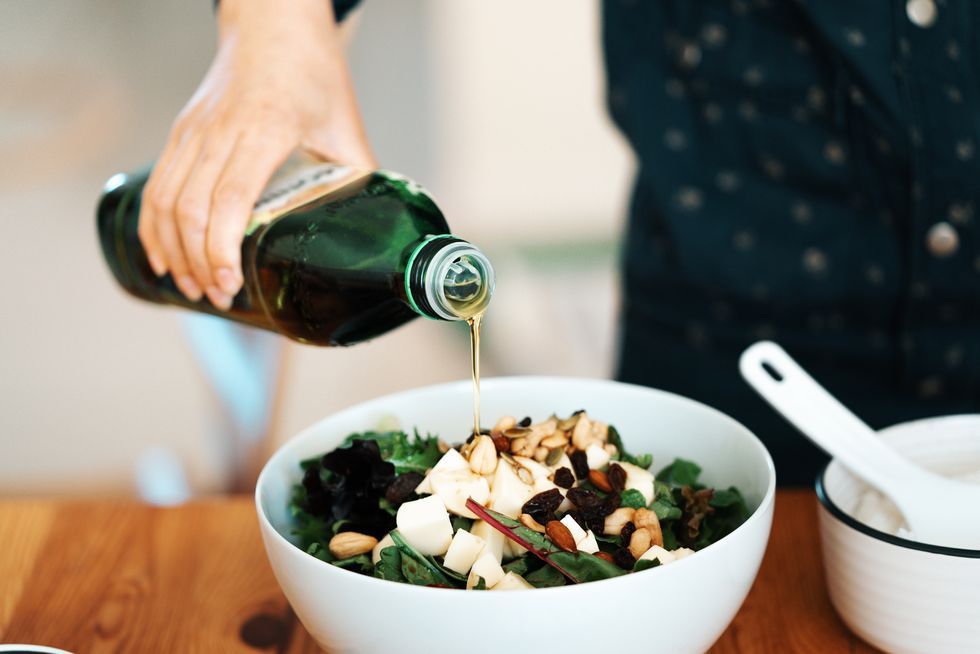 Oil gets a bad rap for being full of fat. While you don’t want to drench your foods in the stuff, oil is the good kind of fat that can be healthy for you. Of course, it depends on which type you’re using: “Some oils are better than others in terms of the type of fats each is made up of, as well as the level of processing needed to extract it,” John Fawkes, NSCA-certified personal trainer, Precision Nutrition certified nutritionist, and managing editor at The Unwinder, explains. 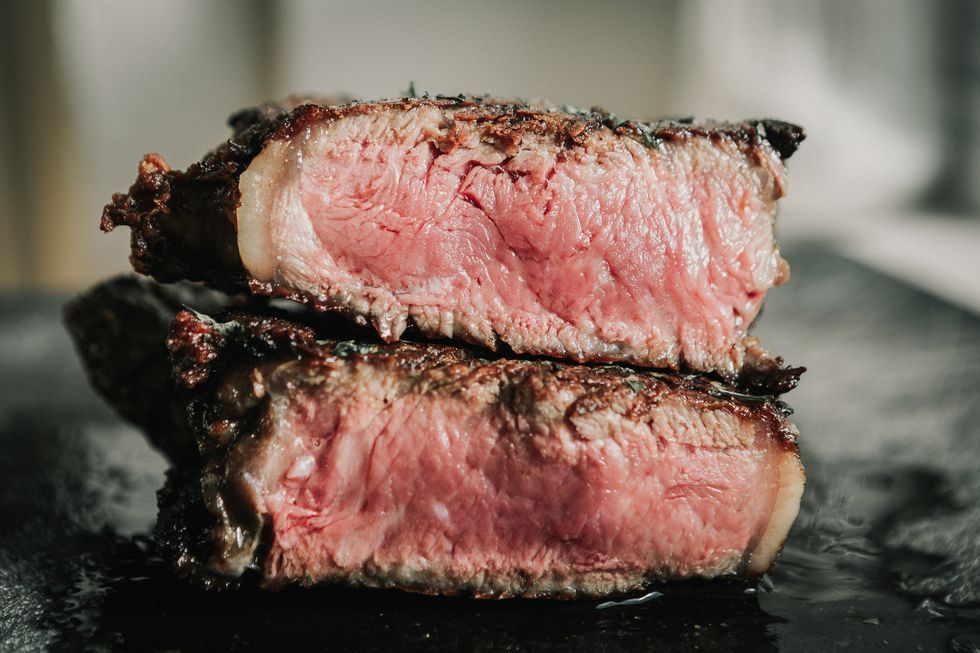 Red meat certainly isn’t perfect, but it also isn’t something you need to avoid completely. “Red meat has often been associated with coronary artery disease risk, but a study in 2012 indicated that the risk varies based on processing, with a lot of those differences based on the amount of sodium in the processed meat (hot dogs, bacon, cold cuts),” Dr. Alex Schwartz, nutrition scientist and curriculum designer at Precision Nutrition, tells us. “Red meat is a source of protein and high in iron and vitamin B12.” Basically, just be picky and choosy about your red meat—opt for a piece of steak over a pile of bacon, for example. 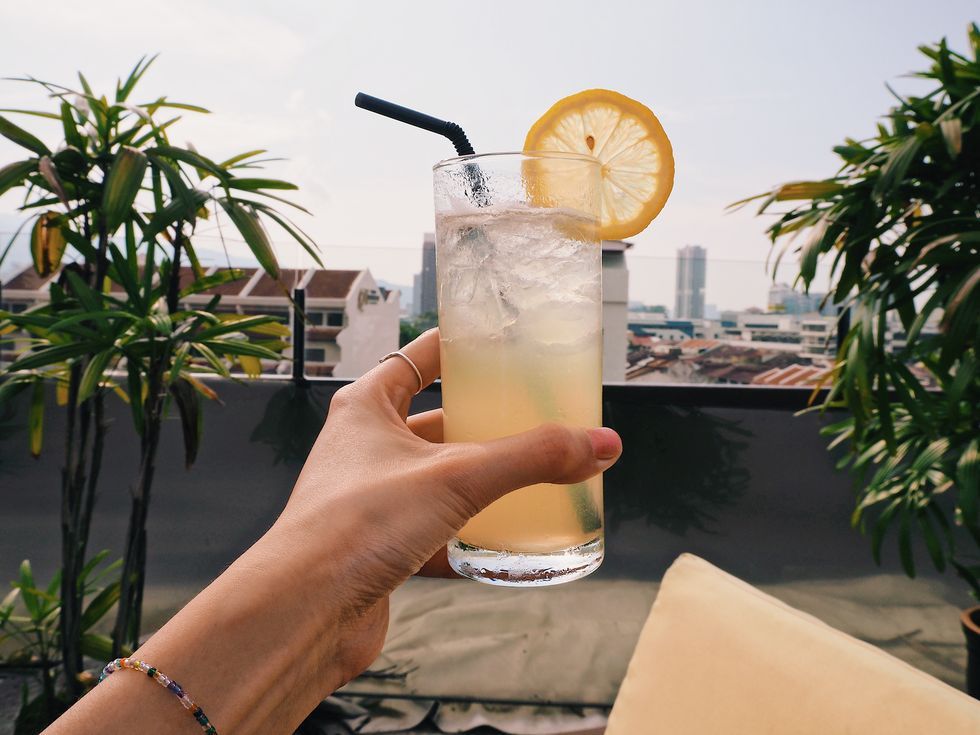 Does living a healthy lifestyle mean giving up booze for good? Nope! “You can totally have a few drinks a week and it isn’t going to kill your healthy lifestyle,” Lindsay Wandzilak, NASM certified trainer, nutritionist, and founder of The Daily, notes.

If you’re going out for a drink or two, Wandzilak recommends opting for tequila. “Tequila is plant-based and our bodies do a better job metabolizing it, meaning less of a hangover, less inflammation, less starch-based calories and belly fat,” she says. “Tequila in moderation with simple and fresh mixers like fresh squeezed lime juice, water, and agave are easier for the body to metabolize as far as liquors go.” 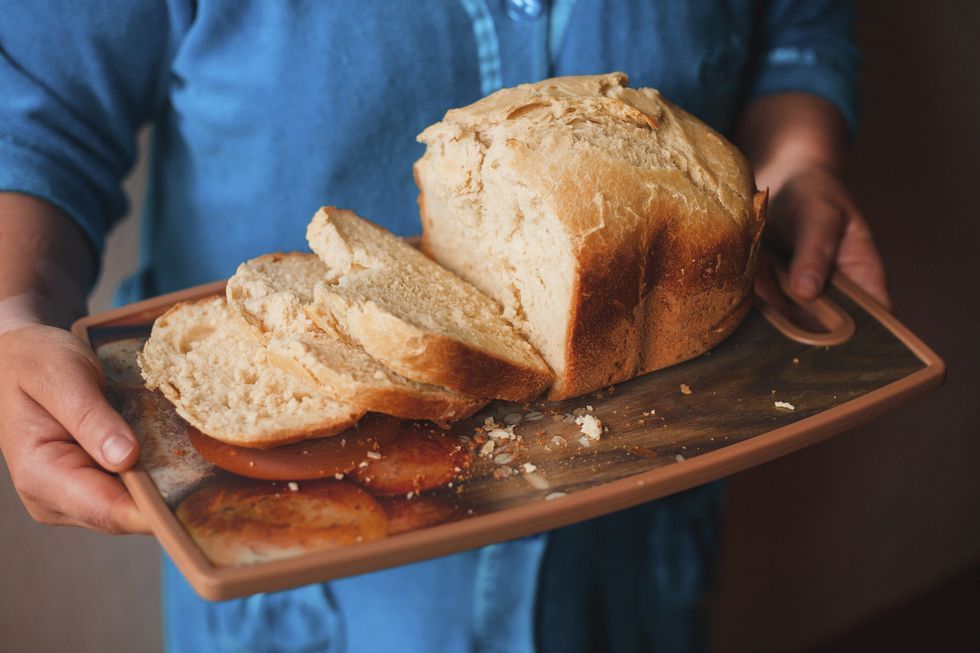 Many people in the health community wouldn’t even consider eating a slice of white bread—it can sometimes seem like it’s whole wheat, multi-grain, or bust. But if you eat the right kind of white bread, it’s not going to set you back. “Typical grocery store white bread doesn’t really have any nutritional benefits since the process of making it involves white flour, which only uses the endosperm of the wheat,” Dr. Schwartz explains.

His solution for those who prefer white bread? Make it yourself: “This way you can control the ingredients that go in and don’t need to worry about putting in additives that companies use which increases shelf-life and creates a fluffy consistency.” 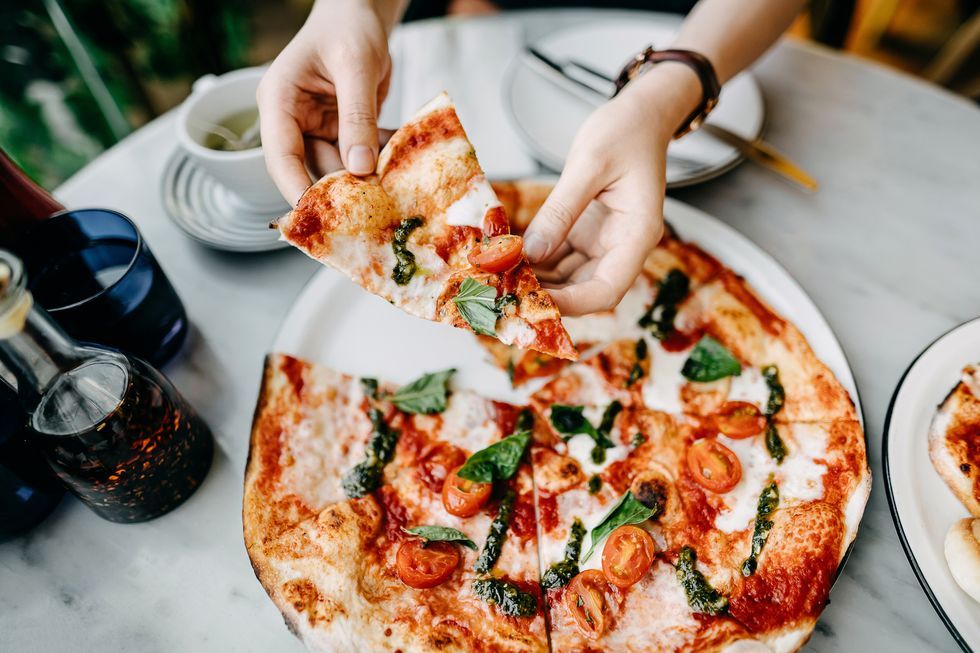 OK, it’s true: The greasy dollar-slice pizza down the block is not even close to the picture of health. But all pizza is not created equal, friends. “Pizza can be loaded with fat and calories, but it doesn’t have to be!” Donna Rose, registered dietitian of Nona’s Nutrition Notes, tells Delish. How can you make it a better option? Rose says to make your own pizza with a thin crust, topped with lots of veggies, tomatoes, and low-fat cheese. “Tomatoes provide Vitamins A and C, as well as potassium, phosphorous, folic acid, beta-carotene, and a host of other beneficial nutrients.” 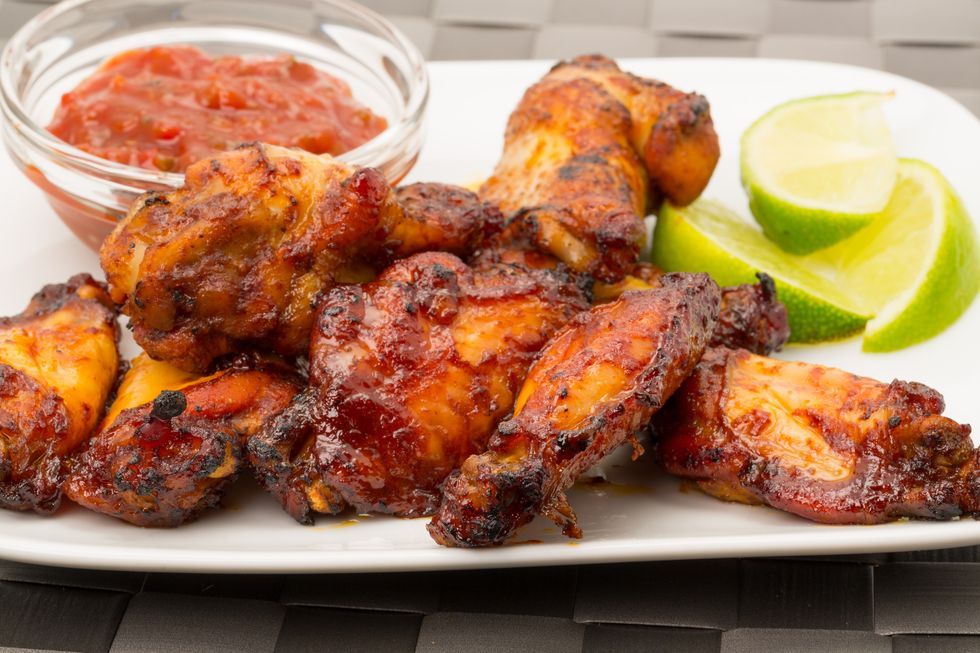 As long as you’ve made a few modifications to turn it from junk food to a delicious protein-packed snack, hot wings are “totally fine,” Wandzilak says: “No one will miss the grease and breading if you cook these high-protein treats cleanly with homemade, sugarless seasoning,” she says. “Simply rub/marinate on the skin itself and either bake, grill, or air fry!” 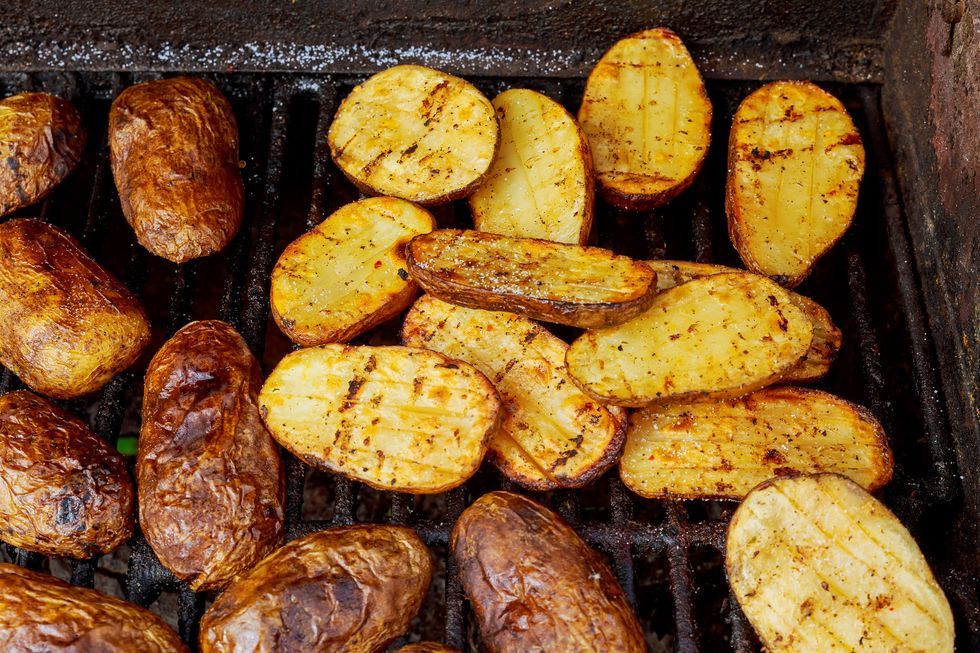 Eliminating carbs? Don’t toss your potatoes just yet. They’re actually good for you! “They’re one of the cost-friendliest and most nutrient-dense starches out there,” says Fawkes. “White potatoes come packed with B vitamins, potassium, folate, magnesium, and Vitamin C, plus a solid dose of fiber per serving. Stick with baked and air fried dishes to reap the most health rewards.” Of course, sweet potatoes are also a delicious option. 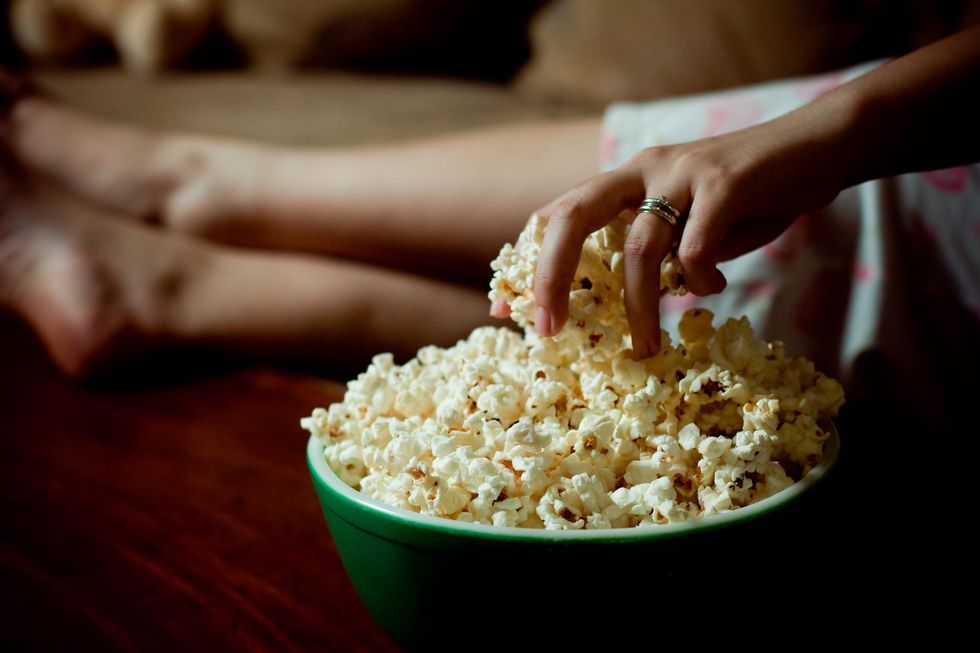 Sometimes you just need a salty, crunchy snack, you know? When the cravings hit, heat some corn kernels over the stove and make a bowl of popcorn. “Popcorn is a high fiber snack that often gets a bad rep,” registered dietitian Claudia Hleap, LDN, tells Delish. “Popcorn is a whole grain, making it a good source of fiber. It’s also full of popped air, meaning that it is less calorie dense than many other chip-like options.” 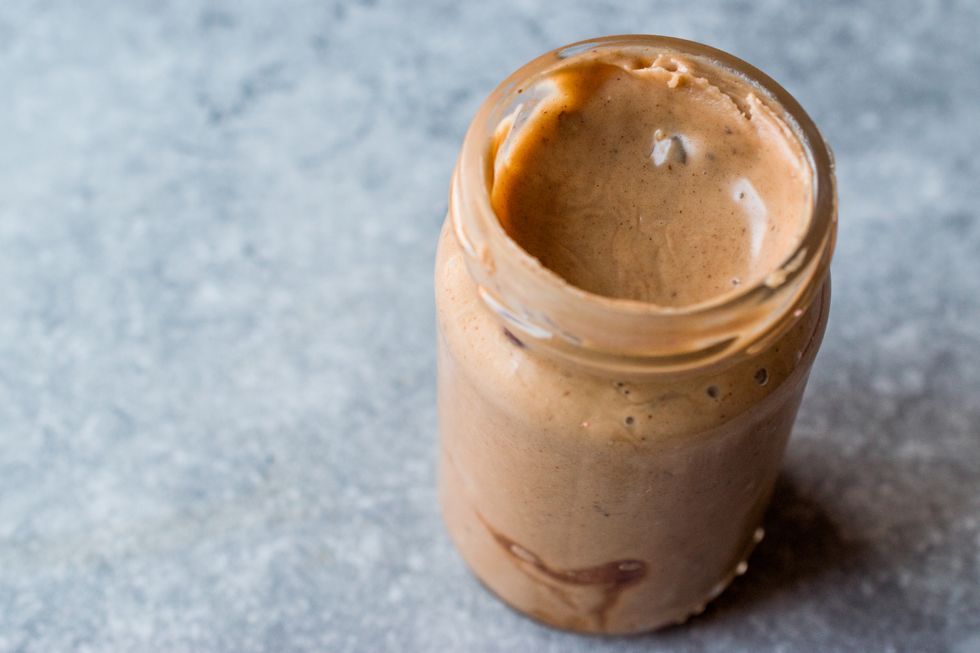 Peanut butter, even the natural kind, is calorie dense, which can lead one to believe it should be avoided. This couldn’t be further from the truth. Tori Jensen, registered dietitian at ah.mi Health, offers that many brands add loads of hydrogenated oils and sugars to peanut butter, which is what makes it “bad” for you. The key is buying natural peanut butter, made only with peanuts and salt. Jensen also points out that peanuts aren’t nuts, they’re actually peas. 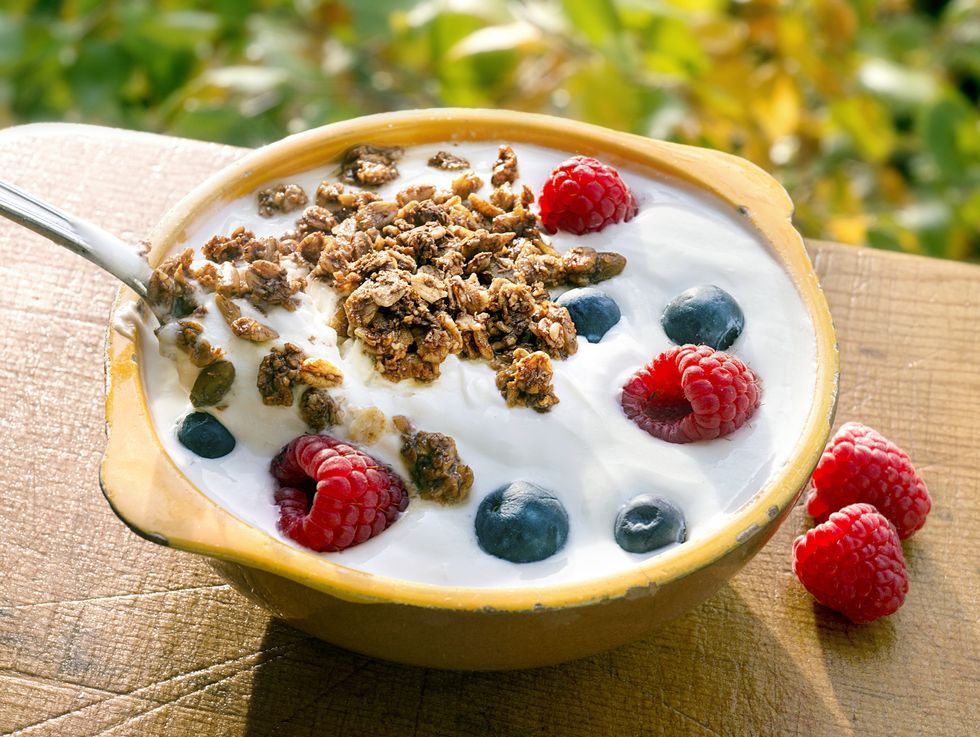 It’s well past time to stop assuming that something low-fat is automatically healthier than something full fat. Take yogurt, for example. “Whole yogurt, especially the plain variety, offers a creamier yogurt which is still high in calcium and offers protein,” says. Dr. Schwartz. “Recent evidence also suggests that full-fat dairy products, particularly yogurt and cheese, don’t have the negative effects we thought they did on insulin sensitivity, blood lipid profile, and blood pressure as previously predicted on the basis of their sodium and saturated fat content. Additionally, they don’t seem to increase cardiometabolic disease risk and in some cases, might actually protect against cardiovascular disease and type 2 diabetes.” 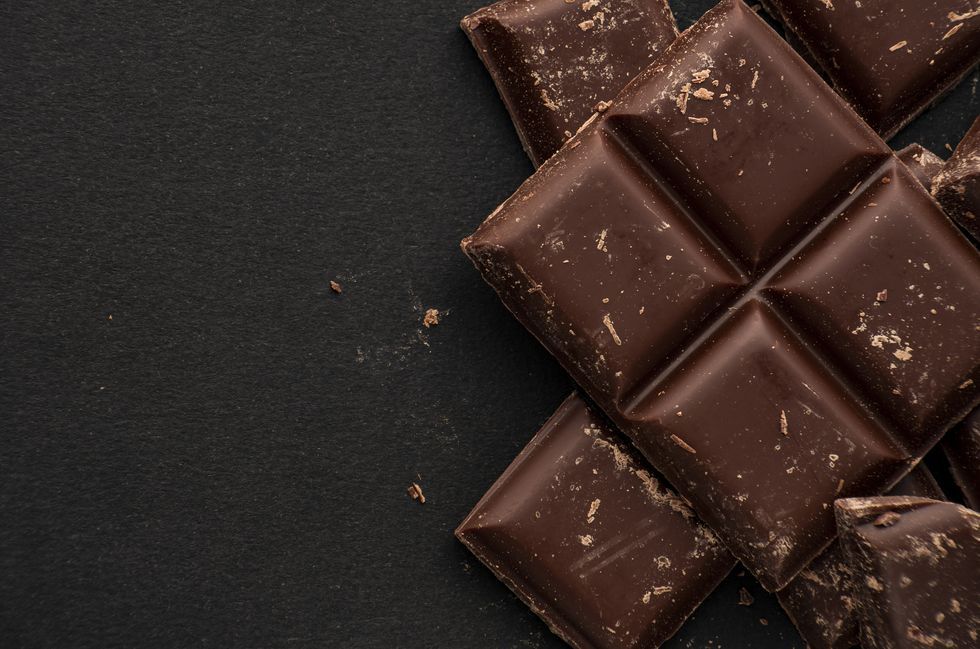 Chocolate seems like the ultimate treat because it is…and when you buy the right kind, it’s also downright good for you. “Dark chocolate, with greater than 70 percent cacao, contains probiotics, which help lower cholesterol,” says Rose. “Dark chocolate, rich in polyphenols, has antioxidant and inflammatory properties which disarm unhealthy free-radicals that cause disease.” Eat that bar of chocolate! 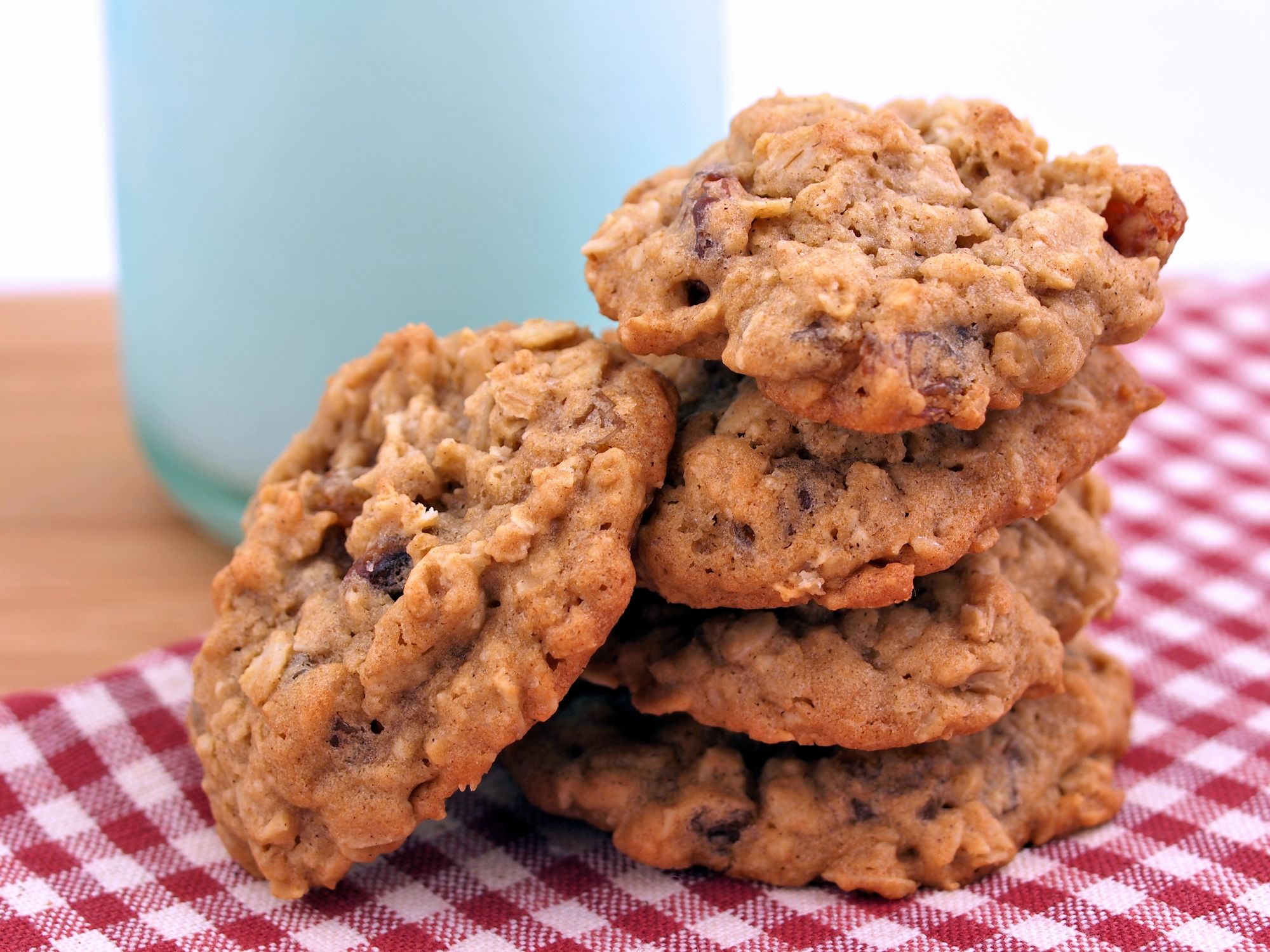 Need a cookie, like, now? Whip up a batch of easy oatmeal cookies to satisfy your craving in a super healthy way. “I would recommend making homemade oatmeal cookies using raw oats, and nuts,” Jamie Hickey, certified personal trainer and nutritionist, and founder of Truism Fitness, tells Delish. This gives you a snack high in fiber, protein, and healthy fats. And, you know, it’s really good. 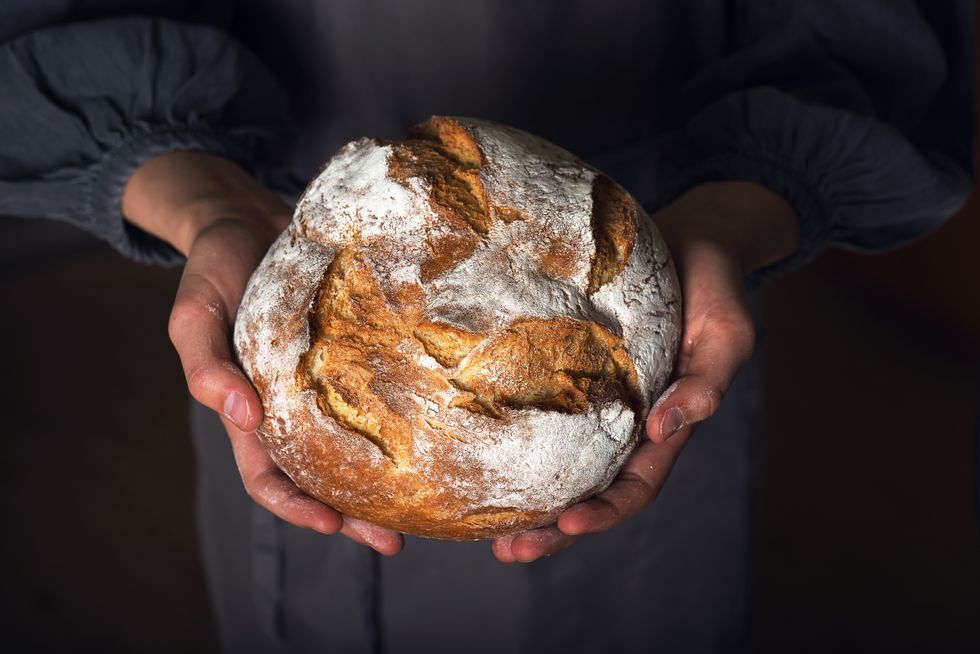 Let’s set the record straight: “Unless you have a diagnosed gluten allergy or Celiac’s Disease, there’s little research indicating you need to cut whole food gluten sources from your life,” Fawkes says. “Things like sprouted whole grains, wheatberries, farro, barley and many others can and should be part of a healthy diet. Plus, gluten-free versions of grain-based products tend to contain tons of additives and even sugar to make them taste comparable, which you don’t need.” 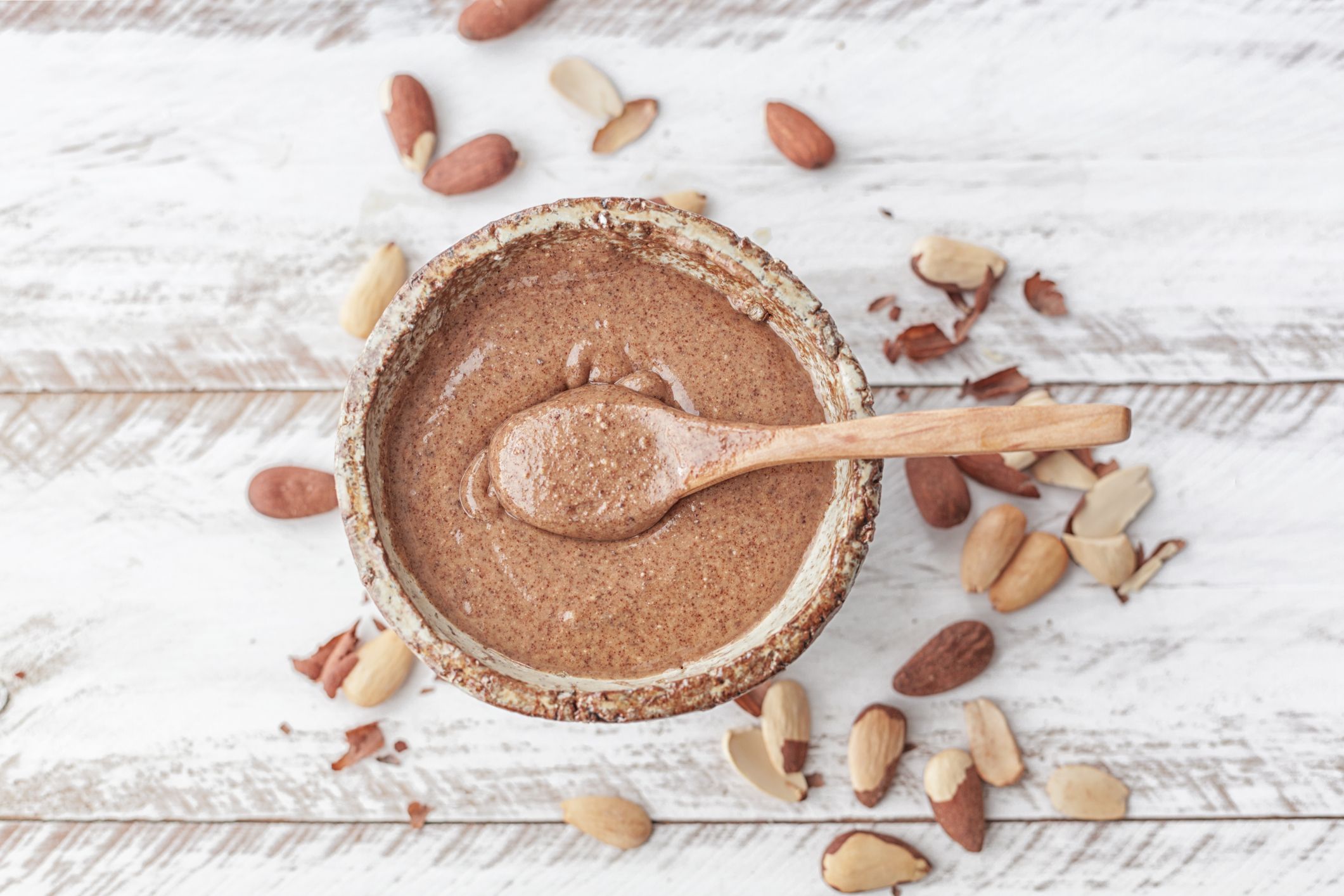 Peanut butter isn’t the only “butter” out there you shouldn’t avoid. Nut butters like almond and cashew are also really good for you. “These can get a bad reputation for being found in candy and high in fat, but they are completely fine and contain tons of healthy fats that keep us full,” Wandzilak says. “Make sure to mind the serving size, and read the nutrition label. Make sure your nut butter has three or less ingredients–none of which should be sugar!” 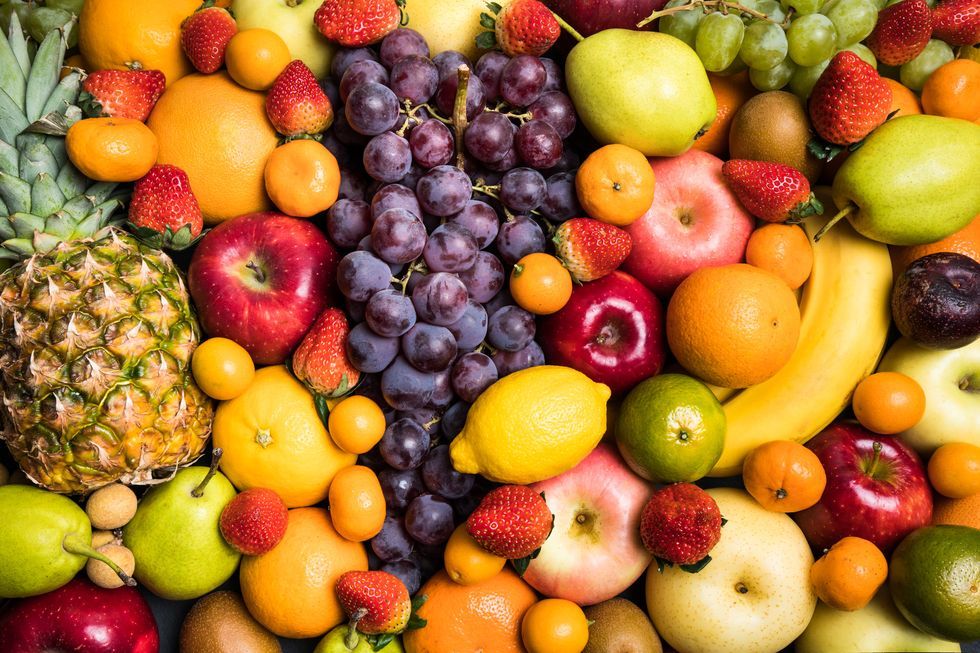 Fruit didn’t start to get a bad name until the keto diet took over. Now, it seems like people are avoiding it more and more, and Wandzilak says there’s no reason for that. “The facts are that fruit is filled with water, nutrients, and fiber that keep us hydrated and feeling great,” she says. If you want to get your daily dose of fruit in, go for whole, fresh fruits instead of juice or something dried. 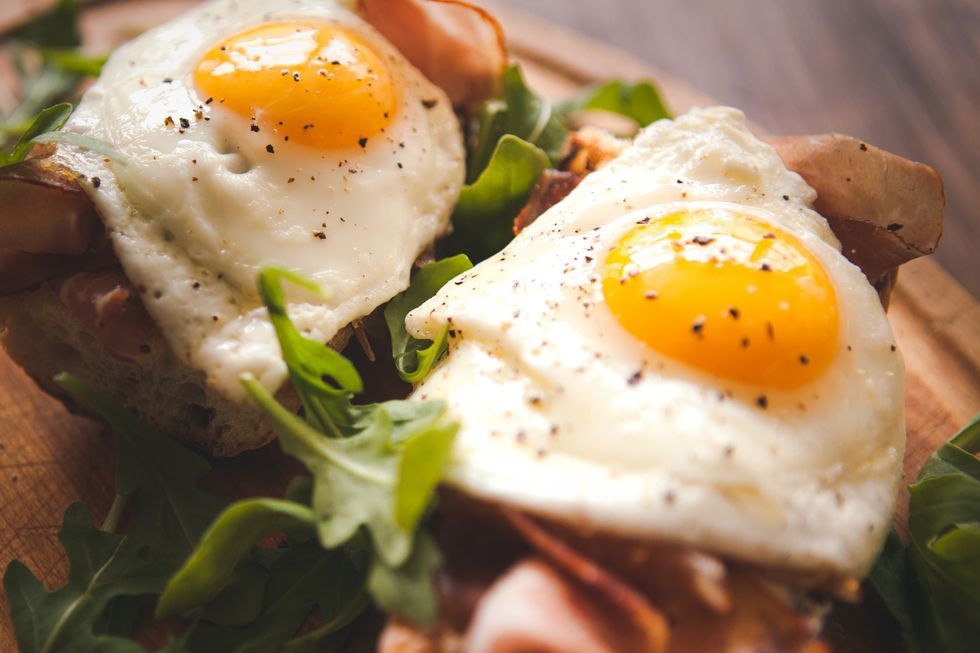 Egg whites are good, egg yolks are not so good, right? Wrong. “Egg whites became a thing when egg yolks got demonized for contributing to high cholesterol and heart disease,” Jensen says. While egg whites are good for you and full of protein, they don’t have the same nutrients as the yolk, which is high in cholesterol and fat. Jensen says they are “an excellent source ofprotein and essential vitamins and minerals.” 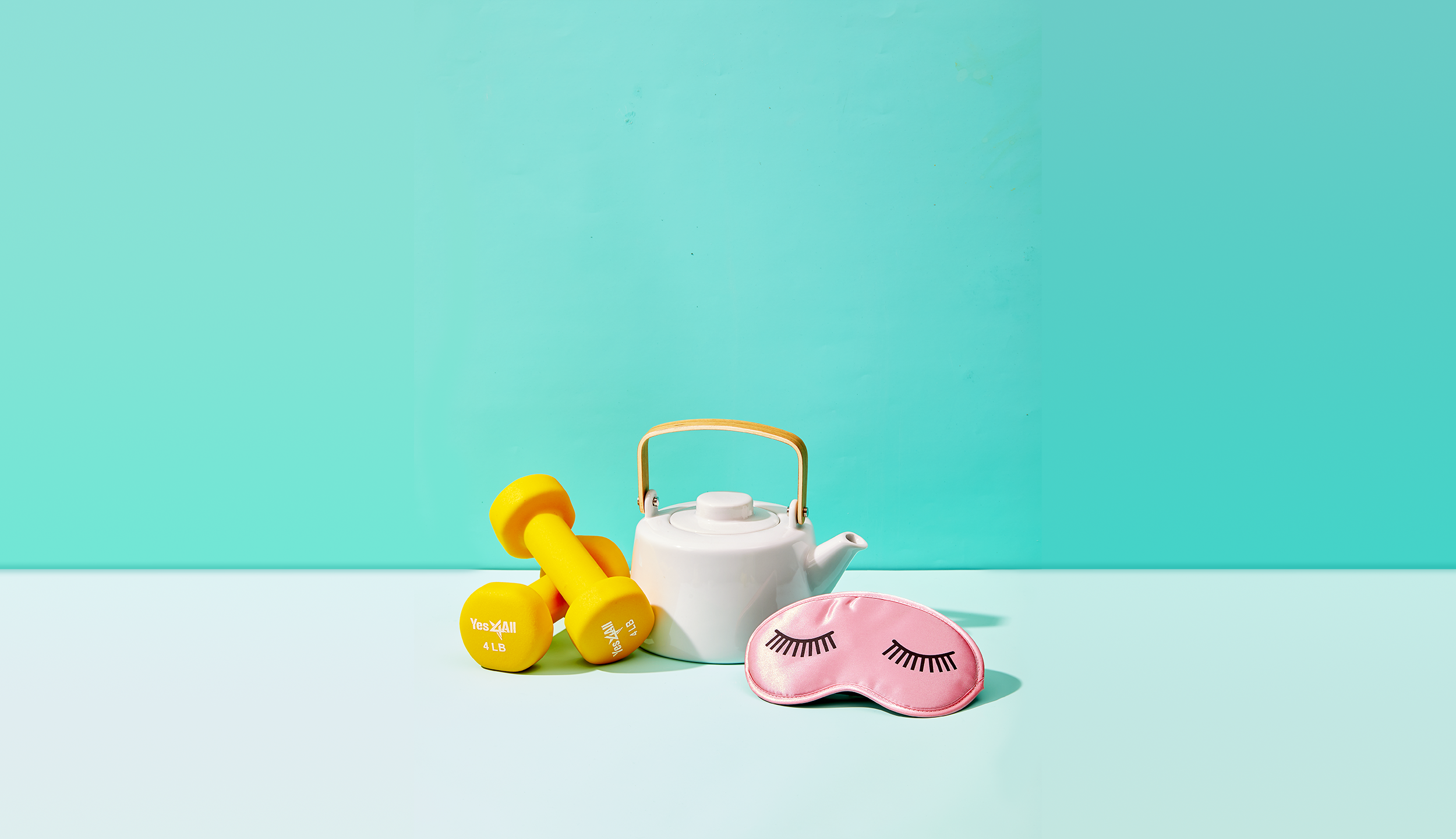