Home » Health News » 1,000 Americans Died of Coronavirus on Tuesday, Most Since Early June, as Cases Near 4 Million 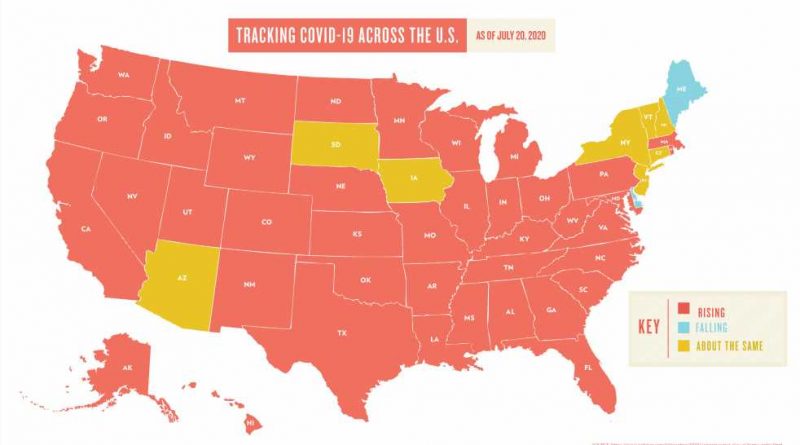 More than 1,000 Americans died from COVID-19 on Tuesday, the most since early June, as new infections continued to soar across the country.

The number of new deaths each day had been on the decline since the U.S.’s peak in mid-April, but as new infections soared after Memorial Day weekend, the death rate was expected to start climbing. After days of increases, the death toll reached 1,127 on July 21, marking the first time deaths have been over 1,000 since June 9 and the highest total since May 29.

At least 142,000 Americans have died from COVID-19 since the start of the pandemic in March, according to The New York Times’ database.

Over the last 14 days, new deaths from COVID-19 have been on the rise in 25 states, from California to Alabama, North Carolina to South Dakota.

Arizona nearly topped their record for new deaths on Tuesday with 123, slightly below their record from four days earlier of 136.

Florida had also repeatedly broken its record for daily deaths, with the highest, 156, occurring on July 16. The COVID-19 death toll in Florida is at least 5,205 as of Wednesday morning.

The national death rate is now trending upwards for the first time since April, when New York was dealing with overloaded hospitals. Nationally, an estimated 63 percent of hospital beds are currently occupied, according to the Centers for Disease Control, while several states — particularly Florida, Arizona and Texas — are dealing with major shortages.

The high number of deaths comes as the number of cases in the U.S. near 4 million, following two months of soaring infections in most of the country.

On Tuesday, after months of downplaying COVID-19 and disputing the high numbers of cases and deaths, President Donald Trump warned that the U.S. will continue to suffer from the virus in the near future.

“It will probably, unfortunately, get worse before it gets better," Trump, 74, said in his first COVID-19 briefing since April. "[That's] something I don't like saying about things, but that's the way it is. That's what we have."

He also encouraged Americans to wear masks after speaking dismissively about them in the past.

“Get a mask,” Trump said, while reading from prepared notes. “Whether you like the mask or not, they have an impact. They will have an effect and we need everything we can get."